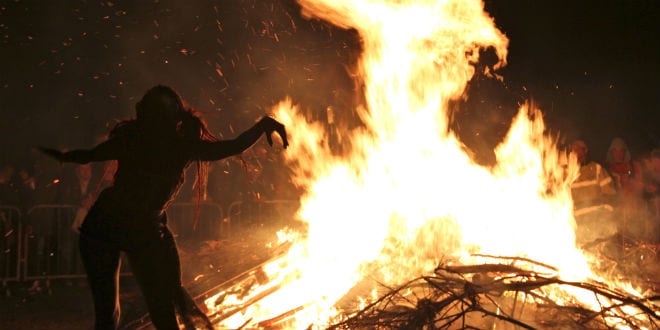 Whether by accident or design, the arrival in London of a full-size replica of an arch which stood on the site of the recently-destroyed Temple of Ba’al coincides with an ancient pagan festival that connects the modern replicas with their ancient roots: serving false idols.

The 28-meter tall 3-D printed model, created by the Institute for Digital Archeology, represents a famous arch of the original Temple of Palmyra in Syria, which drew 150,000 visitors a year until it was destroyed by ISIS in September. The first replica arch will be on display in London’s Trafalgar Square later this month during UNESCO World Heritage Week, beginning April 18th and ending on the 22nd, as a symbol of protest against religious extremism; another arch will rise in Times Square next autumn.

April 19th is not a meaningful date to most, but to occultists and worshippers of Ba’al, it is a most auspicious time. Halfway between the spring equinox and the summer solstice, it marked the first day of summer in ancient times, initiating a 13-day period known in the occult as “the Blood Sacrifice to the Beast”.  This period culminates in Beltane, the major festival for the worship of Ba’al – or, as it is known in the Western world, May Day.

This time period of the Blood Sacrifice was so significant that, after the pagans, the Romans celebrated a festival of fertility, called Fordicidia, on the same dates, beginning April 15th and ending April 19th with the festival of Cerealia.

Ba’al, worshipped by the Mesopotamians, was a major influence in ancient times. Mentioned more than 90 times in the Bible, most notably when Elijah defeated the priests of Ba’al in a contest to bring down fire from heaven to burn a sacrifice, Ba’al became the archetypical form of idol worship.

Though worshipping Ba’al and other idols is not especially prevalent in Western culture today, their holidays persist, taking on different meanings but retaining some of their ancient symbols and meaning. Fertility is symbolized in the Westernized version of the May Day holiday by the phallic Maypole ceremony. Bonfires, another prominent aspect of May Day celebrations, are reminiscent of the fires used for child sacrifices.

Beltane, an Anglicized reference to the god ‘Ba’al’, is still observed throughout Ireland, Scotland and the Isle of Man. At the same time the Arch of the Palmyra Temple of Bel is standing in Trafalgar Square, the Beltane Fire Festival will be held on the other side of England in Edinburgh. Beltane Fire Festivals are, in fact, held all over the world, perpetuated as part of ancient Gaelic culture. In an unfortunate misunderstanding of the festival’s roots, they are frequently billed as family events, with children being given special discounts.

Other Beltane festivals more closely resemble the original as it was celebrated in Palmyra so many years ago, with revelers painting their bodies and dancing around the bonfire, nude.

It is unlikely the Institute for Digital Archaeology, a joint project of Oxford and Harvard universities, or UNESCO chose the date for the Palmyra arch to stand in London based on pagan festivals. Nonetheless, it is an eerie coincidence.