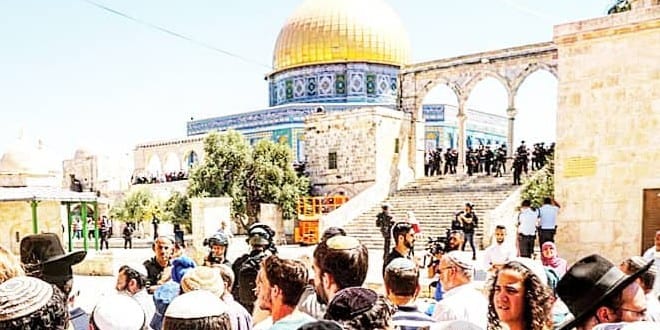 Israeli police told religious Jews who visit the Temple that in case of sirens, they should essentially drop to the ground and serve God in the manner Jews served God in the Temple.

Avraham Bloch, a Temple Mount activist, was on the Temple Mount on Tuesday when one of the Jews in his group asked the police escort what they should do in the case of a rocket attack.

An answer Isaiah would love

The policeman responded, “Drop to the ground and put your hands over your head.” The religious Jews in the group were surprised at the instructions since it is currently forbidden for Jews to lie on the ground on the Temple Mount and Jews who do so are forcibly removed from the site.

“That sounds like good advice to me,” Yaakov Hayman, chairman of the United Temple Movements, told Breaking Israel News. “If Israel is under attack, go to the Temple and serve God in the manner he told us to.”

Hayman was referring to the Biblical commandment of prostrating on the ground that can only be performed in the place where the Jewish Temples once stood. This commandment was described and prophesied by Isaiah as an essential element that will reappear in the times of the Messiah.

The word וְהִשְׁתַּחֲווּ (v’hishtachavu) is translated here as ‘worship’ but the more accurate translation would be ‘they will prostrate themselves.’

Rockets: a blessing in disguise?

In an ironic twist, it may be the Islamic Jihad who will bring about this Messianic scenario. On Tuesday, the Palestinian Islamic Jihad (PIJ) fired over 160 projectiles at Israel with some reaching as far as Tel Aviv. The PIJ released a statement that they intended to target Jerusalem in their next wave of attacks. If Color Red sirens sound in Jerusalem while Jews are on the Temple, Isaiah’s prophecy will manifest itself explicitly for the first time since the destruction of the Second Temple.

Will the rockets really reach Jerusalem?

Although no rockets have yet reached Jerusalem, in the map below, you can see that they are certainly progressing closer to Jerusalem.

“On one hand, the police were giving practical advice for what should be done in the case of a rocket attack. But these are Israeli police tasked with protecting the holiest site in the world. I am sure they had in mind, at least on a subconscious level, that when Israel is in dire straits and Jerusalem is threatened, turning to God is the only real solution” Hayman added.

It should be noted that Israeli law mandates equality and freedom of religion at all holy sites. The Israeli police are permitted to take into account security consideration and modify their enforcement of this law. For this reason, the Israeli police do not permit non-Muslims to pray or display religious items or symbols on the Temple Mount.

“It would be a good trial run for the Temple service and if we see that it works and the rockets don’t succeed in touching the ‘apple of God’s eye’ then we should continue,” Hayman said.

Hayman put the incident into a larger context.

“The problem with this solution to the Islamic Jihad attacks, on a spiritual and a practical level, is that simply reacting will never bring about a solution. We need to be pro-active. This problem has been festering. Ten years ago, the attacks were much less serious and dealing with it would have been less traumatic for Israel as well as the Arabs. As things stand now, they have untold thousands of rocket. The only real solution that remains at this point is to retake Gaza and to reestablish Gush Katif. And instead of 10,000 Jews in Gush Katif, we need 100,000. Jews living in Israel is the only practical and spiritual solution for the Islamic Jihad.”

A glimmer of hope

Assaf Fried, the spokesman for the Temple Organizations, explained to Breaking Israel News, that it may be that in the near future, Jews will be permitted to perform this Biblical commandment even in the absence of Islamic rockets.

“Nothing has been announced and no official changes have been ordered but the conditions for Jews on the Temple Mount have greatly improved. Perhaps the greatest improvement is the Waqf guards are no longer permitted near the Jewish visitors. They used to be right next to us and accompany us the entire time. Now, they are only permitted to stay at specific points” Fried explained.

He added that: “Practically, Jews pray on the Temple Mount all the time, precisely as the law mandates. As long as we don’t make a scene or intentionally try to instigate trouble, it is entirely permitted. The Israeli police are amazing and deserve a huge amount of credit for ensuring our civil rights.”

“This is all part of a long and gradual process but we have certainly moving forward. It is clear that the police realize that we are talking about prayer. It would be strange to label prayer as a provocation or an act of violence. That should also be true of Jews performing any Biblical commandment that serves God. For now, Jews are not permitted to perform the Biblical commandment of prostrating themselves before God but this may change in the near future” he concluded.