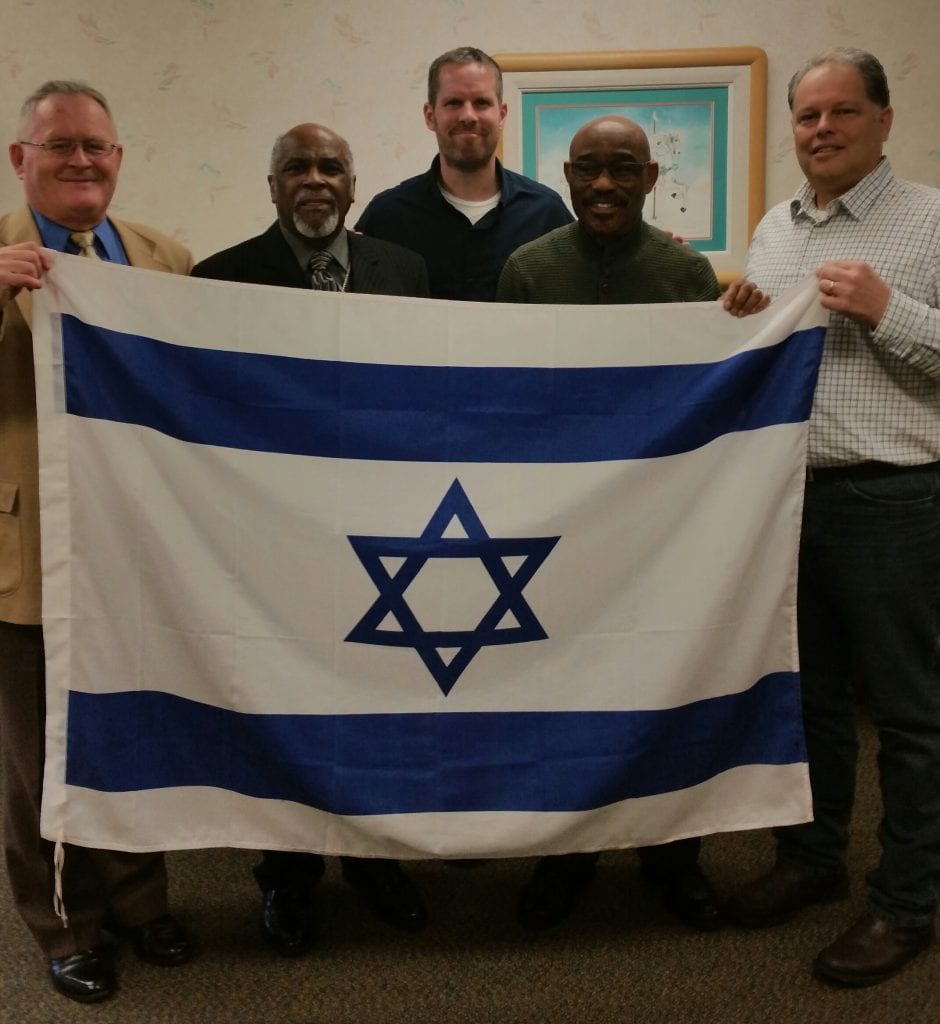 A group of over 100 clergymen from North-Central Ohio who came together in a powerful expression of solidarity with Israel, received blessings in the manner described in the Bible promising that those who bless the descendants of Abraham, Isaac and Jacob will be blessed in return.

The clergy, led by Benjamin Mutti and Reverend El Akuchie who are both coordinators of the Richland Community Prayer Network, stood with Israel when they sent a letter of solidarity to Prime Minister Benjamin Netanyahu in January 2017.

In the letter, the clergyman apologized for the some of the actions of former President Barack Obama, particularly when he ordered his UN ambassador, Samantha Power to abstain instead of veto Security Council Resolution 2334. The resolution, which passed unanimously, declared Israel’s presence in “east Jerusalem,” Judea, and Samaria to be illegal.

“These actions of the Obama Administration do not represent the will of the governed,” the letter stated. “Furthermore, this Administration has now been deposed. Most assuredly, we believe that the GOD of Abraham, Isaac, and Jacob gave all the land of Canaan to Israel as an everlasting covenant with Jerusalem as its eternal undivided capital.”

“Please be reminded Prime Minister Netanyahu, even though nations conspire against Israel, these people plot in vain. Even though the kings of the earth band together against you and your country, the One enthroned in the heavens laughs.”

Perhaps the most significant part of the letter was its conclusion in which the Ohio pastors bonded their fate with that of Israel, despite the geographic distance from the Jewish state.

“Since our destinies are intertwined together, you will always have friends in Ohio,” the letter said. “What affects your country affects our country. Beyond a shadow of a doubt, your GOD and His people are fighting and praying for you.”

The letter, signed by 103 Christian clergies from North-Central Ohio, was also sent to Rabbi Yehudah Glick, a long-time Temple Mount activist and Member of Knesset (MK) from Netanyahu’s Likud party. The clergymen were yearning to make up for the “crime” of the UN Security Council resolution.

“We believe the Jews should be a light unto the nations,” Benjamin Mutti told Breaking Israel News. “The UN resolution was a national crime. We wanted to bring reconciliation between our people and the Jews and also between us and the God of Israel.”

According to Mutti, that act of reconciliation starting bearing fruit right away.

“After sending the letter, we immediately began seeing signs of God’s favor. The economy rebounded and the ecology also responded almost immediately after we sent the letter.”

One of the ways the economy bounced back was the approval of a hotly contested the Rover Pipeline, a 713-mile natural $4 billion gas pipeline. Although the project would bring jobs and money to the region as well as facilitate the distribution of natural gas throughout the US and Canada, the pipeline was mired in several lawsuits. Its approval came ten days after the clergy sent the letter to Netanyahu. At the time, North-Central Ohio had a stagnant regional economy that was reported as the fifth worst in the country, and Mutti said that the project brought an enormous boost to the region.

“The pipeline company pays the landowners,” Mutti explained. “The employees who put in the pipeline also brought income to the region, and several local companies participated in the project.”

For many people in Ohio who live in rural communities, the land plays a powerful role in their lives.

“We follow the land,” Mutti said. “We watch nature for answers.” And the answers immediately came.

“According to Department of Agriculture numbers, the spring turkey harvest in Richland County saw a dramatic twenty-four percent increase from last year, whitetail deer harvested was the best in four years, and the cow herd in Richland County, which is estimated in late winter, is now at its largest number in over thirty years, which is amazing!” Mutti said.

Even with all that, the divine gratitude was not complete. In mid-March of 2017, winter storm Stella was poised to hit their region hard. At the last moment, however, the storm changed direction and dumped 30 inches of snow 70 miles away. The region that had participated in the pro-Israel initiative received just two inches.

The clergymen decided to take their blessing of Israel even further. In response to the Boycott Divestment Sanctions (BDS) movement that calls for a boycott on Israeli products, 42 Christian clergies petitioned the Richland County treasurer, Bart Hamilton, in May 2017 and requested that he invest community funds in Israel bonds. The standing county policy did not permit such international investments, but at the urging of the clergy, the treasurer looked into the possibility of doing so. They cited the strong performance of these bonds as an economic incentive.

After consulting with the treasurer, the county’s prosecutor rewrote the investment guidelines for the county, which had stood for 25 years. The treasurer then announced at a public county commissioner board meeting his intention to invest between $100,000 to $200,000 in Israel bonds. That very day, the county appeared to reap a Divinely-sponsored return on the investment.

“The day the County Treasurer announced that the county government would invest in Israeli bonds, was the same meeting that half a million dollars in unexpected revenue were reportedly discovered to alleviate a budget shortfall!” Mutti shared.

It is clear, at least to Mutti and the clergy of North Central Ohio, that blessing the Children of Abraham, Isaac, and Jacob has its advantages.

“There is something about Ohio, but we here feel a close brotherhood to Israel,” Mutti said. “Maybe it is our closeness to nature that allows us to see God’s presence clearly.”