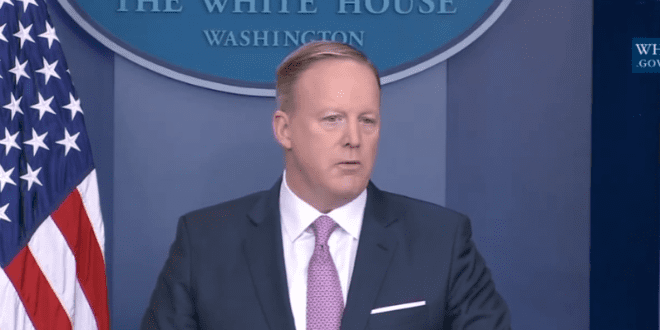 Stopping just short of echoing anti-Israel rhetoric heard from the previous administration just a few weeks ago, White House Press Secretary Sean Spicer said at a press conference on Thursday that expanding Jewish communities in Judea and Samaria “may not be helpful in achieving” the new president’s plan for peace between the Israelis and the Palestinian Authority.

“As the president has expressed many times, he hopes to achieve peace throughout the Middle East region,” Spicer said in a statement. “The Trump administration has not taken an official position on settlement activity and looks forward to continuing discussions, including with Prime Minister [Benjamin] Netanyahu when he visits with President Trump later this month.”

President Trump and Prime Minister Netanyahu are scheduled to meet in the White House February 15.

This statement comes in the wake of the destruction of the religious Jewish community of Amona in the region of Israel Biblically ceded to the tribe of Benjamin as an inheritance. Six weeks ago,  Israeli Prime Minister Benjamin Netanyahu promised to build a new community as part of a compensation plan to the displaced families. This will be the first new community built in Judea and Samaria in 25 years.

Israelis anticipate that President Trump will be more supportive of the Jewish communities in their ancestral homeland. In December, before Trump entered office, the United Nations Security Council passed a resolution declaring the Jewish “settlements to be illegal. In his final hours in office, former President Barrack Obama reversed a 35 year US policy by ordering his ambassador to the UN to abstain, withholding the American veto, thereby allowing the resolution to pass. In reaction, Trump promised “things will be different”.

As to the U.N., things will be different after Jan. 20th.

Israeli Ambassador to the UN, Danny Danon, downplayed the apparent change in policy. In an interview on Friday morning on Israel Radio, Danon explained the White House statement in a moderate light.

“I wouldn’t call it a U-turn, the statement is very clear. The meaning is: Wait until the meeting with Prime Minister [Benjamin] Netanyahu, who arrives in Washington in less than two weeks for a meeting with President [Donald] Trump and then set policy,” Danon said.