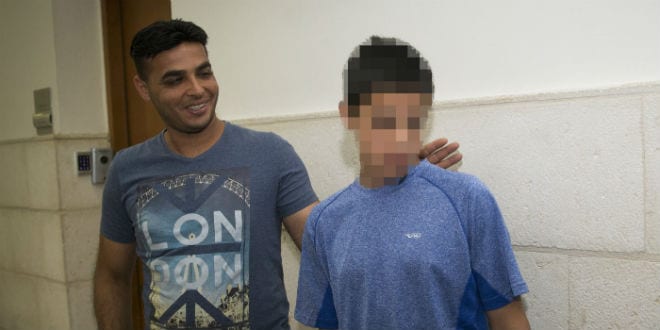 A 14-year-old terrorist was convicted by the Jerusalem District Court on Tuesday on two counts of attempted murder after he and his cousin viciously stabbed two Israelis in the Pisgat Ze’ev neighborhood of Jerusalem in October.

According to the indictment, the teenage assailant, who was 13 at the time of the attack, and his 15-year-old cousin carried out the stabbing with the intention to die as martyrs in the act of killing Jews, The Jerusalem Post reported.

The cousins first attacked a 13-year-old Jewish boy who was riding his bicycle as he exited a candy store. They proceeded to brutally stabbed him nearly a dozen times in the neck, leaving him in critical condition, before giving up and looking for another victim.

Their second victim was a 25-year-old Jewish man. CCTV footage released by the Israeli Police showed that the two chased down the terrified Israeli, ultimately stabbing him as well. The older of the two assailants was then shot dead by the police, while his cousin tried to run away. An Israeli civilian in the area hit the determined escapee with his car, injuring him in the legs.

Since the attack, the two Jewish victims and the Palestinian assailant have recovered from their wounds.

The terrorist’s lawyer, Lea Tsemel, said she would appeal the conviction, adding that the minor, himself, did not actually stab anyone, and had only wanted to scare the Jews. Tsemel also accused the court of using the tense atmosphere in Israel amid the ongoing terror wave as a reason to convict him of the more serious charge.

The teenager insisted that he had not taken part in the stabbing, and that he had even tried to beg his cousin not to stab anyone. “I didn’t want to go through with [the stabbing] even though at first we left the house with the intention of stabbing Jews. This was after my cousin persuaded me to come with him. I was just afraid,” he said in court.

But footage, as well as initial statements made to the authorities soon after his arrest, dispute the minor’s claim. Immediately following the attack, he said that he and his cousin wanted to stab Jews in response to Palestinian calls to protect the Temple Mount against a perceived change in the status quo, a source of contention despite Israeli assurances that they have no intention to do so.

The court said it believed his initial admissions, rather than his most recent statements, The Jerusalem Post reported.

The majority of the perpetrators in the ongoing current terror wave, dubbed the “knife intifada”, are Palestinian teenagers who have been incited to violence. Israeli PM Benjamin Netanyahu has warned against the incitement, saying that unless Palestinian leaders change tactics, peace in the region is simply not in sight.