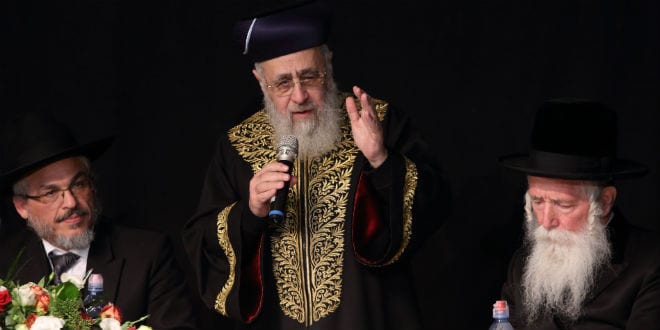 In a Sabbath sermon on Saturday, Sephardi Chief Rabbi Yitzchak Yosef said that Israelis should not fear punishment in civil courts or heed the warnings of IDF generals, but obey Jewish law and kill terrorists outright in instances of knife attacks or other assault.

“If a terrorist shows up with a knife, it is commanded [by Jewish law] to kill him,” Rabbi Yosef announced at the Yazadim Synagogue in Jerusalem during Saturday morning prayers, reported Kikar Hashabbat, an Ultra-Orthodox news site.

He cited an ancient rabbinic teaching which commands, “He who comes to kill you, arise to kill him [first].”

“You shouldn’t be afraid,” said Rabbi Yosef, adding that considerations of how judges would rule or what military officials would permit in such cases should not come into play.

“Don’t start worrying that someone will take you to the High Court of Justice, or that some [IDF] chief of staff will say otherwise,” he said, referring to comments made by IDF chief Lt. Gen. Gadi Eisenkot, who dismissed the Jewish teaching last month when he cautioned soldiers not to respond with “unnecessary force” to terror attacks.

“The IDF doesn’t need to get swept up in clichéd statements like ‘Kill or be killed’ or ‘Whoever comes at you with scissors needs to be killed’,” said Eisenkot at the time.

The chief rabbi added in his sermon that in addition to neutralizing an immediate threat, killing terrorists would deter future attacks.

“As soon as the terrorist knows that [if] he comes at you with a knife he doesn’t return from that alive, it will deter them. Therefore it is a mitzvah [Biblical commandment] to kill him,” he said.

However, he said, one should not kill a terrorist if he or she were disarmed or no longer posed a threat. Rather, he said, the terrorist should be given a life sentence until a more appropriate Biblical punishment would be permitted in the times of the redemption, when the Messiah “tells us who is Amalek, and only then we can kill them.”

Rabbi Yosef’s injunction to kill terrorists joins that of Tzfat Chief Rabbi Shmuel Eliyahu, who ruled at the beginning of the current wave of terror in October that it is “prohibited to leave an attacker alive after an attack”, and Knesset member Bezalel Smotrich, who argued in parliament that killing terrorists who go out to kill Jews is the “ABCs of morality”.