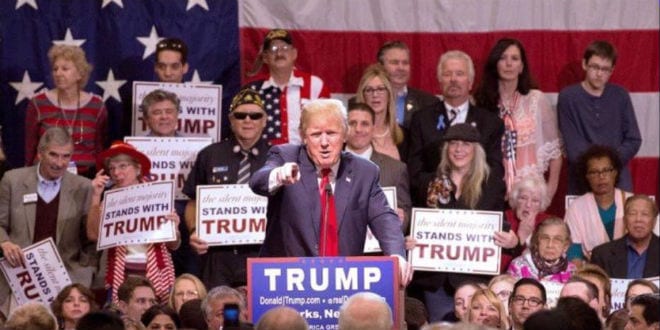 Donald Trump swept Tuesday’s Republican primary in Nevada, taking a whopping 45.4 percent of the vote in his third straight primary win and solidifying his significant lead in the race for the GOP presidential nomination.

Rivals Marco Rubio and Ted Cruz came in far behind, with Rubio scoring 23.3 percent of the vote and Cruz following closely in third place with 22.3 percent.

Trump, who also won the New Hampshire and South Carolina primaries, thanked his supporters profusely in his victory speech, saying that his campaign, which many had expected to falter, was now “winning, winning, winning the country.”

The first group of voters that he recognized in his speech were evangelical Christians. “It looks like we won by a lot of evangelicals,” he said. “I love evangelicals, and I have to tell you Pastor [Robert] Jeffress has been so incredible on television and elsewhere. He has been great.”

He mentioned another well-known evangelical supporter, Liberty University’s Jerry Falwell Jr., who Trump said was “an unbelievable guy and he has been with us and with us from the beginning.”

“It’s been amazing, the relationship,” he added. “So we won the evangelicals.”

He also mentioned a demographic whose support was surprising to many, considering Trump’s immigration policies: Hispanics. Trump has been outspoken against illegal immigration from Mexico, making a large wall on the border part of his platform.

“46 percent were the Hispanics—46 percent, number one with Hispanics. I’m really happy about that,” he said, though he went on to add, “We’re going to build the wall. And I have a lot of respect from Mexico and you just heard we won Hispanics. But let me tell you Mexico is going to pay for the wall, right?”

He said that he planned to keep the Guantanamo Bay detention center, or Gitmo, as it is known, open, and pledged to “load it up with bad dudes.”

The straight-talking Trump has raised concerns among Jews and Israelis in recent weeks by saying at a town hall meeting on February 17 that he planned to remain “neutral” on the Israeli-Palestinian conflict, rather than declaring his support for Israel or attributing blame to either party for the lack of a resolution.

Rival Ted Cruz slammed Trump’s neutrality, stating unequivocally that the matter is a clear case of right and wrong. “America will stand unapologetically with the nation of Israel – if I am president – because I am not neutral between terrorists who are blowing up and murdering women and children, and the people of Israel who are trying to defend their nation,” Cruz told Fox News.