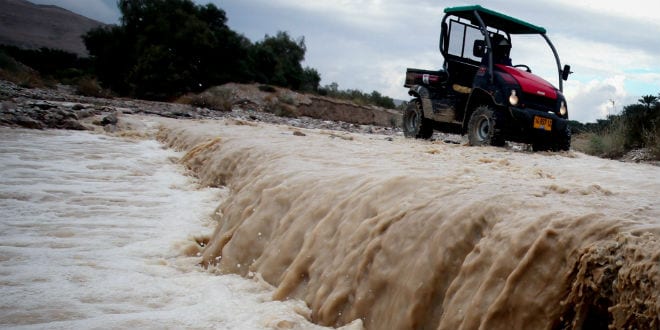 Following a week of unusually mild weather, winter returned to Israel this weekend as a large rainstorm struck from the north to the south, causing floods in the desert and dropping snow on the mountains in yet another round of apocalyptic weather in the Middle East.

The storm made itself felt in every part of the country. In the north, Mount Hermon was closed to visitors and skiers due to heavy snowfall, fierce winds, and heavy fog. The Sea of Galilee, which is at a near-constant risk of depletion, fortuitously rose by 1.5 centimeters, said the Water Authority.

In the southern Negev region, heavy rain has caused dangerous flash floods, washing out roads and stranding those unlucky enough to be caught in the storm. Ten hikers were rescued near the Ramon Crater by the volunteer Har Hanegev search and rescue unit.

The Ein Gedi area, near the Dead Sea, was particularly hard hit, with several schools closed on Monday following flash floods. Another rescue team was called in to extract a number of cars which had become stuck in the nearby Arugot Stream.

Highway 90 in the south was closed to traffic in both directions between Ein Gedi and Ein Bokek due to flooding, and motorists throughout the south were cautioned to drive carefully. The southern city of Sderot was also inundated with rainwater, causing floods in the municipality.

Both the Sea of Galilee in the north, known as the Kinneret in Hebrew, and the Dead Sea, or Salt Sea as it is referred to in the Hebrew Bible, are mentioned as marking the eastern borders of Biblical Israel. The Sea of Galilee also features heavily in the Christian Bible, as Jesus is purported to have walked on its waters.

Today, the water level of the Sea of Galilee fluctuates year to year, raising environmental concerns in Israel, but due to heavy rainfall in recent years, the lake has generally been rising. Including this storm’s 1.5 centimeter increase, only 3.85 more meters remain before the Sea of Galilee will be considered “full”.