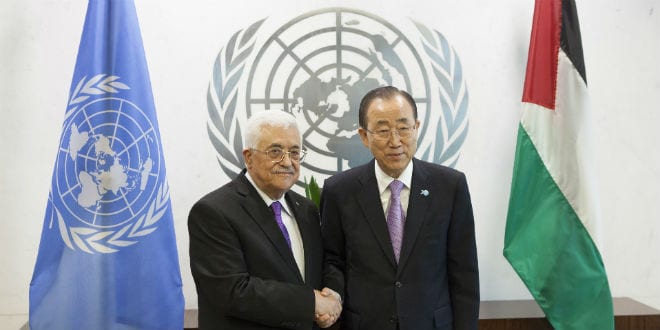 Israeli Prime Minister Benjamin Netanyahu said UN Secretary-General Ban Ki Moon was “encouraging terror” in response to harsh remarks made by Ban that “it is human nature to react to occupation.” Ban made the statement one day after Palestinian terrorists murdered a 24-year-old Israeli woman in a stabbing attack in Beit Horon near Jerusalem.

Ban Ki Moon spoke about the current situation in the Middle East at the UN Security Council on the evening of Wednesday, January 26. He said that the year 2016 has started with “unacceptable levels of violence” in the Middle East and placed the blame primarily on Israel.

“Palestinian frustration is growing under the weight of a half century of occupation and the paralysis of the peace process,” said Ban in his speech. “As oppressed peoples have demonstrated throughout the ages, it is human nature to react to occupation, which often serves as a potent incubator of hate and extremism.”

In his response, Prime Minister Netanyahu accused Ban of encouraging Palestinian terrorism. “There is no justification for terrorism,” he said. “The Palestinian murderers do not want to establish a state; they want to destroy a state and they say it out loud. They want to murder Jews, whoever and wherever they are, and they say it publicly. They are not murdering for peace or for human rights.”

During his speech, Ban Ki Moon also criticized the Jewish communities in Judea and Samaria. “Continued settlement activities are an affront to the Palestinian people and to the international community,” he said. “They rightly raise fundamental questions about Israel’s commitment to a two-state solution.”

In his response, Israeli Ambassador to the UN Danny Danon showed proof of Palestinian incitement, displaying one of the 4,000 rock-thrower dolls discovered by Israel in December in the Palestinian territories. He said the “terror dolls” were being used to teach hatred to Palestinian children.