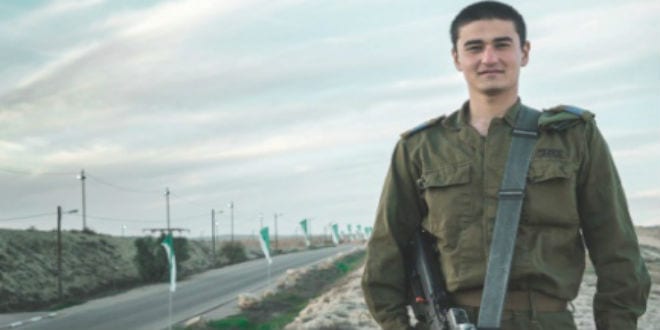 Daniel Tomohiro is not the typical Israeli soldier. His Hungarian grandparents survived the Holocaust, made aliyah, and fought in Israel’s War of Independence, but they then moved to Australia, where his mother met and married a Japanese man and moved to Iwata, Japan.

Now Tomohiro has come full circle and is serving in the Israel Defense Forces, undergoing basic training with the Nahal Brigade’s 50th Battalion. On Wednesday, his unit was scheduled to take part in a swearing-in ceremony at the Western Wall Plaza in Jerusalem.

“My 88-year-old grandfather Ivan lives in Sydney, Australia,” Tomohiro said. “He told me that he fought in an artillery during the War of Independence, in the Palmach [the Jewish paramilitary organization in the pre-state years], and was an instructor in an officer training course. My grandmother died when I was a child and I still don’t know what she did in the Palmach.”

Tomohiro’s parents met when his father was on a business trip to Australia.

“My parents married and moved to Japan, but at home they kept talking about Israel,” Tomohiro said. “My family is very pro-Israel and loves the state, and I believe the Israel Defense Forces is the most moral military in the world.”

According to Tomohiro, his grandparents imbued him with a sense of curiosity about Israel.

“I felt very connected to the state, but I arrived here for the first time only when I was 18, with my parents and younger brother,” he said. “My older brother had already made aliyah and was in the IDF Spokesperson’s Unit. After I graduated high school in Japan, I returned to Israel, and four months ago I joined an IDF Hebrew course and later started basic training.”

IDF service “means a lot to me and my family,” Tomohiro said.

“My grandmother was in Auschwitz. She survived only because a German nurse covered her with a blanket when Dr. Josef Mengele came to visit. He thought she was dead and this saved her life, because he didn’t perform experiments on her. I realized, after hearing such stories, that the Holocaust happened because there was no State of Israel. I am happy to contribute to the security of the state, to make the IDF and Israel strong, and to prevent another Holocaust,” he said.