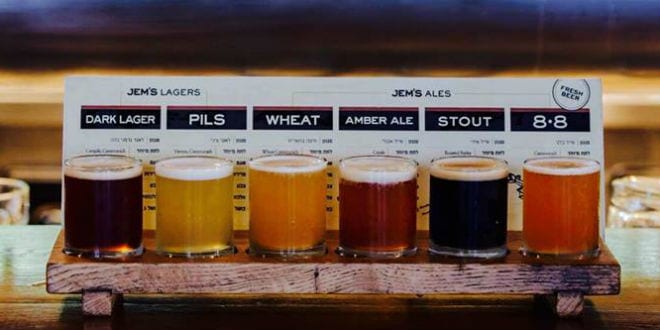 With 53 microbreweries established in the past decade, the fast-growing trend of boutique breweries creating small batches of craft beers is currently exploding on the Israeli scene. Israeli craft beer enthusiasts have entered into a “golden age” in which experimentation, innovation and quality have come together to create some of the region’s most sought-after brews.

Doug Greener, author of the comprehensive beer blog Israel Brews and Views, shared a bit about his knowledge of Israeli microbreweries with Breaking Israel News. He explained that the sudden eruption of craft breweries in Israel is due to many factors, but above all, it results from the desire to experiment and create beers that can rival the award-winning wines for which the country has become famous in the last thirty years.

“People got tired of drinking beer that was undistinguished. In a country where classy wine and classy restaurants have become the norm, and are winning awards, it was very difficult for people to ignore beer. So craft beer started up and started becoming classy,” explained Greener.

Evyatar Cohen, Owner of Kos Shel Bracha, a high-quality wine and beer store in Jerusalem, shared his thoughts with Breaking Israel News about the budding industry.

“People are trying new things all the time,” Cohen said. “Whether it is your general IPA’s (India Pale Ales) or stout beers or other experimental stuff, new things are being tried all the time and that keeps it interesting.”

“Unlike in wine, there are no rules,” Cohen continued. “People experiment. The more people experiment, the more new things can come out.” Greener echoed this sentiment and said that not only is the quantity of microbreweries that have opened in the past decade astounding, but the quality is completely disproportionate to a country that had such a small beer market before.

“Proportionally, Israel consumes a lot less beer per capita than the United States, and definitely a lot less than the Czech Republic or Germany. The fact that we have so many high-quality craft beer producers in such a small space, is really something special,” Greener said. “The Israeli beer market is fascinating, growing and developing but still very much in transition and development.”

In the last decade since Israel’s first microbrewery, Dancing Camel, opened in Tel Aviv, 53 microbreweries have opened around the country. Most are thriving. Everything from date and pomegranate beer to gluten-free hummus beer is offered on the microbrew market, and Israelis are lapping it up. Many of these breweries house restaurants which serve their own beer as well as those of other local breweries. Jem’s Beer Factory in Petach Tiqwa is a bar-and-restaurant which also offers tours of its brewery. Patrons order food, drink beer and watch as future batches are made before their eyes.

Another unique aspect of the industry is that brewers are experimenting with local ingredients in an attempt to capture the tastebuds of local enthusiasts. In its most recent attempt to create a beer that would speak to their clientele, Dancing Camel brewery created an etrog (citron) beer for the holiday of Sukkot. Lone Tree Brewery, a brewery in the Gush Etzion area, markets a date pomegranate beer each year around the holiday season to coincide with the fruits that are harvested and eaten around that time.

Meadan Craft Brewing, a northern brewery from the Galilean city of Carmiel, went a bit further away from tradition and created a line of gluten-free beer out of hummus (made from chickpeas) and another out of buckwheat. Cohen recommended the Meadan beer after tasting it at the recent Tel Aviv Beer Festival. “The Meadan beers are really impressive, especially for beer made without gluten,” he said.

Many of the microbreweries make smaller batches of seasonal or monthly beers and test their popularity with trial runs, eventually producing the best-selling brews year-round. Examples of this experimentation process are the ever popular chili beer from the Hadubim brewery called “Aish” (Hebrew for fire), as well as a pumpkin beer that is made by the Galil Brewery.

In all, Israel boasts 23 boutique breweries which bottle over 5,000 liters of beer per year. These breweries sell their beers to local stores and restaurants, and some sell their beers throughout the country. Others even make it to the international market and are available in the United States.

Israeli brews have won awards at international beer competitions, beating out some of the most notable beers from Europe.

But not all of the craft beers are aiming for the international stage. Many are aiming to stay local. “The main thing that prevents smaller breweries from marketing their beers to outlying areas is logistics, and the relatively small batches that they brew. Often smaller breweries do not produce enough beer to enable stores and restaurants to be able to carry their products as there is simply not enough to go around,” said Greener.

“People are really interested and are buying a lot of beers. It’s become quite a trend, some people like the classics, but others like to try new things and give feedback. And then they get to work with the brewers as it is such a small industry and they are still trying so they accept feedback and work with their customers,” said Cohen. “The craft beers [are] what people want.”

Greener signed off with a message to beer enthusiasts around the world. “If a person really wants to help Israel, then they need to purchase Israeli beer. It helps the industry here, and that helps people here,” he said. With the sheer amount of quality beer now coming out of Israel, purchasing Israeli beer, both in Israel and abroad, is no longer just a pro-Israel purchase. It is now also a quality purchase which reflects a true taste and appreciation for beer.