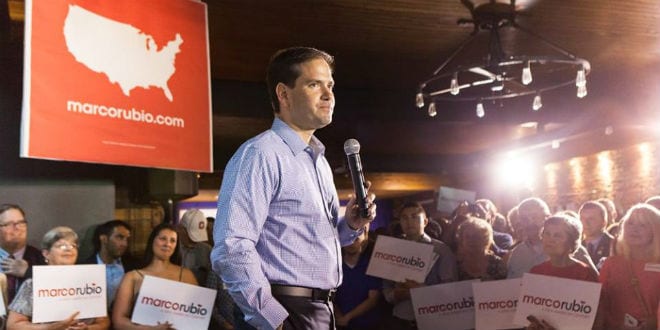 Republican Presidential candidate Marco Rubio delivered a speech Friday, timed to coincide with the reopening of the US embassy in Havana, lambasting US President Barack Obama’s concessions to Cuba, along with those made to Iran. He called the president’s foreign policy “flawed” and vowed to roll back agreements with both countries if elected.

Speaking in New York at conservative-leaning think tank the Foreign Policy Initiative, Rubio, himself the son of Cuban immigrants, chose to focus “on these two dangerous developments with Iran and Cuba, as I believe they represent the convergence of nearly every flawed strategic, moral, and economic notion that has driven President Obama’s foreign policy, and as such are emblematic of so many of the crises he has worsened around the world.”

A senator from Florida, Rubio is a member of the Senate Foreign Relations Committee. In his speech, Rubio accused Obama of being “quick to deal with the oppressors, but slow to deal with the oppressed.” He noted not one dissident had been invited to attend the embassy opening in Havana, making it little more than a “propaganda rally for the Castro regime”.

While Obama argues 50 years of severed ties with Cuba have failed to shake the hold of the Communist regime there and it is time to try something new, Rubio remains unconvinced. He told his audience the repression of rights and freedoms in Cuba has only increased since Obama unilaterally altered a policy upheld by US presidents of both parties for five decades.

If elected president, Rubio vowed, “I will give the Castros a choice: either continue repressing your people and lose the diplomatic relations and benefits provided by President Obama, or carry out meaningful political and human rights reforms and receive increased US trade, investment, and support.”

Rubio has similar plans for the nuclear deal brokered by the P5+1 powers with Iran. “I will undertake a three-part plan to roll back President Obama’s deal with Iran and repair the damage done to America’s standing in the Middle East,” Rubio said.

“I will give the mullahs a choice: either you have an economy or you have a nuclear program, but you cannot have both.” Further negotiations would be tied to “Iran’s broader conduct, from human rights abuses to support for terrorism and threats against Israel.”

“There would be no room for equivocation, no room for manipulation and no room for cheating,” Rubio says. “Some will say there will also be no room for negotiations. But history proves otherwise. Iran may not return to the table immediately, but it will return when its national interests require it to do so.”

US lawmakers are set to vote on the Iran nuclear accord in about a month. It is universally opposed by Republicans, and Obama is working to garner enough support among Democrats to prevent Congress from overriding his presidential veto and stopping the deal.