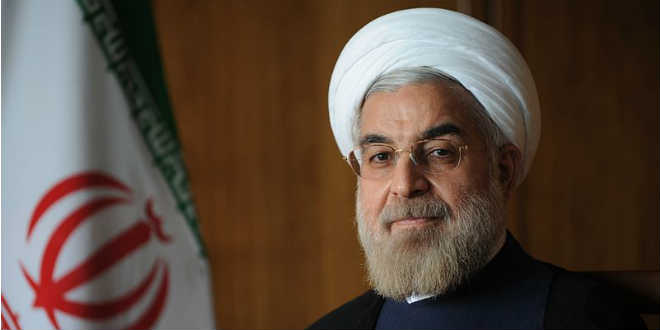 Speak unto the children of Israel, saying: In the seventh month, in the first day of the month, shall be a solemn rest unto you, a memorial proclaimed with the blast of horns, a holy convocation. (Leviticus 23:24)

Israeli Prime Minister Benjamin Netanyahu cautioned the international community on Saturday night, not to be deceived by Iran’s apparent well-wishes for the Jewish New Year on Twitter, according to the Jerusalem Post.

In a wholly befuddling action, newly elected Iranian President Hassan Rouhani appeared to Tweet a Rosh Hashana greeting along with a picture of a Jew donning a skullcap and prayer shawl. “As the sun is about to set here in #Tehran I wish all Jews, especially Iranian Jews, a blessed Rosh Hashana,” the tweet said in English. The same account sent out an identical message in Farsi, the JPost reported.

Netanyahu made it clear that this odd activity from the genocidal Iranian regime was not to distract the international community from the radical Islamic nation’s unwavering pursuit of nuclear weapons. “I am not impressed by the blessings uttered by a regime that just last week threatened to destroy the state of Israel,” Netanyahu said.

The account also retweeted a message in English from Iran’s Foreign Minister Javad Zarif, who on Thursday simply wrote in English on his twitter, “Happy Rosh Hashana.”

“Thanks. The New Year would be even sweeter if you would end Iran’s Holocaust denial, sir. “@JZarif: Happy Rosh Hashana,” she wrote. Zarif sent a twitter message back to her, that said, “Iran never denied it. The man who was perceived to be denying it is now gone. Happy New Year,” in an alleged reference to previous president Mahmoud Ahmadinejad, a rabid Holocaust denier.

According to Iran’s Fars News Agency Rouhani did not sent out a Rosh Hashana greeting. His adviser Muhammad Reza Sadegh told the agency, “Mr. Rouhani does not have a twitter account.” He explained that the twitter pages with Rouhani’s name on it were opened by his supporters during the election.

“Of course, such activities are fully normal during election campaigns, and some of them might continue their operation even after the election,” Sadegh told Fars.

“Any official news on him [the president] is released by the presidential office,” Sadegh told Fars.

Netanyahu took the issue of holiday greetings from Tehran seriously enough to issue a response of his own. “The Iranian regime will be examined only in his actions and blessings that aim to divert attention from the fact that even after the elections, it continues to enrich uranium and to build a plutonium reactor with the aim of developing nuclear weapons that will threaten the state of Israel and the whole world,” Netanyahu said.

“The international community must not fall for illusions. It must demand actions from Iran, not words. It must step up pressure,” Netanyahu said.