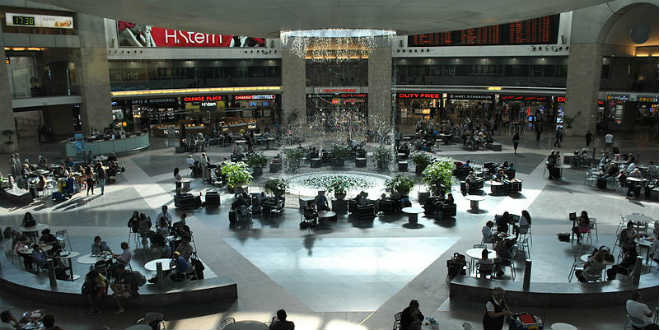 For there shall be a day, that the watchmen shall call upon the mount Ephraim: arise ye, and let us go up to Zion, unto the LORD our God.’ (Jeremiah 31:5)

Israel’s Ben Gurion International Airport prepared itself Sunday for another influx of visitors to the Holy Land with the upcoming Jewish holidays of Yom Kippur and Sukkot fast approaching, according to Haaretz. The initial surge began prior to the Rosh Hashana, or New Years, holiday which took place on Wednesday and Thursday of last week.

The entire holiday month, known in Hebrew as Tishri, expects to bring with it an estimated 1.5 million air travelers through the halls of the Tel Aviv based airport. According to the Israel Airports Authority, 67,300 passengers are set to use the airport on Sunday, on 416 international flights that are scheduled to depart or arrive during the course of the day. Much of the traffic involves Israelis on their way to holidays overseas. From the eve of Rosh Hashanah on Wednesday until yesterday, about 133,000 people departed or arrived through the airport on 876 international flights.

El Al added about 25,000 additional seats on overseas flights for the holidays, to destinations including New York, Bangkok, London, Paris, Rome, Milan, Athens and Kiev. In addition, about 100,000 foreign tourists are expected to arrive in Israel on El Al alone during the month – half of whom are flying here from Western Europe and another 25% from North America.

The first of about 20,000 Bratslav Hasidim who flew to Uman, Ukraine, for the traditional Rosh Hashanah visit to the grave of Rabbi Nachman of Bratslav are expected to be among the returning passengers today. Israir Airlines will be flying 4,000 passengers to and from Uman over the holiday season on its own aircraft or through airplanes leased through a Polish carrier. El Al is scheduled to fly a similar number of travelers to and from Ukraine.