“Erdogan’s claims that ‘There is no Islamic terror’ have left several Islamic terror organizations heart-broken. A press release from al-Qaeda’s press office read: ‘The prime minister’s remarks are very discouraging. We are doing our best!'” – Zaytung (satire website).

Turkey’s strongman, President Recep Tayyip Erdogan, may have exhibited all possible features of political Islam since he came to power fifteen years ago, but at least he has been bold and honest about his understanding of Islamism: There is no moderate Islam, he recently said again.

This comment does not mark any U-turn or a radical deviation from his earlier freshman-self back in the 2000s. The problem is that his Western “allies” have stubbornly preferred to turn a blind eye to his poster-child Islamism. Worse, they still do.

Several years ago, Erdogan’s ideological-self clearly stated that “Turkey is not a country where moderate Islam prevails.” In the same speech, his pragmatic-self — the one that wanted to look pretty to a chorus of Western praise — added that “We are Muslims who have found a middle road”. But which “middle road?”

In the several years that followed, Erdogan proudly exhibited another feature of Islamism in a make-believe assertion: Muslims never do wrong; if a Muslim does wrong then he is not Muslim.

In 2009, when Sudanese paramilitaries committed acts of genocide against the population of Darfur, and Sudan’s president, Omar al-Bashir, was guilty of the crimes for which he was indicted by the International Criminal Court, Erdogan simply said: “It is not possible for those who belong to the Muslim faith to carry out genocide.” Instead, he said, Israeli “war crimes” in Gaza are worse than anything that has taken place in Sudan. As he said that, victims in Sudan had already numbered in the hundreds of thousands.

In February, at a meeting in Ankara, Erdogan slammed German Chancellor Angela Merkel’s phrase “Islamist terror”. He angrily said to his guest, “Islam means ‘peace,’ it can’t come with ‘terror'”. 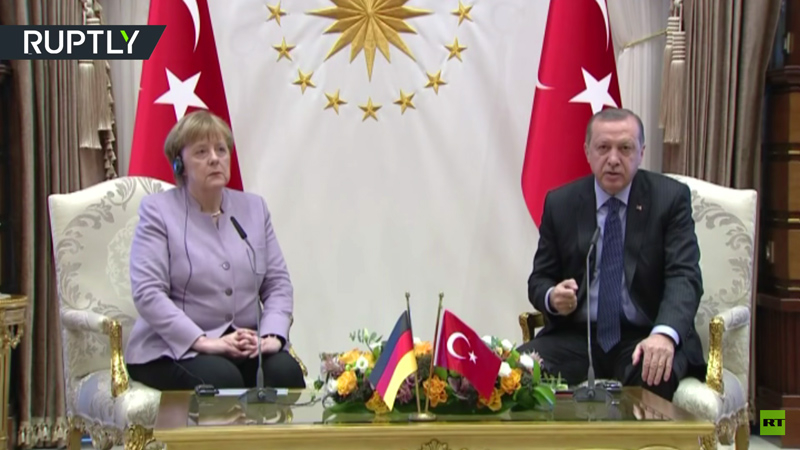 In a similar show of ideological wishful thinking, Erdogan has often come out in defense of the Egyptian Muslim Brotherhood, despite international pressure against the movement, particularly from the United States, which has debated listing the group as a terrorist organization. Erdogan said he did not consider the Brotherhood one because “it is not an armed group, but is in actual fact an ideological organization”.

In a 2010 interview with the Italian daily Corriere della Sera, Obama referred to Turkey as a “great Muslim democracy”. Obama should have seen that a democracy is a democracy — without any religious prefix. He would see in later years the difference between a democracy and a Muslim democracy.

But it took Obama many years to see that. In 2011, Tom Donilon, Obama’s former national security advisor, said that the U.S. president regarded Erdogan as “a man of principle, and also a man of action.” In a 2012 Time interview, Obama named Erdogan as one of the five world leaders with whom he had the strongest bonds.

Seven years after Obama’s pathetic diagnosis about the kind of democracy Erdogan brought to an otherwise secular country, the Turkish president said that “There is no moderate or immoderate Islam. There is only one Islam.” Worse, he claimed that the term “moderate Islam” had been fabricated by the West in order to weaken Islam. From the Muslim democracy to the former U.S. president, with love…

The U.S. ambassador to Ankara from 2003 to 2005, Eric Edelman, said, “We basically have turned a blind eye to Erdogan’s drive towards an authoritarian, one-man system of rule in Turkey”. The journalist Jeffrey Goldberg wrote in The Atlantic’s April 2016 issue:

“Early on, Obama saw Recep Tayyip Erdoğan, the president of Turkey, as the sort of moderate Muslim leader who would bridge the divide between East and West — but Obama now considers him a failure and an authoritarian…”