The policy positions of Schulz and Merkel on key issues are virtually identical: Both candidates are committed to strengthening the EU, maintaining open-door immigration policies, pursuing multiculturalism and quashing dissent from the so-called far right.

Regardless of who wins, Germany is unlikely to undergo many course corrections during the next four years.

Schulz has already called for tax increases on the wealthy and for fighting the AfD party. He has also threatened financial consequences for European countries that refuse to take in more migrants.

Martin Schulz, the former president of the European Parliament, has been chosen to challenge Chancellor Angela Merkel in Germany’s general election on September 24.

The policy positions of Schulz and Merkel on key issues are virtually identical: Both candidates are committed to strengthening the European Union, maintaining open-door immigration policies, pursuing multiculturalism and quashing dissent from the so-called far right. 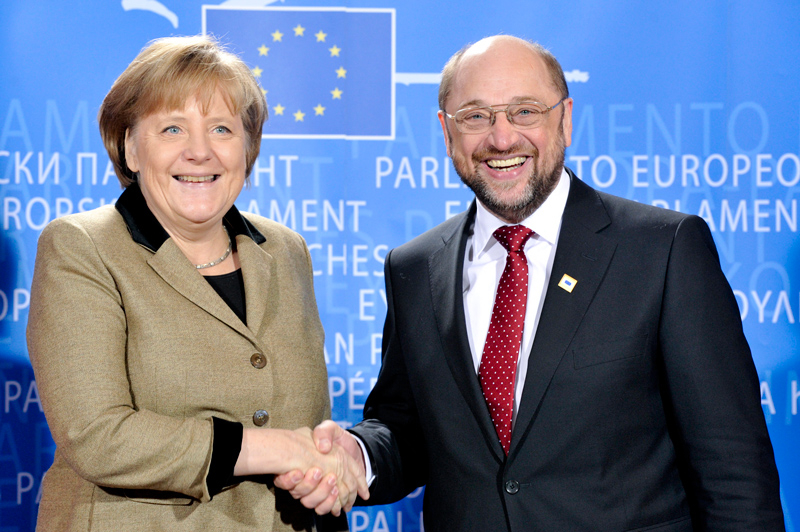 Polls show Merkel, who heads the center-right Christian Democratic Union (CDU), slightly ahead of Schulz, the new leader of the center-left Social Democratic Party (SPD). Regardless of who wins, Germany is unlikely to undergo many course corrections during the next four years.

Schulz, who became a Member of the European Parliament in 1994, and has spent most of his political career in Brussels, unofficially took over the reins of the SPD on January 29, 2017, after the unpopular Sigmar Gabriel said he was stepping down. The move will become official at a party congress on March 19. SPD leaders said that as an “outsider,” Schulz has a better chance of unseating Merkel, who has been in office since November 2005, and is running for a fourth term.

The SPD has been the junior partner in a Merkel-run “grand coalition” (Große Koalition) government since December 2013. SPD leaders say that if the party wins at least 30% of the national vote, Schulz will become the next chancellor.

In an interview with Der Spiegel, Schulz, 61, said he was the best candidate to replace Merkel, who is 62. “I have worked with Angela Merkel longer than almost anyone outside her party,” he said. “I have studied her, gotten to know her.” Schulz has eight months to persuade Germans to vote for him.

The latest INSA poll shows the CDU (together with its Bavarian sister party, the CSU) with 32.5% of the vote, the SPD with 26%, and the anti-establishment party Alternative for Germany (AfD) in third place with 13%.

If the CDU/CSU or the SPD fail to win a majority, they may join forces to form another grand coalition. Either party may also seek to form a coalition government with other smaller parties, particularly the Greens, but all have ruled out entering into a coalition with the eurosceptic AfD.

The AfD, which is set to enter the Parliament (Bundestag) for the first time, is uniquely placed to attract voters who are angry about Merkel’s decision to allow into Germany more than one million mostly Muslim migrants from Africa, Asia and the Middle East. The party, which polled as high as 15.5% in December 2016, has struggled to gain more traction due to internal power struggles and accusations of anti-Semitism.

Schulz — a high school dropout whom The Economist magazine described as “pugnacious” and “impulsive” — is campaigning on a platform to unite an increasingly divided German polity. “Germany needs a new start and that cannot happen with the CDU,” he said. “We have come to the end of what we can achieve with divided conservatives.”

The SPD will not unveil its election platform until a party congress in May. But Schulz has already called for tax increases on the wealthy and for fighting the AfD. He has also threatened financial consequences for European countries that refuse to take in more migrants.

When a television presenter confronted Schulz about his lack of governing experience, he compared himself to Barack Obama: “I share the fate with Barack Obama. He also had no government experience when he became President of the United States.”

Schulz has argued that the EU must be preserved at any cost:

“We are at a historical juncture: A growing number of people are declaring what has been achieved over the past decades in Europe to be wrong. They want to return to the nation-state. Sometimes there is even a blood and soil rhetoric that for me is starkly reminiscent of the interwar years of the past century, whose demons we are still all too familiar with. We brought these demons under control through European structures, but if we destroy those structures, the demons will return. We cannot allow this to happen.”

He has opposed the idea of holding national referendums on quitting the EU:

“Referendums have always posed a threat when it comes to EU policy, because EU policy is complicated. They’re an opportunity for those from all political camps who like to oversimplify things.”

Schulz has also said that the British decision to leave the European Union would facilitate the creation of a European Army:

“In the fields of security and defense policy, although the EU loses a key member state, paradoxically such a separation could give the necessary impulse for a closer integration of the remaining member states.”

Playing the anti-Americanism card, Schulz has expressed his disdain for U.S. President Donald J. Trump, calling him “an obviously irresponsible man sitting in a position that requires the utmost sense of responsibility.” He added: “Trump is not just a problem for the EU, but for the whole world.”

Schulz described Trump’s order to build a wall along the U.S. border with Mexico as “a taboo breach that is intolerable.” He also criticized Trump’s temporary travel ban for citizens of seven countries deemed to be terrorist safe havens:

“I’m sure when European politicians travel to Washington they will explain to the U.S. government that international law and human rights also apply for Donald Trump.”

Schulz has reserved his worst vitriol for the anti-immigration AfD, whose leaders he has described as “rat catchers” (Rattenfänger) who are “trying to profit from the plight of refugees.” He has also called them “shameful and repulsive.”

Merkel, who up until recently vowed to continue her open-door migration policy, has now promised to consider an annual cap on the number of migrants allowed into Germany. In a rare moment of contrition, she said: “If I could, I would turn back the time by many, many years. If I knew what change in policy people wanted, I would be ready to consider it and to talk about it.”

In an interview with Welt am Sonntag, Finance Minister Wolfgang Schaeuble admitted that the Merkel government made mistakes with its open-door migration policy. “We have tried to improve what got away from us in 2015,” he said. “We politicians are human; we also make mistakes. But one can at least learn from them.”

Some in the German media are skeptical about Schulz. Frankfurter Allgemeine Zeitung wrote:

“As a chancellor candidate, Schulz has announced an election campaign for social justice and the EU. He will not allow ‘bashing’ of the EU. Can Schulz score points? Like any other German politician, he stands for ‘Brussels’ as a cipher for a detached and bureaucratic European elite. The alienation between elites and large parts of the population is not only in America. In Germany as well, voters increasingly are turning away from established politics.”

By contrast, Der Spiegel published a sensational cover story entitled, “Saint Martin” which portrayed Schulz as a supernatural figure — similar to its adulation of Barack Obama eight years ago. The magazine added: “The chancellor’s office is worried.”