Palestinians: When Fatah Becomes the Problem

The upcoming conference coincides with mounting tensions in Fatah, the result of internal bickering and growing discontent with Abbas’s autocratic rule.

Since its founding 50-some-odd years ago, the secular Fatah faction and its leaders have brought nothing but disaster, not only to Palestinians, but to other Arabs as well.

The business of Fatah is relevant to the entire international community, including Israel. Why? Because Fatah dominates the PA, which is supposed to be Israel’s peace partner and which is funded and armed by the US, EU and other international donors.

Hamas will continue to exploit Fatah’s corruption in order to gain more popularity among the Palestinians. The truth, however, is that neither Hamas nor Fatah has fulfilled repeated promises to improve the living conditions of the people.

Abbas and his old-guard cronies will continue to clutch onto power and resist demands for real reforms. And they will continue to blame Israel, and everyone else, for the misery of their people, misery they themselves have wrought.

Barring last-minute changes, the Palestinian Fatah faction, which is headed by Palestinian Authority (PA) President Mahmoud Abbas, is scheduled to hold its Seventh Conference in Ramallah on November 29. This will be the first gathering of its kind since August 2009.

The upcoming conference coincides with mounting tensions in Fatah, the result of internal bickering and growing discontent with Abbas’s autocratic rule. Some 1,300 delegates to the conference will be asked to vote for two of Fatah’s key decision-making bodies — the 23-member Central Committee and the 132-member Revolutionary Council.

Palestinian political analysts predict that the Fatah conference will deepen divisions among the faction’s rival camps, particularly in the wake of Abbas’s continued efforts to eliminate his critics. Abbas, they say, decided to convene the parley in a bid to tighten his grip on Fatah and block the emergence of new leaders.

“The Seventh Conference should not be held under the current difficult and complicated circumstances that Fatah is undergoing,” said Hani Habib, a prominent political analyst in Ramallah. “Internal disputes in Fatah and Arab pressure on the Fatah leadership could even result in the postponement of the conference.”

According to Palestinian sources, a number of Arab countries, including Egypt, Jordan, Saudi Arabia and the United Arab Emirates have recently exerted pressure on Abbas to patch up his differences with ousted Fatah strongman Mohamed Dahlan. These counties, according to the sources, would like to see Dahlan, an arch-enemy of Abbas, as the next PA president.

“The Fatah leadership is under pressure from the Arab ‘quartet’ not to hold the conference before Abbas and Dahlan reach a reconciliation agreement and end their dispute,” said another political analyst, Raed Nueirat. Referring to the ongoing rivalry between Abbas and Dahlan, he added: “Holding the conference now could deepen the schism in Fatah and aggravate its internal crisis.”

Yet all indications are that Abbas is hoping to take advantage of the upcoming conference to rid himself once and for all of Dahlan and his other rivals in Fatah. Ahead of the conference, Abbas already expelled several Fatah members suspected of affiliations with Dahlan. The expulsions are meant to send a warning message to Abbas’s critics, silencing them at the Seventh Conference. For Abbas, the only good conference is one in which the only delegates present are his loyalists. In this regard, he seems to have endorsed the North Korea model of autocracy.

If all goes according to plan, Abbas is expected to emerge triumphant at the Seventh Conference. His political rivals, first and foremost Dahlan, who lives in the United Arab Emirates, will not be among the conference invitees. Most of Dahlan’s supporters in the West Bank and Gaza Strip will also be excluded from the gathering, as well as any Fatah member whose loyalty to Abbas is considered questionable. 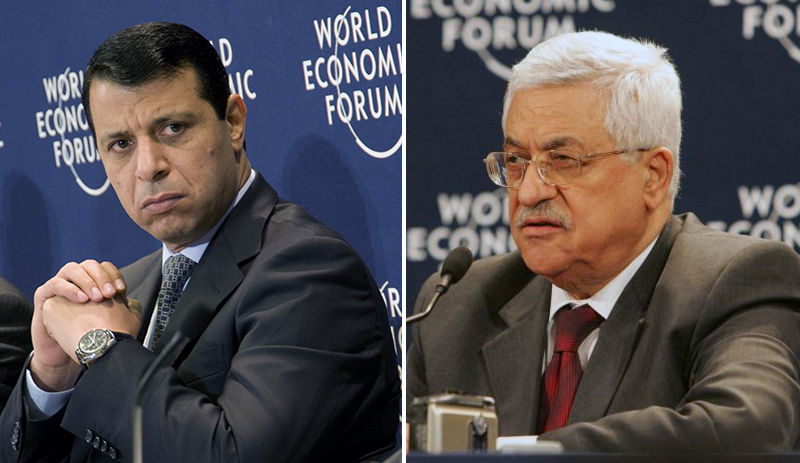 All indications are that Mahmoud Abbas (right) is hoping to take advantage of the upcoming Fatah conference to rid himself once and for all of Mohamed Dahlan (left) and his other rivals in Fatah. (Image source: World Economic Forum)

Fatah conferences are mainly intended to discuss internal reforms and pave the way for new faces to have a greater say in decision-making.

But ever since Fatah lost the parliamentary election in 2006 to Hamas, it has failed to embark on major reforms or present new and young leaders. The very Fatah officials who lost the election continue to run the same old, tired show. Internecine squabbling and financial and administrative corruption handed Hamas a victory in that election. More recently, the Palestinian local elections were called off amid fears that Fatah candidates could once again lose to Hamas.

Fatah’s failure to implement reforms and introduce new faces remains a driving force for Hamas’s popularity among Palestinians. Hamas is here to stay, until Palestinians are offered a better alternative — and Fatah is definitely not seen as such an alternative.

Since its founding 50-odd years ago, the secular Fatah faction and its leaders have brought nothing but disaster, not only to Palestinians, but to other Arabs as well.

Fatah played major roles in the civil wars that erupted in Jordan and Lebanon during the 70s and 80s, which resulted in the killing of tens of thousands of people. Before and after the signing of the Oslo Accords and the establishment of the Palestinian Authority in the early 90s, Fatah members participated in hundreds, if not thousands, of terror attacks against Israelis. Internecine fighting and massive corruption, as well as double-talk and conflicting messages to their people and the rest of the world, have always been the main hallmark of Fatah.

“Fatah is facing a severe crisis,” said political analyst Dr. Abdel Sattar Qasssem. “Neither Fatah nor the Palestinian Authority has the courage to tell the people the truth. No one knows what Abbas wants or how he is running the show. Every now and then Abbas expels some Fatah members and this has led to many splits. Abbas is working toward dismantling Fatah.”

Some Fatah officials and activists were hoping that the Seventh Conference would discuss the super-sensitive issue of Abbas’s succession or, at least, the appointment of a Deputy Palestinian Authority President. But these issues are considered taboo by the 81-year-old Abbas. He does not tolerate any talk about his future successor or sharing powers with someone else.

For years, Abbas has stubbornly turned down demands to appoint a deputy or prepare for the day after he is gone. Those who raised these issues, both in private and in public, were stripped of their powers or removed from their jobs. Abbas, his critics charge, manages Fatah as if it were his private fiefdom.

The business of Fatah is relevant to the entire international community, including Israel. Why? Because Fatah dominates the PA, which is supposed to be Israel’s peace partner and which is directly funded by the US, EU and other international donors.

Fatah is the faction with which Israel is supposed to make peace in the future. This is the faction that is supposed to control any future Palestinian state. A weak, corrupt and torn Fatah that has little credibility among its own supporters in particular and Palestinians in general is worth less than nothing for the betterment of Palestinians. Why less than nothing? Because Hamas will continue to exploit Fatah’s corruption in order to gain more popularity among the Palestinians.

Hamas continues to present itself to the Palestinians as the only party capable of improving their living conditions. The truth, however, is that neither Hamas nor Fatah has fulfilled repeated promises to improve the living conditions of the people.

In 2006, Hamas ran in the election under the banner of “Change and Reform.” The list’s electoral platform promised to “bring about justice and equality among the people, to protect public freedoms and put an end to administrative, financial and moral corruption.”

Needless to say, Hamas’s promises have never been fulfilled. On the contrary, the living conditions of the Palestinians living under Hamas’s rule in the Gaza Strip have since deteriorated on all levels. The only change Hamas has brought has been more suffering and misery for its people. Moreover, it is hard to point to any reforms implemented by the Hamas leadership ever since, nearly a decade ago, their movement seized control of the Gaza Strip.

Similarly, Fatah has never kept its promises to reform its corruption-riddled institutions. “President Abbas has hijacked the decision-making process of all institutions belonging to the Palestinian Authority, the PLO and Fatah,” charged Majed Abu Shamaleh, a senior Fatah official and critic of the PA president. “Abbas’s attempts to get rid of many Fatah members is a crime against Fatah and the Palestinian people. Abbas alone bears full responsibility for the continued crisis in Fatah and the Palestinian arena. Many of the current Palestinian Authority and Fatah leaders are acting out of personal interests.”

Abbas, by all accounts, appears to be determined to march in the opposite direction. This week, the PA’s “constitutional court” granted Abbas the power to strip Palestinian legislators of their parliamentary immunity. The decision paves the way for Abbas to expel his Fatah critics from the Palestinian Legislative Council. The decision drew strong condemnations from many Fatah officials.

“The court’s decision is the last nail in the coffin of Palestinian democracy,” said Fatah legislator Najat Abu Baker. “Stripping legislators of their parliamentary immunity without seeking the approval of the parliament means that we are killing democracy.” Abu Baker called on her Fatah colleagues to submit collective resignations from the faction and parliament in protest against the court decision.

Regardless of the results of the upcoming Seventh Conference, here is what we know: Fatah is far from taking any steps towards major reforms and transparency. Abbas and his old-guard cronies will continue to clutch onto power, and continue to resist demands for a changing of the guard and real reforms. And, of course, they will continue to blame Israel, and everyone else, for the misery of their people, misery they themselves have wrought. And this is the Fatah that members of the international community are funding and arming and continuing to bury their heads in the sand about, and pretending that all is fine.

It is time to realize that Fatah has become part of the problem and not part of any solution. That is, unless its leaders are willing to take brave and real measures to change — an upheaval that does not seem likely to happen.