Hamas: Vote for Us or Burn in Hell

Abbas decided to hold local and municipal elections because his advisors convinced him that Hamas would boycott the vote, according to senior Fatah official Husam Khader.

The first sign of Hamas’s frightening platform emerged when one of its top muftis, Yunis Al-Astal, issued a fatwa banning Palestinians from voting for any other party other than Hamas. “Any person, male or female, who votes for a party other than Hamas will be considered an infidel and apostate and his or her repentance will not be accepted even if they fasted or prayed or performed the hajj [pilgrimage] to Mecca,” the mufti ruled.

This Hamas tactic has worked in the past. In the previous parliamentary election, Hamas used the same propaganda to brainwash and scare Palestinian voters.

By calling the election and allowing Hamas to participate, Abbas is digging his own grave, and presiding over the burial of any so-called peace process with Israel.

It is election season in the West Bank and Gaza Strip. Palestinians are preparing to cast their votes in the local and municipal elections, scheduled to take place on October 8. The upcoming elections will be different from the last one, held in 2012 only in the West Bank, when Hamas boycotted the vote, allowing the rival Fatah faction to claim victory.

This time Hamas has decided to join the political fray — a move that caught Fatah and its leaders, including Palestinian Authority (PA) President Mahmoud Abbas, by surprise.

Hamas’s decision to participate in the local and municipal elections has further aggravated tensions with Abbas’s Fatah faction, which continues to suffer from deep internal divisions and rivalries.

In the past few weeks, Hamas and Fatah have been accusing each other of cracking down on each other’s supporters in the Gaza Strip and West Bank in a bid to affect the results of the election.

According to Hamas, the Palestinian Authority security forces have in recent weeks arrested scores of the Islamist movement’s supporters in the West Bank. Hamas claims that the crackdown intensified after its decision to participate in the election. Hamas also claims that some of its detained supporters have been tortured, prompting some of them to go on hunger strikes in Palestinian prisons.

Samira Halaykeh, a Hamas representative in the West Bank, said that the crackdown was an “extension” of the campaign of arrests that the PA has been waging against the Islamist movement for several years now. She predicted that the latest crackdown would actually serve as a boomerang, strengthening Hamas.

Another senior Hamas representative in the West Bank, Bassem Al-Za’areer, condemned the arrests of Hamas supporters by the Palestinian Authority as “politically-motivated.” He too alleged that the crackdown was aimed at undermining Hamas’s chances of winning the election. The crackdown, he added, reflects the “state of desperation and panic” of the PA following Hamas’s decision to participate in the vote. The Palestinian Authority fears a “fair and decent competition,” he explained.

The Palestinian Authority’s crackdown on Hamas on the eve of the election has even riled some senior Fatah officials, such as Husam Khader of the Balata refugee camp near Nablus, the largest Palestinian city in the West Bank.

“Political arrests solidify the dictatorship of the ruling [Fatah] party,” Khader charged. “The Palestinian Authority is searching for any excuse to call off the election because it fears democracy more than it fears Israel.” According to Khader, Abbas decided to hold the local and municipal elections because his advisors convinced him that Hamas would boycott the vote. The top Fatah official predicted that internecine fighting in Fatah would play into the hands of Hamas in the upcoming election. This is precisely what happened in the 2006 parliamentary elections, when divisions within Fatah facilitated Hamas’s victory. 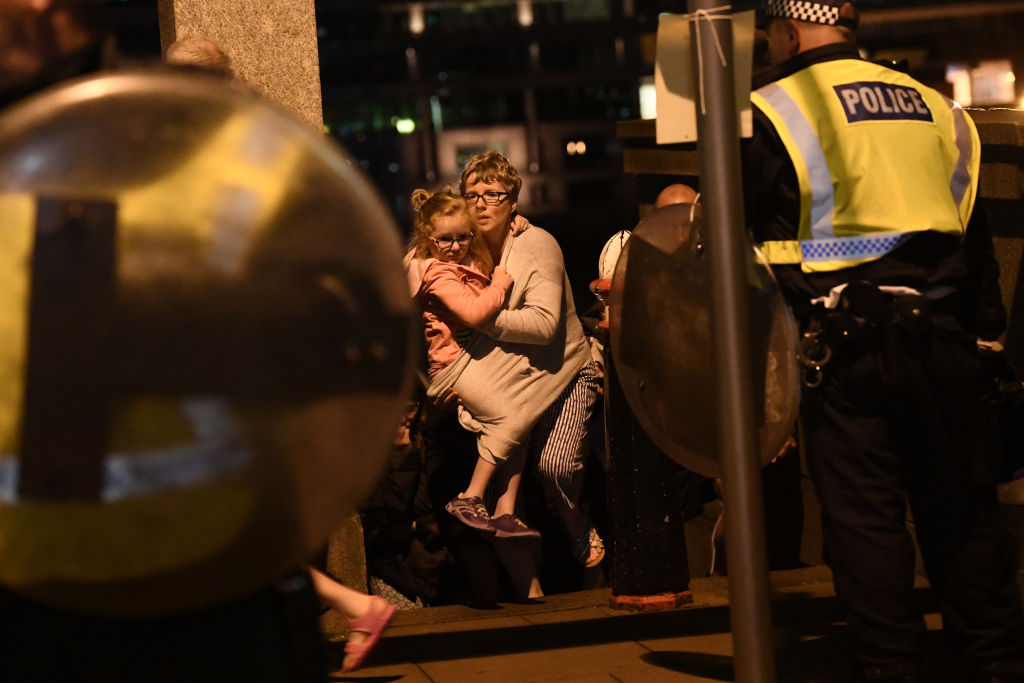 One man, one vote, one time? Hamas leader Ismail Haniyeh (left) and Fatah leader Mahmoud Abbas (also president of the Palestinian Authority) are pictured voting in the last election for the Palestinian Legislative Council, which took place in 2006.

Similarly, Fatah maintains that Hamas has been waging a campaign of intimidation and detention against Fatah supporters in the Gaza Strip — also in order to disrupt the upcoming election and undermine Fatah’s performance at the ballot boxes.

In the past two weeks, several Fatah activists in the Gaza Strip were rounded up by Hamas security forces, which have also banned Fatah from carrying out public election campaigns or holding rallies. Last week, as part of this crackdown, a Hamas court sentenced a former Palestinian Authority “general” to seven years in prison for “collaboration” with the PA security forces in the West Bank. Another three Fatah activists were sentenced to five years for the same crime.

In an effort to quell tensions between Hamas and Fatah, the Palestinian Central Election Commission decided to ask the two parties to sign a “Code of Conduct” document that requires all candidates and parties to avoid smear campaigns, slander, and fomenting sectarian or racist strife. The document also requires all those participating in the election to refrain from “exploiting religious or sectarian or tribal sentiments” in their campaign and also to avoid any form of intimidation, such as declaring one another traitors, apostates and infidels.

Although Fatah and Hamas have pledged to honor the terms of the “Code of Conduct,” known in Arabic as mithak sharaf, the two sides, which are not famous for honoring agreements, seem resolved to resort to all available methods to persuade voters to vote for each one of them.

For now, the two sides have taken to social media to present their electoral platforms and wage a smear campaign against each other.

Local elections are supposed to be about who can provide the people with the best municipal services and improve their living conditions. As such, one would expect candidates to run on a platform that promises new schools, roads, parks, sports centers and other municipal services. But in the case of the Palestinians, local and municipal elections seem to have assumed a new meaning and role. In fact, the upcoming election seems to be anything but a vote for a mayor or a member of a municipal or village council.

Hamas, whose leaders seem to be enthusiastic and optimistic about the upcoming vote, has seized the opportunity to wage a massive election campaign on Facebook and Twitter to promote its extremist ideology through intimidation and by accusing its rivals of infidelity, blasphemy and profanity. Hamas’s message to the Palestinian voters: Vote for us or else you will be considered infidels and you will end up in hell.

The first sign of Hamas’s frightening platform emerged when one of its top muftis, Yunis Al-Astal, issued a fatwa (Islamic religious decree) banning Palestinians from voting for any other party other than Hamas. “Any person, male or female, who votes for a party other than Hamas will be considered an infidel and apostate and his or her repentance will not be accepted even if they fasted or prayed or performed the hajj [pilgrimage] to Mecca,” the mufti ruled.

The Hamas fatwa sparked a wave of anger from many Palestinians, who were quick to accuse the Islamist movement and its leaders of waging a campaign of intimidation and terror against voters.

“This is the policy of the Muslim Brotherhood [of which Hamas is an offshoot],” commented Hisham Sawalhi, a Palestinian from the West Bank. “Those who support Muslim Brotherhood are believers, while those who oppose them are infidels.”

A Hamas-affiliated cartoonist from the Gaza Strip, Baha Yasin, published a cartoon that carries the same message as the fatwa. “A Palestinian Muslim does not vote for secular infidels,” he captioned a cartoon that depicts supporters of Fatah as unbelievers who smoke nargilas and cigarettes. The caption accompanying the cartoon also denounces the Fatah supporters for “insulting Allah” and Islam.

Rajai Al-Halabi, who is in charge of the “women’s portfolio” in Hamas, also stirred up controversy when she appeared on Al-Jazeera to declare that Islam surfaced for the first time in the Gaza Strip with the creation of Hamas.

Her declaration, which came in the context of Hamas’s election campaign, drew strong condemnations and sarcastic remarks from many Palestinians. “This means that all those who died before the establishment of Hamas were infidels, commented Hamzeh Abu Ajaleh, a Palestinian from the Gaza Strip. “In any case, my grandfather did not consume alcohol and my grandmother used to cover her head,” he wrote in reaction to the statement by the senior Hamas official.

“Hamas has launched its unofficial election campaign by issuing deeds of forgiveness and taking us back to the Middle Ages,” said Palestinian political analyst Mahmoud Sabri.

“They have turned mosques into podiums for political, and not religious, lecturing. Any citizen who does not vote for Hamas will be closer to entering hell and will be asked by Allah on Doomsday why he or she did not vote for the right people. Hamas wants us to believe that if we do not support them, then we are against Islam and that we are participating in the war against our religion.”

Some Palestinians in the Gaza Strip said this week that Hamas has formed a special team to manage its propaganda campaign in preparation for the local and municipal elections. This team has begun operating on two fronts: first, a public campaign to market Hamas’s “achievements” since its violent takeover of the Gaza Strip in the summer of 2007; and second, one to wage a campaign of defamation against its rivals in Fatah, depicting them as traitors and Israeli agents and infidels and enemies of Allah and Islam.

“A vote for Hamas is a vote for the resistance and a vote in support of Allah and Islam,” reads one of Hamas’s election banners. Other banners posted on social media highlight the fact that most of the Fatah representatives are not faithful Muslims and do not pray or practice any of the other pillars of Islam.

This Hamas tactic has worked in the past. In the previous parliamentary election, Hamas used the same propaganda to brainwash and scare Palestinian voters. Hamas has also resorted to the same rhetoric in campaigns during elections for university student councils and various professional unions in the West Bank and Gaza Strip. Some Palestinians, particularly Fatah loyalists, fear that Hamas will once again manage to persuade Palestinian voters to cast their ballots in favor of the Islamist movement by exploiting Islam to intimidate them.

However, there is no ignoring that there are other reasons why Palestinians may nevertheless prefer to vote for Hamas and not Fatah. Nearly two months before the election, tensions in Fatah seem to be on the rise. Many Fatah representatives are threatening to run in the election as independent candidates or as representatives of their clans. This already happened in the 2006 parliamentary election and resulted in Fatah’s defeat to Hamas. And this is why some Fatah officials already have second thoughts about the election and some of them have even openly called on the Palestinian Authority leadership to consider delaying them until further notice.

For Hamas, the upcoming election is an opportunity to consolidate its power and extend its control from the Gaza Strip to the West Bank. Hamas also views the local and municipal elections as a test for future parliamentary and even presidential elections. Without question, a Hamas victory in the upcoming elections would have an impact on any future elections and would send a message to the world that the Palestinian Authority is weak and has lost much of its credibility and standing among Palestinians. By calling the election and allowing Hamas to participate, Abbas is digging his own grave. Not to mention that he will be presiding over the burial of any so-called peace process with Israel.