REPORT: “Toadzzila” discovered in Australia in time for Torah reading about plague of frogs

The Nile shall swarm with frogs, and they shall come up and enter your palace, your bedchamber and your bed, the houses of your courtiers and your people, and your ovens and your kneading bowls.

Home » REPORT: “Toadzzila” discovered in Australia in time for Torah reading about plague of frogs 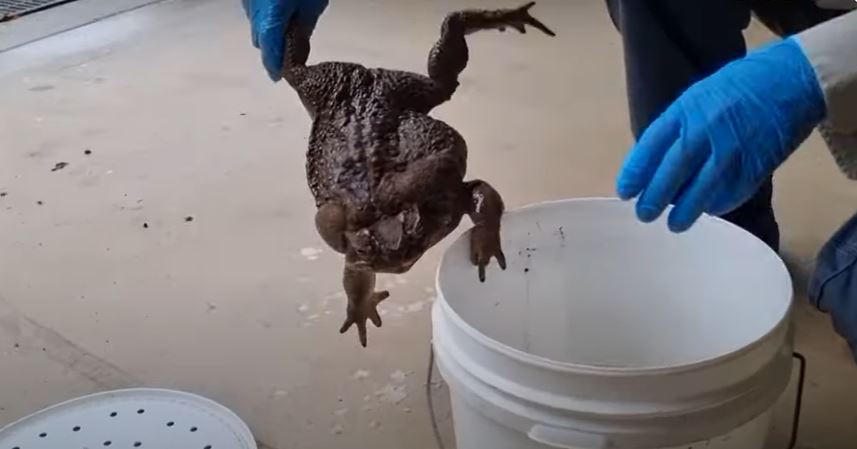 A toad, reported to be the largest ever recorded, was found in north Queensland, Australia. The description of the huge and warty amphibian might be seen as similar to a Midrash concerning the plague that struck Egypt.

7 News reported on Thursday that rangers conducting track work in Conway National Park, near Airlie Beach found a  cane toad that weighed in at 2.7 kilograms which may be a new record. The Guinness World Record for the largest toad in history is 2.65kg – set by a pet toad in Sweden in 1991. Specimens of over 2.5kg are considered quite rare. Rangers believe it was a female due to its size.

The rangers were driving through the park when they stopped their vehicle to allow a snake to cross their path. They stepped out and encountered the toad.

“I reached down and grabbed the cane toad and couldn’t believe how big and heavy it was,” Gray said. “We dubbed it Toadzilla, and quickly put it into a container so we could remove it from the wild. A cane toad that size will eat anything it can fit into its mouth, and that includes insects, reptiles, and small mammals.”

The cane toad is a large, terrestrial toad native to South and mainland Central America. The species was introduced into Northern Australia in 1935 as a method of agricultural pest control but is now considered invasive and has had a negative effect on biodiversity, lowering the populations of native lizards. Toads are one of Australia’s most damaging pests and are now estimated to number over two billion.

Adult cane toads average 4–6 inches in length and have a life expectancy of 10 to 15 years in the wild. It has poison glands, and the tadpoles are highly toxic to most animals if ingested. Its toxic skin can kill many animals, both wild and domesticated, and cane toads are particularly dangerous to dogs.

This week, Jews around the world are reading the Torah portion of Va’eira (Exodus 6:2–9:35) which includes a description of the plague of frogs that God brought onto Egypt.  The Jewish commentaries note that while Moses threatens Pharoah with a plague of frogs (Exodus 7:27), when the plague does appear, the word ‘frog’ is in the singular tzfardea (Exodus 8:2). The Midrash explains that God sent one huge frog from the Nile., The terrified Egyptians hit it, causing it to spew out countless little frogs. The Egyptians continued to hit the frog until the entire land was covered with frogs. As the original “frogzilla” had left the Nile, the ensuing frogs could not return to their natural environment.