Is a Biden-Netanyahu Brawl Inevitable?

Home » Is a Biden-Netanyahu Brawl Inevitable? 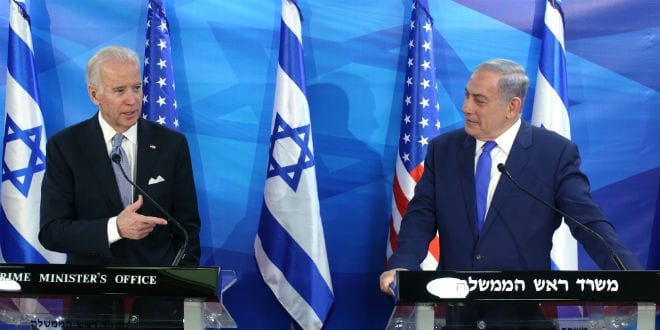 If you listen to the statements from both the Israeli and American governments, all’s well between Jerusalem and Washington these days. But despite the bromides being uttered by high-ranking officials, the pretense that there are no disputes between them that can’t be dealt with privately is wearing thin.

The pressure from the Israeli left and its many American supporters for the United States to signal its opposition to the new Benjamin Netanyahu-led government is growing. The question is: Will prudence and the desire on the part of President Joe Biden and his foreign-policy team to avoid a messy confrontation with Israel survive the coming weeks and months, as the anti-Bibi resistance intensifies?

Israel was not at the top of Biden’s agenda during his first two years in office. He was distracted by the coronavirus pandemic, a tottering economy and the disastrous withdrawal from Afghanistan.

He was eager to resume a policy of appeasement toward Iran, via an even more dangerous nuclear deal, though that effort stalled. And since last February, Washington has treated aiding Ukraine fend off a Russian invasion as its top priority, a position that didn’t always dovetail with its push with Iran.

To his credit, Biden wasn’t under the delusion that the Palestinians wanted peace or that a resumption of negotiations with them would bring forth the dream of a two-state solution to the conflict with Israel. So, although he is an ardent believer in that failed concept, he was the first president in a generation to come into office who did not treat the quest for a Palestinian state as a priority.

Moreover, relations with the multi-party coalition led first by Naftali Bennett and then Yair Lapid were also generally good, as the two sought to avoid open disagreements with Washington, even when the Americans’ desire to appease Iran presented a genuine threat to Israeli security. But with Netanyahu back in power, the pressure on Biden to start acting like his old boss Barack Obama and go to war with Netanyahu is getting harder to ignore. New York Times columnist Thomas Friedman spoke for many liberals when he wrote this week begging Biden to “save Israel.”

Friedman’s incoherent description of the new coalition’s plans for judicial reform was predictably ignorant and distorted. For example, his horror at the idea of scrapping the committee system for choosing new Supreme Court justices that gives the existing judges the right to choose and/or veto potential successors in favor of one that gives the representatives of the voters more say, was laughable.

Would any American stand for a system that allowed the U.S. Supreme Court to do the same? Would anyone, on the American left or right, put up with a court that considered itself to have the right to intervene in any dispute or governmental action, or to rule the Constitution as Israel’s supremes have given themselves the right to do, on the basis of nothing more than what they think is or isn’t “reasonable?”

But Friedman’s critique went further than the attack on a necessary attempt to rein in an out-of-control court. He hyperbolically faulted the voters who gave Netanyahu’s coalition a clear majority in the Knesset for being “hostile to American values” and, even worse, have more in common with Republicans than Democrats like Rep. Alexandria Ocasio-Cortez (D-N.Y.)

Citing some of the partisan incitement against the government in the Times of Israel and Haaretz, he falsely accused Netanyahu of trying to emulate Turkish President Recep Tayyip Erdoğan. Quoting Netanyahu’s defeated political foes, he labeled the new government as “fascist.”

This is familiar stuff to many Americans who, like Biden, claim to love Israel but only on their own terms. They only think Israel deserves support as long as it obeys orders from Washington and acts as if it is a deep blue colony of liberal Jews living abroad, rather than a Jewish state filled with people with their own ideas, and who understand that they live in the Middle East and not the Upper West Side of Manhattan.

Much like the president, Friedman’s been wrong about every major issue of the last four decades, but has never been held accountable for it. As easy as it would be to dismiss him as a caricature of foreign-policy-establishment cluelessness and dogmatic adherence to failed ideas, however, his call for the United States to intervene in Israeli politics to aid the opposition’s attempt to topple a democratically elected government resonates among many Democrats.

Still, that isn’t the public message Biden has been trying to convey. U.S. Ambassador to Israel Tom Nides has sought to interfere in his host’s domestic affairs when it comes to issues like settlements and preserving the mythical possibility of a two-state solution. But he’s also been careful to state that he won’t be conducting any boycotts of controversial members of Netanyahu’s new government, such as Finance Minister Bezalel Smotrich and National Security Minister Itamar Ben-Gvir.

Other figures, like Secretary of State Antony Blinken and National Security Advisor Jake Sullivan, have similarly avoided making overt statements opposing Netanyahu, even though they are uncomfortable with the new government’s desire to step up efforts to hold the Palestinian Authority accountable for its incitement to and support for the current uptick in terrorism.

In return, Netanyahu has similarly tried to send signals that he wants to avoid trouble with Biden. He reportedly told a private gathering sponsored by AIPAC that he thinks the U.S. and Israel are closer than before with respect to the Iranian nuclear threat. And if Biden truly believes, as he said last month, that his foolish efforts to revive the nuclear deal with the regime in Tehran is “dead,” due to its brutal suppression of mass demonstrations against its despotic rule and support for Russia in Ukraine, perhaps that’s true.

But if there’s anything that we’ve learned about Biden’s presidency, it’s that he has steadily drifted to the left for fear of offending the activist and intersectional base of his party. That’s been evident on a host of issues, ranging from illegal immigration to his bending of the knee to the Black Lives Matter movement and the imposition of the hard-left’s DEI—diversity, equity and inclusion—-catechism throughout the government.

For now, Biden is too committed to doubling down on an endless and unwinnable war in Ukraine to want to get drawn into a battle over who should govern Israel. But as the Israeli left turns up the volume on its anti-Bibi resistance effort, the idea that America has a “duty” to save Israel from itself will be gaining more and more support in the liberal corporate media. The fact that distorted coverage of Israeli judicial reform is already getting more attention in the American press than Iranian executions of dissidents is a sign of what is to come.

And as the 2024 presidential race begins in earnest later this year, Biden’s need to curry favor with his party’s left wing will make him less, not more, likely to avoid fights with the Jewish state. Whether the excuse concerns the Palestinians or Israeli efforts to stop Iran, it won’t be easy for Netanyahu to avoid such battles.

Yet those who are eager for Biden to start ratcheting up the pressure on Netanyahu have short memories. Obama spent his eight years in the White House constantly plotting to undermine and defeat Netanyahu. But each time he did so, he only strengthened the prime minister.

Netanyahu has many political enemies at home, but those who want to save Israel from itself always forget that its citizens have little interest in accepting diktats from American presidents or liberal Jews who want a fantasy Israel rather than the real one. The more Biden leans on Netanyahu or tries to influence the debate in the Jewish state, the less likely it is that the prime minister will be beaten.