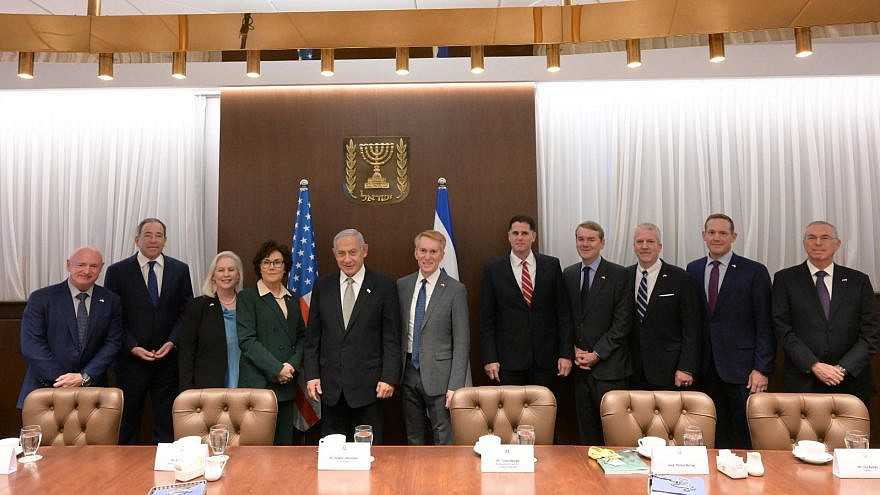 The lawmakers previously visited Morocco, Bahrain and the United Arab Emirates, countries that, in addition to Sudan, normalized relations with Israel as part of the Trump administration-brokered agreements.

During Wednesday’s meeting, participants discussed the burgeoning partnerships forged by the deals and the potential to tighten the cooperation in all areas. They also addressed the importance of cross-party support in the U.S. Congress for the Abraham Accords and for opportunities to expand them.

Netanyahu presented evidence regarding the Iranian threat and how it can be combated by fielding a credible military option and using economic and diplomatic pressure.

Earlier Wednesday, Nides discussed the possibility of bringing Saudi Arabia into the fold, saying that it was possible but difficult.

“There is nothing that would make us happier if, at some point, Saudi Arabia will normalize ties with Israel. It would be great for both countries and the security in the region,” said Nides.

“I don’t think we’re there yet. Obviously, it’s a priority, and we will work to achieve that goal, but I’m under no illusion; this is complicated, and this is hard, but we will work collectively to achieve this in the future,” he added.

Nides said that he has faith in Netanyahu and plans to work with his government.

“At the end of the day, we want to work with this democratically-elected government. As Netanyahu said many times, he is very much in charge and he has his hands on the wheel, and we will work with him to make sure that we keep that car on the road,” he said.

Later in the day, the American lawmakers met with Israeli Defense Minister Yoav Gallant, who emphasized the importance of the Abraham Accords in ensuring peace and stability.

“While Iran operates to destabilize the region, our work with U.S. partners is critical to integrating old, new and potential partners into a larger defense framework, he said. “The CENTCOM [U.S. Central Command] umbrella is a cornerstone of the Accords—our operational cooperation is unprecedented.”

Gallant stressed the importance of maintaining Israel’s Qualitative Military Edge in the face of the multi-dimensional Iranian threat.

He met on Monday with CENTCOM commander Gen. Michael Kurilla at the Israel Defense Forces headquarters in Tel Aviv.

Israel was assigned to CENTCOM’s area of responsibility on Sept. 1, 2021, moving over from the European Command (EUCOM) in a transfer announced during the final days of the Trump administration.

Wednesday’s meetings come on the backdrop of a report that Rosen told Israeli officials that she and members of the delegation would not meet with Finance Minister Bezalel Smotrich (Religious Zionism Party) or National Security Minister Itamar Ben-Gvir (Otzma Yehudit).

Foreign Ministry officials cited in the report said that the American delegation was anyway not slated to meet with the two ministers.