He also defeated the Moabites. He made them lie down on the ground and he measured them off with a cord; he measured out two lengths of cord for those who were to be put to death, and one length for those to be spared. And the Moabites became tributary vassals of David. 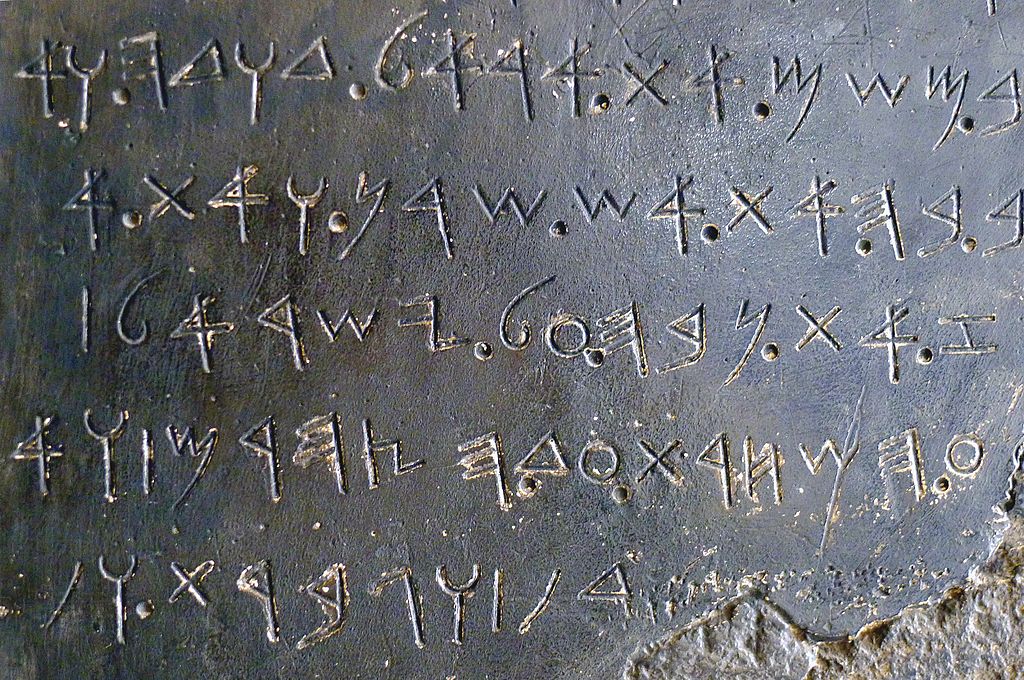 Newly concluded research using advanced photographic techniques claim to having ended a longstanding dispute over a 2,800-year-old Moabite inscription, concluding that it is indeed referring to the royal Israelite House of David.

The Mesha Stele, also known as the Moabite Stone, was discovered intact in Jordan roughly 15 miles east of the Dead Sea in 1868. Archaeologists dated the inscription to around 840 BCE. The next year, the stele was smashed into several fragments by the Bani Hamida tribe as an act of defiance against the Ottoman authorities. In Biblical times, the location, Dibon, was the capital of Moab.

The stele, inscribed with 34 lines of text in the Moabite language, glorifies the military victories of King Mesha,  including vanquishing Israel and possibly Judah, referred to as the “House of David” and also refers to the “Altar of David.”

The account inscribed in the stele parallels, with some differences, an episode in the Books of Kings (2 Kings 3:4–28) which describes the king of Mesha in Moab rebelling against paying a tribute to the king of Israel.

The black basalt stele is the most extensive inscription ever recovered that refers to the kingdom of Israel and bears the earliest extrabiblical reference to the Israelite god. Its authenticity has been disputed over the years, and some biblical minimalists suggest the text was not historical, but a biblical allegory. Due to it being broken, archaeologists have been unable to decipher it with absolute certainty.  The Moabite phrase “House of David” consists of five letters but only the first and fourth letters of the series, bet and waw were completely clear. Three letters completing the reference to David were assumed to be taw (like modern Hebrew tav), dalet, and dalet.

But these letters were unclear and the actual reference to King David was in doubt.

In 2019, the prominent Israeli archaeologist Israel Finkelstein, contested the reference to David in the stele, suggesting that the letters had been misidentified. Finkelstein suggested that the monarch referred to in the stele was Balak, a biblical Moabite who lived 200 years before David.

The Mesha Stele is currently on display at the Louvre Museum in Paris, France. Before the Mesha Stele was damaged in 1869, a squeeze (paper-mache impression) of the inscription was made.

Researchers André Lemaire and Jean-Philippe Delorme examined the squeeze to determine if the reference to the “House of David” referred to the Biblical king. Their conclusions were published in the Biblical Archaeology Review in an article titled “Mesha’s Stele and the House of David.” The publication is not a peer-reviewed journal.

Using digital photographs taken by the West Semitic Research Project of the University of Southern California in 2015 as well as digital photographs of the stele, the team applied a method called Reflectance Transformation Imaging (RTI), in which numerous digital images are taken of an artifact from different angles and then combined to create a precise, three-dimensional digital rendering of the piece. The Louvre also used these new, high-resolution pictures and projected light onto them coming directly through the 150-year-old squeeze paper.

The “House of David ” reference appearing on its 31st line consists of five letters: btdwd (bt = “house of” and dwd = David). The first and fourth letters, bet and waw, were visible beforehand. Lemaire and Delorme discovered traces of the other three letters, taw, dalet, and dalet, on the new images. They concluded that the Mesha Stele is indeed referring to “the house of David”.The historicity of Biblical King David as referred to in the Mesha Stele was corroborated by the Tel Dan Stele discovered in 1993 and is believed to have been created in 870–750 BCE. The stele contains several lines of Aramaic referring to an individual who killed Jehoram of Israel, the son of Ahab and king of the house of David. This is described in II Kings 9:24.