Peace: A Dictatorial and Deceptive Word 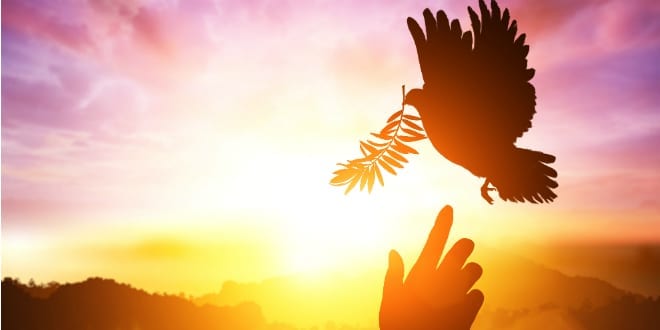 If you will not fight when your victory is sure and not too costly; you may come to the moment when you will have to fight with all the odds against you and only a precarious chance of survival. — Winston Churchill, from The Gathering Storm

The proposition that democracies are generally at peace with each other is [so] strongly supported … [it] has led some scholars to claim that this finding is probably the closest thing that we have to a law in international politics. — Profs. Zeev Maoz and Bruce Russett in International Interactions, Vol. 17, No. 3, 1992,  pp. 245-6

Events of the last year, such as the ousted Lapid government’s hastily concocted maritime boundary agreement with Lebanon, allegedly to avert war, and the injudicious attempt to resurrect the two-state formula as a means of resolving the Israeli-Palestinian conflict, have once again stoked discussion of the relationship between the Jewish state and its still-belligerent Arab antagonists.

Inevitably, this focuses attention on the notion of “peace”—its feasibility, durability and elemental components.

To adequately contend with this question, it is crucial to realize that the word “peace” is both dictatorial and deceptive.

It is dictatorial because, just as one cannot declare opposition to a dictator, one cannot oppose peace—certainly not if one wishes access to “polite company.” Indeed, much like a dictator, “peace” commands support from all.

However, “peace” is also a deceptive word, because the same five letters can be used to describe two completely different—indeed, antithetical—political configurations.

On the one hand, peace can mean “mutual harmony” between parties. On the other, it can mean “the absence of violence maintained by deterrence.”

Vastly different sets of conditions make for the feasibility of these different kinds of peace.

In a political system comprised of democratically governed states—such as in Western Europe or North America—with open borders, free exchange of ideas and largely unhindered movement of people, mutual harmony is a feasible kind of peace.

In a political system comprised mainly of dictatorial regimes—as in the Arab and much of the wider Muslim world—such unregulated flows of ideas, funds and people do not exist and are largely incompatible with the unchallenged rule of the incumbent dictator.

In conditions of “mutual harmony,” peace—that is, the absence of violence—is the natural state of affairs. When disputes arise, there will be a strong tendency for the system to revert to its former non-violent state.

However, in a situation in which non-violence is sustained only by adequate deterrence, this is not true. If deterrence wanes, violence between the parties will result. There will be no tendency towards non-violent stability and the system will descend into belligerent conflict.

For peace-making and peace-maintenance to be successful, it is imperative to correctly diagnose which of these two realities prevail. After all, if only a “peace of deterrence” is feasible, adopting a peace-making/peace-maintaining policy designed to attain “mutual harmony” will not succeed.

Indeed, it will make war more probable by forcing one side to make conciliatory gestures that undermine its perceived deterrence.

Thus, in a peace of mutual harmony, a policy of compromise and concession may well be appropriate. In a peace of deterrence, such a course would be disastrously inappropriate.

So, on the one hand, a party to a conflict may make an initial concession and the opposing party may understand that this concession was made as a sign of goodwill. Therefore, the opponent feels obliged to make a reciprocal concession.

Thus, via a process of concessions and counter-concessions, matters converge on some kind of consensual resolution.

However, there is another, equally feasible, situation, in which a party to a conflict is tempted into making an initial concession, but the opposing side sees this not as a sign of goodwill, but as a sign of weakness.

Rather than begin a process of reciprocal concessions, the initial concession prompts demands for further and more far-reaching concessions. Instead of converging toward a consensual resolution, a coercive or violent response inevitably follows.

After all, even the most pliable party will, at some point, reach the limit of the concessions that can be made. When such a limit is reached, he will find themselves in a far weaker position than he was at the start of the process.

“If you will not fight…”

For over a decade, I have warned repeatedly that, by its innate reticence to engage in a decisive large-scale offensive against its despotic adversaries, Israel is continually backing away from conflicts that it can win, while risking backing itself into a conflict that it cannot win or can win only at ruinous cost.

This danger was eloquently described by Winston Churchill in the first volume of his seminal series on World War II: “If you will not fight when your victory is sure and not too costly; you may come to the moment when you will have to fight with all the odds against you and only a precarious chance of survival.”

The futility of compromise

In the perennial conflict between Israel and its Arab neighbors, Israel’s attempts at compromise have proven not only futile but counterproductive. Despite a series of gut-wrenching concessions, peace seems further away than ever. Every concession made was not followed by the offer of a counter-concession but by demands for further and more far-reaching concessions.

Clearly then, the only kind of peace that is feasible in this case is a peace of deterrence, not a peace of mutual harmony. Concessions and compromises will only inflame the conflict further.

Unless the Jews convey the unequivocal message that any challenge to their political independence and national sovereignty will be met with overwhelming lethal force, they will increasingly be the victims of such force at the hands of their Arab adversaries.