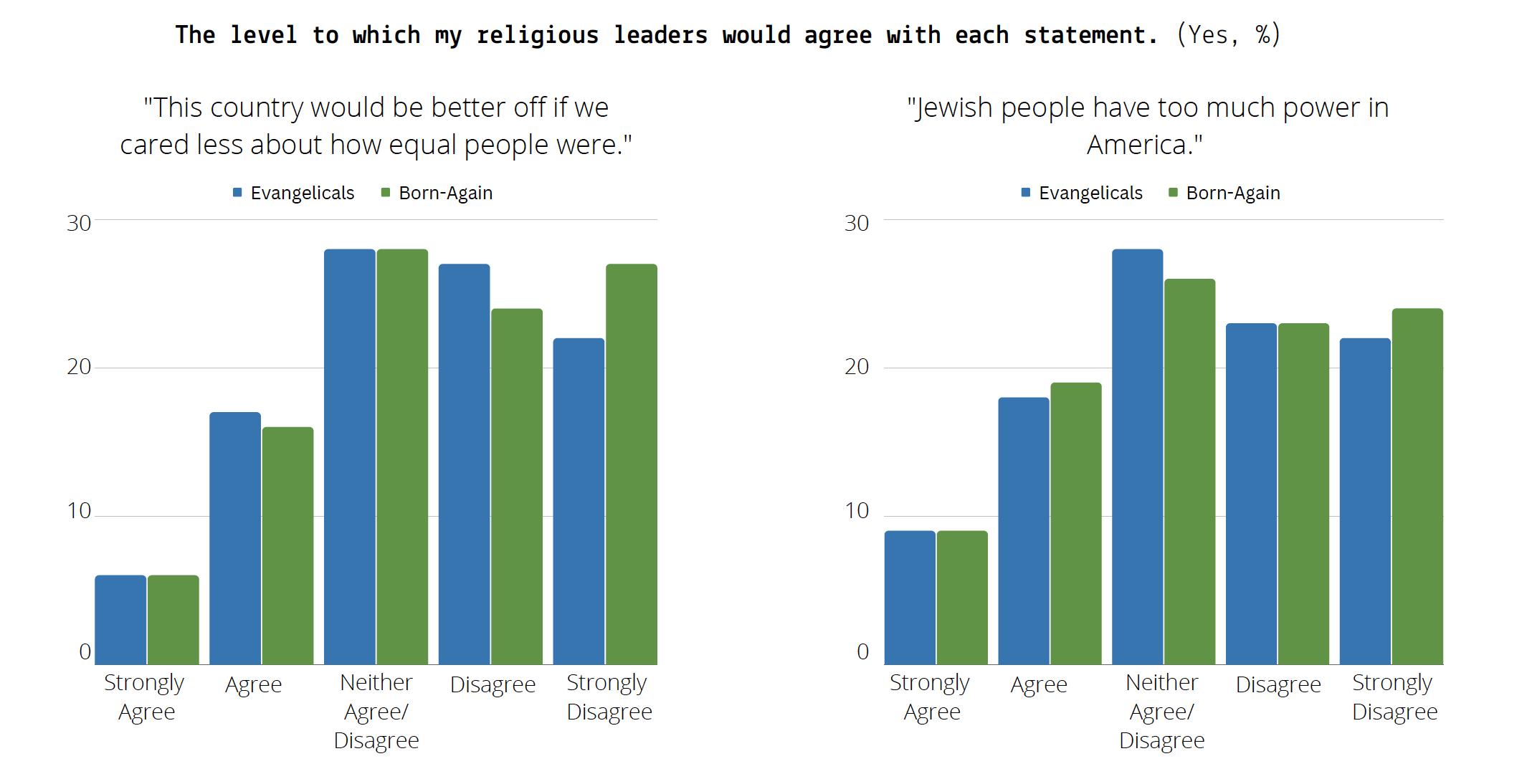 A new study shows that young evangelicals are heavily influenced in secular matters by their faith leaders. However, about 25% of the respondents also said that their leaders would agree that Jewish people have too much power in the country. Research from last year already suggested that supporting Israel is falling by the wayside with this demographic due to an increasing belief in “post-millennial” theology that deemphasizes Israel’s role in the end-of-days.

The recent study was carried out by Neighborly Faith, a national, student-led movement that works to grow leadership capacity among Evangelical students for building interfaith communities with Muslims. The recently concluded study was titled, “Who is influencing young Evangelicals on politics?” and focused on how religious leaders shape evangelical young adults, focusing on what messages Evangelical young adults are getting from their religious leaders and understanding how these messages impact their civic engagement.

The study included a nationally representative survey of 1,989 young adults aged 18 to 25 conducted in May and June 2022, oversampling for Evangelical and born-again young adults to establish an understanding of religious leaders’ unique capacity to impact young Evangelicals.

Over a quarter of evangelical young adults said that their leaders would agree that Jewish people have too much power in the country.

This ancient antisemitic trope is deeply ingrained in the public consciousness and a survey by the Anti-Defamation League revealed that 11% of American adults (about 28 million people) believe that Jews have too much power in certain areas such as business. This is especially disturbing coming from within the Protestant church as Martin Luther, the founder of Christian Protestantism, wrote several antisemitic treatises in the latter part of his life.

While major evangelical publications regularly denounce anti-Semitism as evil, in the strongest terms, other Christian media and ministries continue to disseminate antisemitic beliefs. Tru News, an online ministry run by Rick Wiles,  had over 185,000 subscribers and videos with over 175 million views on YouTube until it was banned by the video channel. Wiles aired antisemitic conspiracy theories including his claim that COVID originated in synagogues. Despite being a conservative and campaigning for the Republican party, Wiles was anti-Israel and condemned pro-Israel Christians as being in a “marriage with Satan”.

This liberal trend among young evangelicals is also affecting their views on Israel. According to a poll conducted last year that was overseen by the social research firm Barna Group and scholars at the University of North Carolina at Pembroke, 42% of self-identified evangelical and born-again Christians aged 18-29 said they supported neither Israel nor Palestinians regarding the conflict in the region., 24.3% said they supported, leaned toward or very strongly supported Palestinians, whereas 33.6% expressed the same sentiment for Israel.

In a similar study carried out in 2018 by the same organization nearly 69% of young evangelicals supported or leaned toward support for Israel, with only 5.4% saying the same about Palestinians living in the occupied territories. At the time, around 26% of those polled said they supported neither.

The 2018 results, published in Religion News, showed that the opinions of young evangelicals regarding Israel were roughly equivalent to older evangelicals whereas, in the more recent results, younger evangelicals diverged greatly from their older counterparts.

The researchers believed that this was due to a new generation of faith leaders.

“We are thinking that perhaps young evangelicals we see in our sample in 2021 are gravitating to churches led by these amillennialist and post-millennialist, younger, more diverse preachers,” UNCP professor Motti Inbari said. “So the messages they’re receiving fundamentally contrast with the more pro-Israel message we see in the broader evangelical community.”

He suggested that support for Israel among conservative Christians is often attached to “pre-millennial” religious beliefs, which mark Jewish presence in Israel as a crucial part of the End Times, a belief that is less prevalent among younger evangelical pastors who espouse “amillennial” or “post-millennial” theology that believes “Israel’s role in the End Times is no longer consequential for redemption.”

“We are thinking that perhaps young evangelicals we see in our sample in 2021 are gravitating to churches led by these amillennialist and post-millennialist, younger, more diverse preachers,” Inbari said. “So the messages they’re receiving fundamentally contrast with the more pro-Israel message we see in the broader evangelical community.”