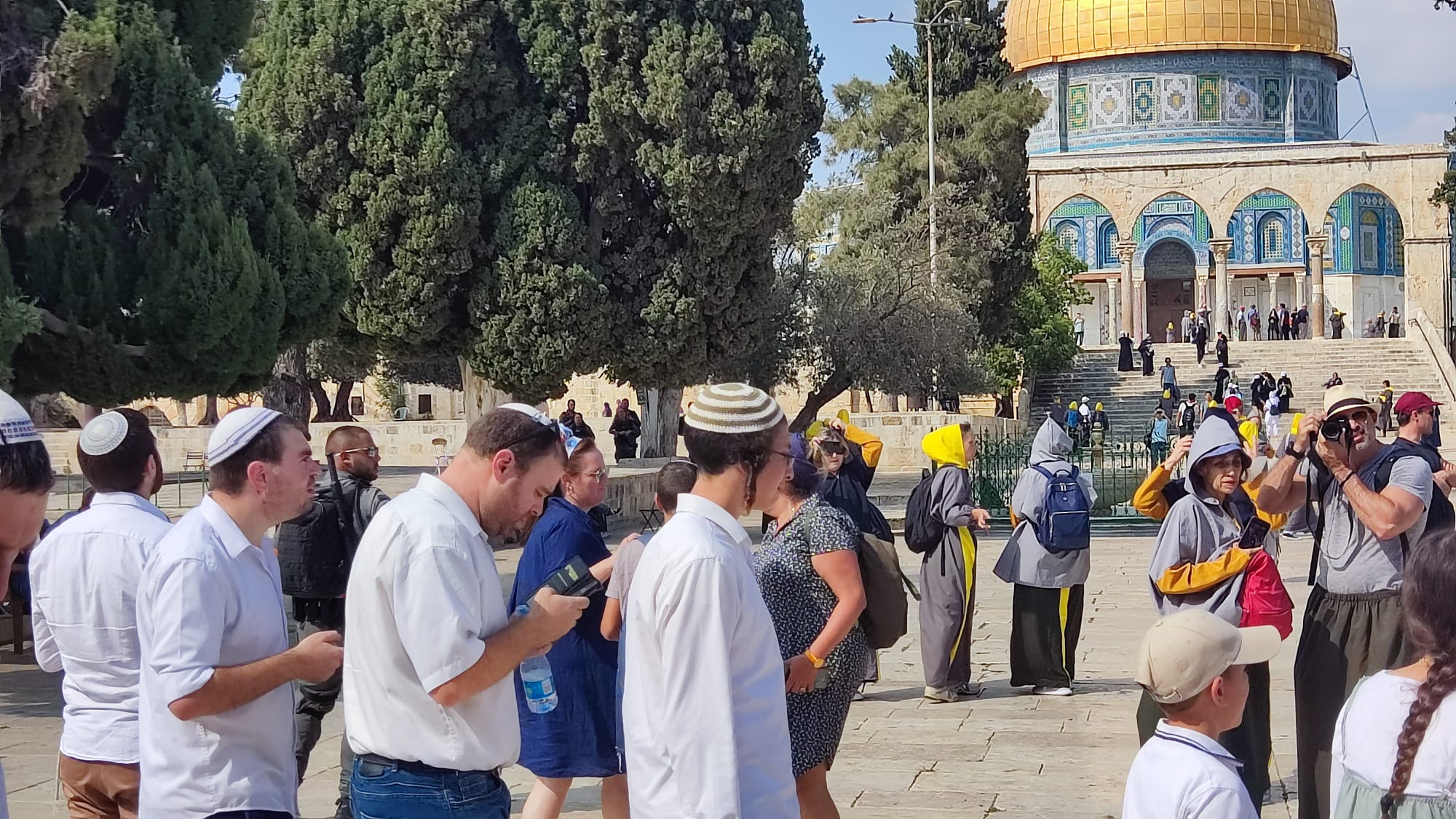 Some Christian tourists visiting the Temple Mount have been forced by the Jerusalem Islamic Waqf to wear garments adorned with bright yellow stripes, some Israeli tour guides have denounced. The choice of color does not appear to be a coincidence, as in the past yellow garments symbolized non-Muslims’ diminished status in the world of Islam.

The Waqf is the Jordanian entity that has a custodial status at Jerusalem’s holy sites. The Temple Mount is known to Muslims as the Haram al-Sharif or Noble Sanctuary, where the Al-Aqsa Mosque stands. Non-Muslims, including Jews, can visit the compound where the Holy Temple of Jerusalem used to stand only under severe restrictions.

About two months ago, a Norwegian Pastor who prefers to remain anonymous led a group of 35 Christian tourists on a visit to Israel. The pastor arrived a week ahead of the group to prepare for the trip. He ascended to the Temple Mount with three Christian women. When they arrived, representatives of the Waqf approached the group and instructed them to wear special garments they provided. The long brown garment covered their entire body and they were also required by the Waqf to wear a large head covering. The garments had a prominent yellow stripe running down the sides.

The pastor explained that he had visited Israel dozens of times and ascended the Temple Mount several times in the past. This was the first time he had been required to wear the strange garb. He added that the women felt humiliated. The pastor described the episode to Amit Barak, the head of the Jerusalemites Initiative and a tour guide. He emphasized that due to the humiliating incident, he will no longer take groups to the Temple Mount.

This story was corroborated by the Temple Mount activist organization Beyadenu, which runs tours at the site. Their guides have witnessed Waqf representatives requiring Christian and non-Muslim tourists to wear the same long garments with the yellow stripe.

“I don’t remember this happening until recently,” one tour guide told Israel365 News. “Certainly never with such a complete covering and certainly not a head covering.”

Yaakov Hayman,  an activist for Jewish prayer on the Temple Mount, frequently visits the Temple Mount and has observed the Waqf telling tourists to wear the garment on numerous occasions.

“It is not new but it is becoming more frequent,” Hayman said. “It may have to do with their strict code of modesty. The Muslim-Arab concept of modesty is very different than in the West and even male tourists are targeted for the Waqf garb. For this reason, this is more common in the summer when people tend to dress in more revealing clothing.”

“Since it was clearly intended to be humiliating, the Women for the Temple made modest skirts available for women,” he added. “But since the police intentionally separate Israeli Jews from tourists, the skirts have not been made available to tourists.”

Women for the Temple is the division of Beyadenu that deals with Temple Mount issues specific to women.

Immodestly dressed tourists at the site have generated Muslim ire in the past. Israel365 News obtained photos from the Norwegian pastor and also pictures taken at different times by Beyadenu tour guides. The Christian tourists in the photos did not appear to be immodestly dressed.

Barak suggested a different motive behind the peculiar garments with the prominent yellow stripe. He explained that in the ninth century, Umayyad Caliph Umar II published the “Pact of Omar” which detailed the conditions under which the Jews and Christians were permitted to live within Islam. This Islamic code of laws allowed the protégés to live safely, manage their communities and even authorized religious worship but under certain restrictions. Jews, Christians, and Samaritans were not allowed to build new prayer houses, ride horses, hold religious worship in public and, among other things, were required to wear clothes different from those of Muslims in the public sphere.

In the Baghdad Caliphate, non-Muslims were ordered to wear yellow pieces of clothing.

As recently as 2001, Afghanistan’s Hindus were required to wear yellow badges to segregate “un-Islamic” and “idolatrous” communities from Islamic ones.

Dr. Mordechai Kedar, a senior lecturer on Arabic culture at Bar-Ilan University who served for 25 years in IDF Military Intelligence, specializing in Islamic groups, does not agree that the yellow garment is a form of Zunār.

“The Waqf is fighting two battles,” Dr. Kedar explained. “They want to dominate the Jews and control the Temple Mount. They do this by actively abusing and confronting the Israelis in every way they can, on all fronts. But at the same time, they are fighting a public relations propaganda battle. They want to present themselves to the world as a peace-loving oppressed minority. So the Waqf gives this distinctive clothing to tourists as a sign to their people not to attack or abuse them.”

“The Palestinians present one face to Israelis and another very different face to the outside world,” Dr. Kedar emphasized.

While Israeli law mandates equality and freedom of religion at holy sites, the Israeli police enforce restrictions on the Temple Mount due to threats of Muslim-Arab violence in response to a Jewish presence at the site. Israeli Jews are limited in the times they can visit the site, must undergo a background check and a search, and may not bring ritual objects or books onto the site. Israeli flags and nationalist images are prohibited. They may not pray or perform any rituals. They are only permitted to enter the site via one gate and must adhere to a strict time frame and path. They must remain in limited groups and are accompanied at all times by a police officer for their safety and ensure they adhere to the restrictions.

Similar restrictions apply also to tourists, Jewish and Christian alike. Tourists are only allowed to enter the Temple Mount through one gate (the Mughrabim/Hillel Gate), creating very long lines. There are no directions or signs leading to the Temple Mount at the entrance in Hebrew or in English. While they are permitted to wander the site freely, they are not offered police accompaniment which leaves them open to harassment by Arabs at the site.

Akiva Ariel, a spokesman for Beyadenu, explained that non-Israeli visitors are not given instructions at the site. While the Israeli police will not prevent them from praying or performing rituals at the site, Ariel has overheard tour guides instructing their groups to refrain. Christian tourists who violate this have been verbally and even physically assaulted by Muslims at the site.

Nisani stated that the situation was dangerous and unacceptable.

“The Israeli police neglect the tourists,” Nisani said. “There is no protection of Tourists on the Temple Mount. Israel is opening the door for the humiliation and assault of Christian tourists every day. The Israeli police’s only concern is to ensure that religious Jews adhere to the political ‘status quo’ This comes at the expense of the security of the tourists of all religions.”

The Israeli police responded to an inquiry by Israel365 News about the Waqf treatment of non-Muslim tourists at the Temple Mount:

“The Israel Police are responsible for ensuring the security and order on the Temple Mount, in accordance with long-standing established hours and rules. Security operations are conducted based on the situation and a range of considerations, using a variety of resources and methods, with a focus on the safety of all visitors, whether they are Jews, Christians, tourists, or Israelis. The Israel Police will continue to maintain order and ensure the safety of all visitors to the Temple Mount.”