The living know they will die. But the dead know nothing; they have no more recompense, for even the memory of them has died. 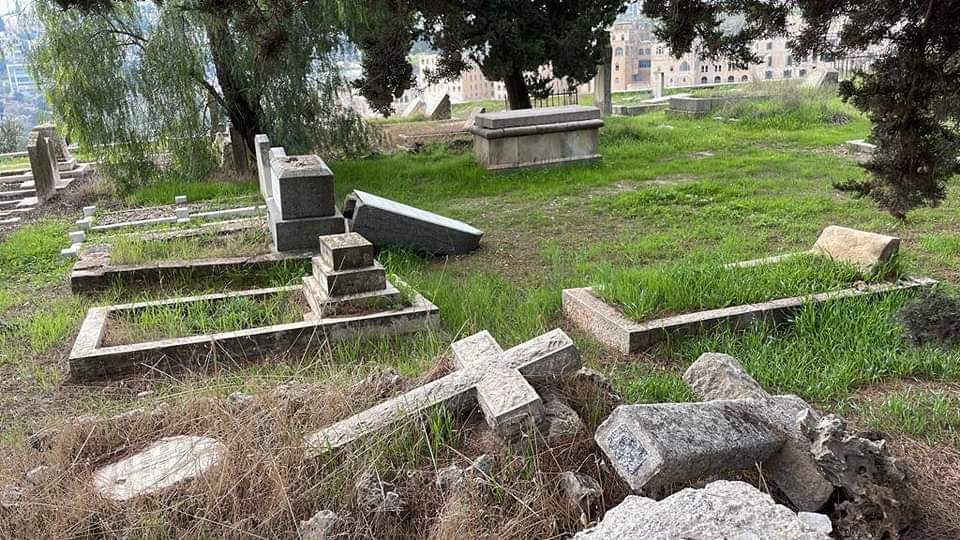 Two Jewish teens were caught on video desecrating at least 30 gravesites in the Protestant cemetery on Mount Zion on Sunday, according to the Jerusalem University College, causing an estimated $100,000 in damage.

“This damage isn’t just against the Christian community but also against a big part of the heritage of the world’s most important city, Jerusalem,” said the Jerusalem University College in a statement.

The acts of vandalism include breaking crosses, pushing over headstones, smashing iconography, and throwing debris over the edge of the cemetery wall. Among the desecrated graves were three commonwealth graves of Palestinian police officers and members of various Protestant communities, including Bishop Samuel Gobat, the second Protestant Bishop of Jerusalem, and the purchaser of the property on which the graveyard stands.

A similar incident took place in 2013, after which the graves were restored in a multifaith effort.

The cemetery is owned by the Anglican Church Missionary Trust Association Ltd., London, represented by the Episcopal Church in Jerusalem and The Middle East. Opened in 1848, the cemetery. The cemetery hosts commonwealth war graves including many non-Jews who supported Israel. Most notably,Oskar Schindler, who saved 1200 Jews during the holocaust who was designated as Righteous Among the Gentiles by Yad Vashem, is buried there.

Message to the media:

The Jerusalemites Initiative Association, which works to integrate and connect Arabic-speaking Jerusalem Christians to Israeli society, sent a request this morning to the Jerusalem district commander to investigate the incident and arrest the criminals who committed the horrific attack on the Protestant Christian cemetery on Mount Zion.

“We intend to contact ministers and Knesset members in the near future so that this crime does not pass in silence. Everything possible must be done to find the culprits and bring them to justice.”

“For our part, this incident will only make us act more to strengthen the relationship between the Christians and the Jews and the State of Israel and denounce all the extremists.”