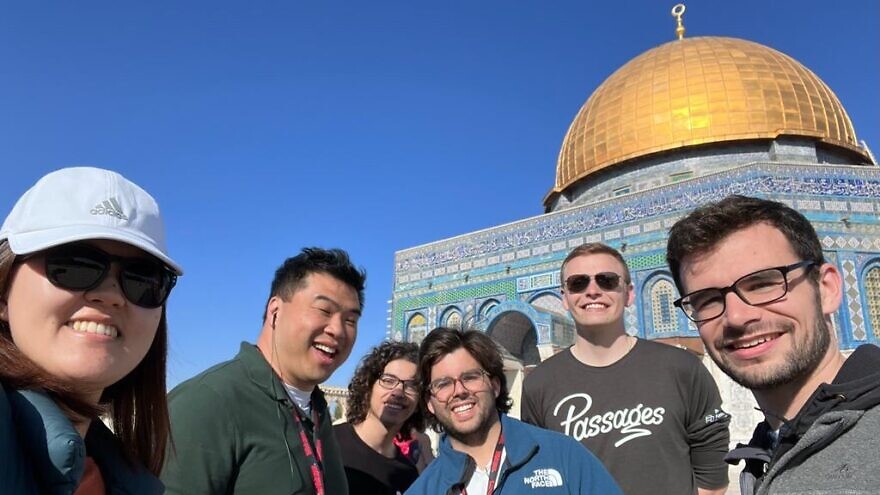 It is being dubbed the “Christian Birthright.”

The group of 120 American college students had just crisscrossed Israel on a nine-day journey, visited the requisite sites including a Friday night at the Western Wall, stops in Bethlehem and Nazareth, and must-see places such as the Yad Vashem in Jerusalem, before diving into the Israeli-Palestinian conflict with its diversity of narratives, security and multi-faith briefings, and visits to border areas.

At first glance, the boisterous, 20-something students gathered for a farewell event at a banquet hall in a Tel Aviv suburb, munching on burgers and pitas with chicken and tahini and dancing to American pop hits could easily be mistaken for participants in the Birthright Israel program, which has brought 800,000 young Jewish adults on 10-day tours of Israel, free of charge, over the last quarter century.

In fact, these young Americans are Christian students in Israel thanks to Passages, a six-year-old organization that brings practicing Christian college and graduate students from all over the United States to the Holy Land, to connect with the biblical roots of their faith and with the story that is modern Israel.

The trips come at a time when surveys show a marked drop in support for and interest in Israel even among young evangelicals, traditionally a pillar of support among Christians due, in part, to their predominantly conservative leanings and biblical worldview. This is happening despite burgeoning official interfaith relations in an era where “social justice” and progressive social media campaigns have become mainstream and politically correct college campuses hotbeds of anti-Israel activity. It also comes amid a global rise in antisemitism that is often hidden under a façade of

Passages was founded in 2016 by Rivka Kidron, previously an adviser to Prime Minister-designate Benjamin Netanyahu on Diaspora affairs and the Christian world, and Robert Nicholson, executive director of the Philos Project, an American nonprofit that strives to promote Christian engagement in the Middle East. The effort took off with major funding from Jewish investor and philanthropist Paul E. Singer and Steve Green, a prominent evangelical Christian leader, president of Hobby Lobby Stores and chairman of the board of Washington’s Museum of the Bible. Passages is currently supported by a variety of Jewish and Christian private donors.

The heavily-subsidized trips cost less than $3,000 and include a variety of required follow-up activities. They are offered to Christians of all denominations, not only evangelicals.

Over the last six years, the group has brought nearly 10,000 Christian students to Israel, the group’s chief communication officer said.

Kidron said that before Passages was started she noticed a lack of young Christians coming to Israel, and wanted to change that and connect them to the deep religious roots in Israel as a center of faith and spirituality for the world.

“Today Passages has had the privilege of helping thousands of students to deepen their faith and encounter modern Israel,” she said in a statement. “As I look towards the future, I envision the generational impact of the many strong leaders whose lives were changed because of their experience in Israel with Passages.”

Indeed, students on the organization’s most recent trip, which concluded this week, agreed that the visit to the Holy Land was life-changing and an eye-opener, a multi-cultural watershed in their journey of faith. At the same time, some participants said they recognize that the complicated political situation on the ground is not black and white, highlighting the challenges Israel faces in explaining its narrative even among faith-based students in today’s social justice-oriented America.

“People say that it is the Holy Land but you don’t process that and understand it until you experience it here,” said Nikko Wheeler, 27, a business, economics and psychology student at the University of Chicago who grew up in Iowa and previously served in a bomb disposal unit of the U.S. Army.

He said that the spiritual/religious dimension to the U.S.-Israel relationship, based on Judeo-Christian values from ancient times to modernity, easily supersedes the close military ties between the two allies.

“The conflict in the Middle East is so deep that without an in-depth understanding of the issues, [what you are hearing on campus] is just folly,” Wheeler said.

Raised in a Christian home, Wheeler was considered something of a black sheep in his family for questioning the Bible, until a series of personal life issues and nadirs restored his faith. Getting baptized in the Jordan River—something he previously refused to do back in the U.S.—was a highlight for him on the trip.

“As a Christian, you feel very peaceful and at home in Israel,” Wheeler said.

Maxwell Jones, 21, a junior at the University of Chicago from Alabama studying economics and pre-law, said, “I knew I was going to be signing up for something I had no knowledge of as I didn’t grow up in a Jewish or Palestinian community, and where the history of the past was passages in a textbook if anything.”

Like many trip participants, Jones grew up in a religious household immersed in Christian culture in the Bible Belt. “That is pretty much all I knew,” he said.

Out of his comfort zone

Moving to the liberal environment of the University of Chicago was his first major leap away from home and out of his comfort zone. “Moving to the city offered me diversity, and in that freedom I found great beauty in a lot of things that I grew up with,” he said. “Stepping out was a crucible that tested that which I thought and allowed a personal exploration.”

Knowing nothing about Judaism and little about the Israeli-Palestinian conflict even as he became connected with members of the Orthodox Jewish community via roommates, Jones was told about the opportunity to visit Israel by a pastor at the University Ministry of Christ Church (UMC) at the Chicago school.

What he did know was that tension over Israel was flaring on campus, where the undergraduate student government had issued a statement calling to “free Palestine” “from the River to the Sea”—a call for the elimination of Israel, from the Jordan River to the Mediterranean Sea—and endorsed the BDS boycott Israel movement.

A subsequent effort by Jewish groups at the university, including the campus Hillel, to obtain a retraction failed to gain enough votes. Like most students, however, Jones maintained his distance from the campus uproar over the faraway conflict.

“There was a very polarized and passionate group on both sides of the aisle,” he said.

The geopolitical and spiritual spheres

The trip has led to his realization of the need to be active—not a passive observer as he previously was—in both the geopolitical and spiritual spheres.

“On the spiritual sphere, in Israel no one questions how devout you are. In the U.S. people question if God exists. Here the question of who God is is much more present,” Jones said. “On the geopolitical sphere, on the ground you realize that it is really much more messy than the clean-cut ‘black and white’ facts you are presented with at campus. The moral ambiguity surprised me.”

After visiting the Holy Land, he said he feels a heightened sense of empathy and ability to connect, brought home when he bumped into a Jewish friend from campus, in the country on a Hillel tour, at the Western Wall (“an alien experience of ‘What are you doing here?’ and “a full circle moment”), which, Jones said, would not see him standing on the sidelines in the face of anti-Israel campus activity in the future.

Other students on this week’s trip, whose participants hailed from Hannibal-LaGrange University in Missouri and Regent University in Virginia as well as the U of C—had Jewish connections but equally little knowledge about modern-day Israel.

“As a pastor’s son, I had a big reputation to uphold, and I wanted to come to Israel to find my identity and to get closer to my faith,” said Caleb Lee, 21, from New York City.

Lee, an economics and classics major at the University of Chicago, said that while he had grown up with many Jewish friends, attended bar and bat mitzvahs and even Shabbat dinners, he too had never been to Israel and expected it to be chaotic, what with all the reports on the news and the periodic commotions on campus.

“I was surprised by the beauty of the land and how nice the people are,” he said, adding that the visit gave his faith a boost, though he too found himself “more confused than ever” about the conflict, which he also says is not black and white.

Back home in the U.S., the ability of students from one faith to connect with other faiths and to work together on common goals—on campus and beyond—is challenged in a society that pushes comfort first, Jones said.

“The question is: Are people willing to be uncomfortable, the first start in personal growth? And the answer is ‘No.’ We are talking about a very sheltered generation that likes to be comfortable. I am thankful that my family supported my being uncomfortable,” he said.