Biden compares Ukraine’s struggle against Russia to the Hanukkah story

For it is Hashem your God who marches with you to do battle for you against your enemy, to bring you victory.” 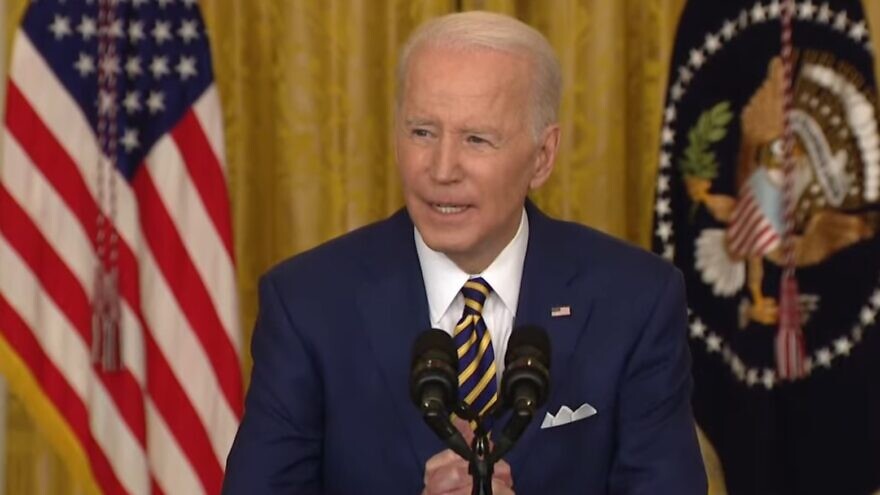 At a press conference on Wednesday afternoon, President Joe Biden assured Ukraine’s Jewish President Volodymyr Zelensky that the US will support him against Russia by comparing the his country’s situation to the war the Maccabees waged against the Greek Seleucids in 167 BCE.

Zelensky and Biden gave a joint press conference in the White House. In his address, President Biden compared the Ukrainian struggle against Russia to the historic Jewish rebellion against the Seleucids that is commemorated in the holiday of Hanukkah.

The meeting marked 300 days since Russia invaded Ukraine. In his speech, Biden emphasized the financial support the US is giving to Ukraine, including $2.2 billion in additional support that brings total US assistance to Ukraine to $15.2 billion since Biden took office in January 2021. The Congress is currently considering a $1.7 trillion omnibus bill that includes $45 billion in aid for Ukraine and NATO allies.

In comparison, the omnibus bill includes $3.8 billion in defense assistance for Israel.

Biden closed his address by noting the current Jewish holiday:

“Tonight is the fourth nights of — night of Hanukkah, a time when Jewish people around the world — President Zelensky and many of the families among them — honor the timeless miracle of a small band of warriors fighting for their values and their freedom against a much larger foe, and how they endured and how they overcame; how the flame of faith, with only enough oil for one day, burned brightly for eight days.”

“A story of survival and resilience that reminds us that the coldest days of the year, that light will always prevail over darkness, and hope drives away despair; and that the human spirit is unconquerable as long as there are good people willing to do what is right.”

On Sunday, Zelensky gave a pre-Hannukah address to his country’s Jewish community.

“Congratulations to the Jewish community of Ukraine and all the Jews of the world on Hanukkah. Those who were outnumbered defeated those who outnumbered them. Light defeated darkness. It will be the same this time,” he said at the end of a longer video update about the status of the war. He finished in Hebrew: “Chag Hanukkah Sameach.”Zelensky chose a different analogy in his address to a joint meeting of Congress later that day. When describing his country’ fight against Russia, he referenced the Battle of the Bulge, President Franklin D. Roosevelt and the Battle of Saratoga. He also compared Putin and Russia to Hitler and the Nazis. Zelensky also said that Iran had allied with Russia, providing drones that were proving especially effective against Ukrainian forces.