War on Christmas and Hanukkah

“Oh, hear in Your heavenly abode and grant all that the foreigner asks You for. Thus all the peoples of the earth will know Your name and revere You, as does Your people Yisrael; and they will recognize that Your name is attached to this House that I have built.”

Home » War on Christmas and Hanukkah 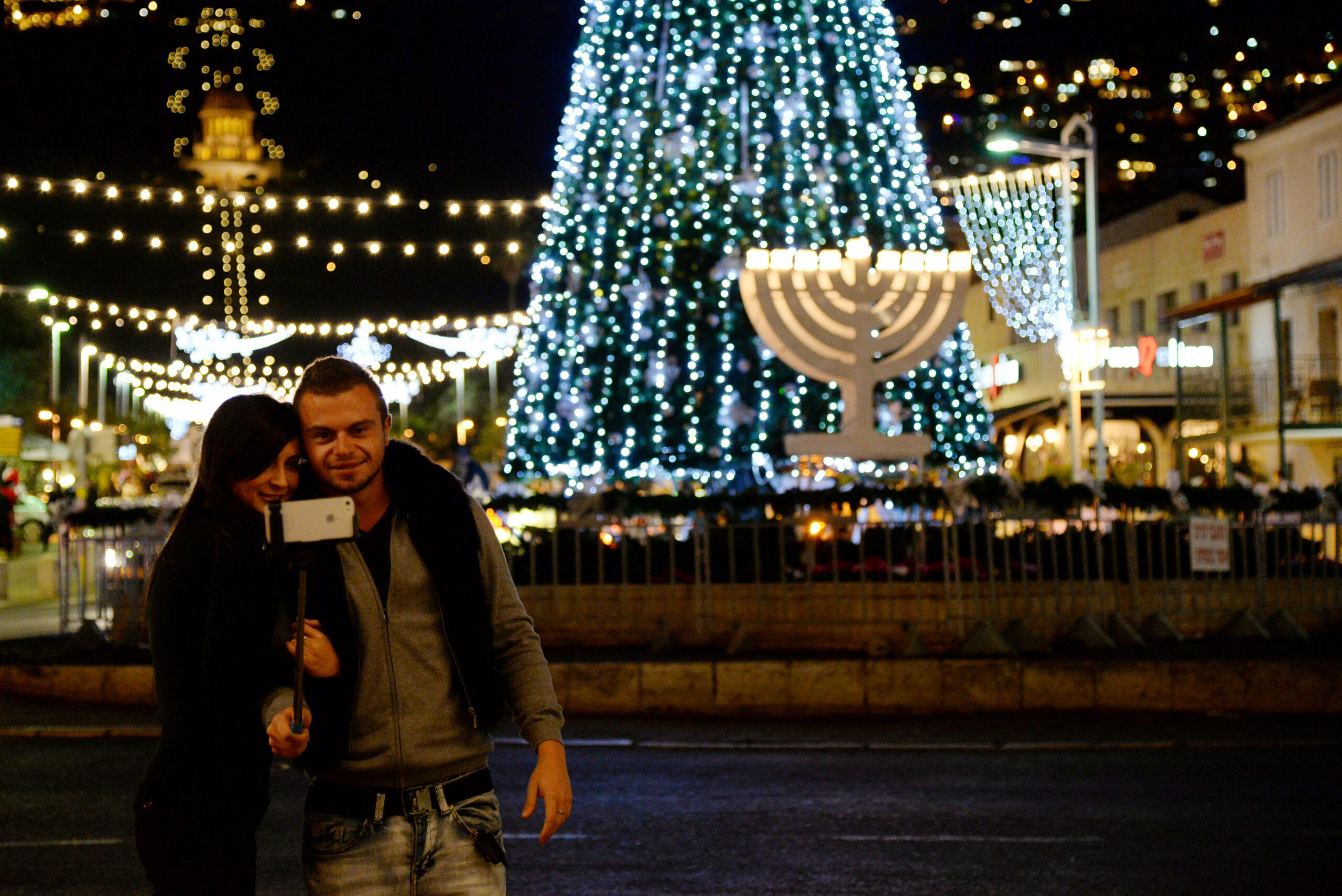 It’s the most wonderful time of the year for Christians and Jews, especially when Christmas and Hanukkah coincide, as they do this season. Jews around the world will celebrate Hanukkah this year from December 18 until December 26th. When I used to live in the United States, the union of the two winter holidays aroused a genuine feeling of appreciation for our common heritage and shared values. Now that I live in Israel, however, those tidings of comfort and joy have been overshadowed by a particularly vile ‘War on Christmas and Hanukkah’ that is exceedingly offensive to members of both faiths.

Since its inception in 1948, the Jewish State of Israel has gone to great lengths to show proper respect for its Christian citizens and is the one country in the Middle East where Christians are not persecuted. Tourists to Bethlehem, however, experience a frightful encounter in the city where Jesus was born, since the Palestinian Authority has controlled the area ever since the Oslo Accords in 1995.

Christian visitors to Bethlehem are confronted repeatedly with the false message that Jesus was not a Jew, but a Palestinian Arab. Palestinians and their antisemitic enablers sponsor slick PR gimmicks like “Christ at the Checkpoint” that absurdly claims that Jesus was Palestinian and so if he were alive today, he would be persecuted by Jewish soldiers at Israeli security checkpoints. This perverse form of Cancel Culture goes back to Yassar Arafat, who claimed that Jesus was an Islamic militant! Such revisionist history uproots the very source of Christianity and is completely ridiculous as even history’s most notorious antisemites acknowledged Jesus’ Jewish identity.

In the 1930s and 1940s the Nazis waged their own War on Christmas and tried to reinterpret the holiday, precisely because they were so hostile to the Jewishness of Jesus. Even Hitler could not have imagined denying that Jesus was a Jew and so he tried rewriting lyrics to Christmas carols, encouraged mothers to bake swastika-shaped cookies, and tried inserting pagan, Aryan symbols into the holiday.

Despite Palestinian claims to the contrary, Christmas celebrates the birth of a Jew two millennia ago in the Judean town of Bethlehem. Accordingly, the only winter holiday Jesus and his Jewish parents Mary and Joseph would have celebrated would have been Hanukkah! The New Testament in fact mentions (John 10:22) that Jesus went to the Temple in Jerusalem to celebrate the Jewish holiday of Hanukkah.

A brief understanding of Hanukkah is therefore in order to provide Christians with a deeper appreciation of their own faith and to be able to respond to the increasingly egregious attempts to rewrite history.

Hanukah commemorates an event that took place in Israel two centuries before Jesus when Judea was under Greek occupation. To unify his empire, King Antiochus IV, who reigned over Jerusalem from 215 to 174 BCE, forced his subjects to renounce their religions and abandon their cultures. In his brutal effort to eradicate the Jewish faith, Antiochus prohibited Torah study and the observance of cherished rituals such as Sabbath and Kosher under strict penalty of death. The ruthless king removed the Jewish high priest from his position and defiled the Temple in Jerusalem by erecting Greek idols there.

Under this crushing religious persecution, a small band of Jewish rebels – led by Matityahu and his son Judah – united in a fight against the mighty Greek army and in defense of the God of Israel. Judah was referred to as a ‘Maccabee’ which is an acronym for the Hebrew phrase ‘Mi Kamocha Ba’eilim Hashem’ – “Who is like you, O God” – because Judah was committed to fighting for his God, even if it meant sacrificing his own life.

When King Antiochus learned about the rebellious Maccabees, he sent a large military force to wipe them out. Though the king’s army vastly outnumbered the Maccabees in numbers and weapons, the small group of freedom fighters defeated their powerful adversary and liberated Jerusalem from foreign occupation. The Maccabees entered the Temple, cleared it of idols, and rededicated it in 139 BCE. Upon entering the Temple, the Maccabees found only enough pure olive oil to rekindle the golden menorah for one day. Yet, by a miracle of God, the oil burned for eight days.

As such, at the heart of the Hanukkah celebration is the eight-night candle-lighting ceremony, during which Jews recite special blessings of praise and thanksgiving. While the holiday is widely known as the Festival of Lights, it is really the Festival of Miracles, commemorating in the words of one Hebrew prayer, “the wonders He performed for us in those days and in ours.”

Indeed, the modern return of the People of Israel to the Land of Israel in the 20th century was also a victory of a small number of Jews over a much larger enemy force. On May 14, 1948, Israel’s first Prime Minister David Ben-Gurion declared independence of the newly birthed State of Israel, which was immediately attacked by eight well trained and well-armed Arab nations. Miraculously, the baby country with only 600,000 citizens, many of whom were survivors of the Nazi Holocaust, held on and defeated their much stronger attackers.

Two decades later, the neighboring Arab countries tried again to wipe Israel off the map and push the Jews into the Mediterranean Sea. In 1967, against seemingly insurmountable opposition, Israel likewise persevered in battle, tripling its territory and reuniting Jerusalem under Jewish sovereignty – for the first time since the Maccabees controlled the city – in the miraculous Six-Day War.

It’s no wonder that Prime Minister Ben-Gurion reflected upon the Jewish State and remarked, “In Israel, in order to be a realist, you must believe in miracles.”

And the miracles continue.

Today, the Jews have returned to their ancient and everlasting homeland. The once desolate soil of the area that used to be known as Palestine is lush and fertile once again, and Israel is a world leader in innovation and entrepreneurship. One almost has to contrive willful blindness not to see the miracles of Biblical proportions that God has performed for Israel over the last century. This is why, after centuries of persecution and antisemitism, so many Christians are now standing with the Jewish People and supporting Israel.

Millions of American Christians are overwhelmingly pro-Israel for they recognize the success of the Jewish State as the fulfillment of biblical prophecy and appreciate the shared Judeo-Christian values that bind America and Israel together. Many Christians are so moved by Israel’s powerful story that they are eager to explore the Jewish roots of their own faith, which is why so many Christians are interested in visiting Israel, studying Hebrew, and incorporating Jewish customs into their own religious practices. As such, the ancient Jewish lessons of faith and freedom on Hanukah are particularly relevant to Christians today.

Hanukah commemorates the ancient Jews’ stubborn loyalty to their God and their land despite efforts by strong forces preventing them from practicing their faith. God rewarded the Jewish nation for their dedication by performing miracles on their behalf, which we remember by lighting the Menorah.

When Christmas and Hanukkah share a date, it’s an opportunity for Christians and Jews to celebrate our shared history, our common origins in this region, and the values we both hold dear. And while it is true that there are important differences between Jews and Christians and our two holidays, what unites us is far more significant than what divides us. And so, when both of our faith traditions are confronted with the deliberate falsification of history, Christians and Jews must stand together to dispel the darkness by bringing more light and illumination into the world.

Rabbi Tuly Weisz is the founder of Israel365 and the editor of “The Israel Bible,” which are both dedicated to strengthening relationships between Jews and Christians in support of Israel. He can be reached at RabbiTuly@Israel365.com. This article first appeared in Newsmax.