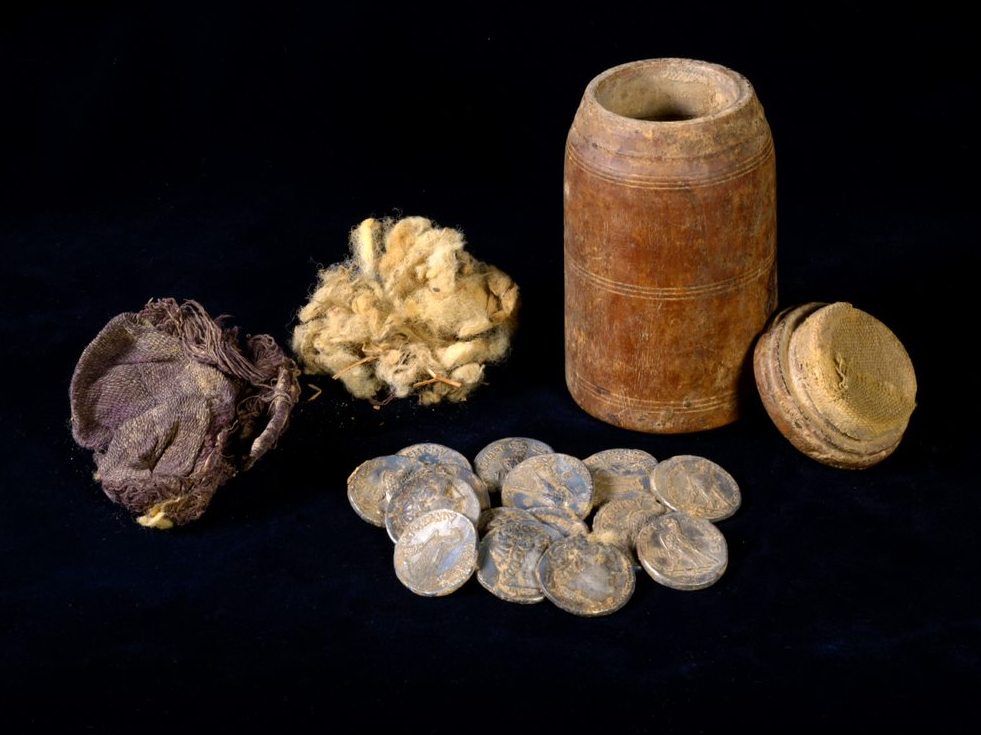 A new discovery by Israeli archaeologists has offered unprecedented historical proof of the history of the Jewish festival of Hanukkah, which will begin on Sunday.

Some 2,200 years ago, someone, likely some Jews fleeing from the war waged against them by Antiochos IV, found shelter in the Judean Desert. The fugitives were carrying a small treasure that they hid in a cave: a cylindrical wooden box full of silver coins. The artifact was unearthed untouched after millennia by Israeli Antiquities Authority (IAA) archaeologists last spring, the IAA announced Tuesday.

“This is an absolutely unique find, presenting the first clear archaeological evidence that the Judean Desert caves played an active role as the stage of the activities of the Jewish rebels or the fugitives in the early days of the Maccabean Revolt, or the events that led up to them,” said Dr. Eitan Klein, who studied the coins together with IAA numismatic expert Dr. Gabriela Bijovsky.

“It is interesting to try to visualize the person who fled to the cave and hid his personal property here intending to return to collect it,” he added. “The person was probably killed in the battles, and he did not return to collect his possessions that awaited almost 2,200 years until we retrieved it.”

The practice of fleeing to the desert is described in the first Book of the Maccabees. The four Books of the Maccabees are not canonized in the Hebrew Bible (Tanakh) but all of them appear in some manuscripts of the Septuagint – the earlier translation of the Bible in Greek.

“Then many who were seeking righteousness and justice went down to the wilderness to dwell there: they, their sons, their wives, and their cattle, because evils pressed heavily upon them,”  reads a passage in the second chapter of the book.

In 167 BCE, Antiochus passed laws banning several Jewish practices and he started a persecution campaign against devout Jews, triggering what became known as the Maccabean Revolt. Refugees and rebels both escaped to the Judean desert, but were often still found and killed by the Seleucid army.

“It was reported to the king’s officers, and to the troops in Jerusalem in the city of David, that men who had rejected the king’s command had gone down to the hiding places in the wilderness,” the Book of the Maccabees further reads. “Many pursued them and overtook them; they encamped opposite them and prepared for battle against them on the sabbath day…. and they died, with their wives and children and cattle, about a thousand persons.”

Eventually, the rebels led by Judah Maccabee managed to defeat the mighty Greeks. Hanukkah celebrates their victory and the rededication of the Temple in Jerusalem, which had been defiled by Antiochos.

The box contained 15 silver coins minted between 176 and 171 BCE. Some of them were tetradrachma coins, minted by Ptolemy VI, a nephew of Antiochos IV, who reigned over Egypt while his uncle was sovereign over the Seleucid Empire, including Judea.

The artifact was discovered in the Muraba‘at Cave in the context of the Judean Desert Excavation and Survey Project run by the IAA and the Archaeological Office for the Military Administration of Judea and Samaria, in cooperation with the Ministry for Jerusalem and Heritage.

Over the past six years, “thousands of archaeological artifacts have been saved from destruction and plundering, including parts of biblical scrolls, arrowheads from the Bar Kochba Revolt, a 10,500-year-old basket, and more,” noted Amir Ganor, Director of the excavation on behalf of the IAA.

The coins and the box will be presented to the public at the Hasmonean Museum in Modi‘in next week.

“The coin hoard that will be exhibited to the public in the framework of the Israel Heritage Week events fires the imagination,” said IAA Director Eli Escusido. “This is the Hannukah ‘gelt’ (money) that the Israel Antiquities Authority is donating to the people and the State of Israel.”