For then I will make the peoples pure of speech, So that they all invoke Hashem by name And serve Him with one accord. 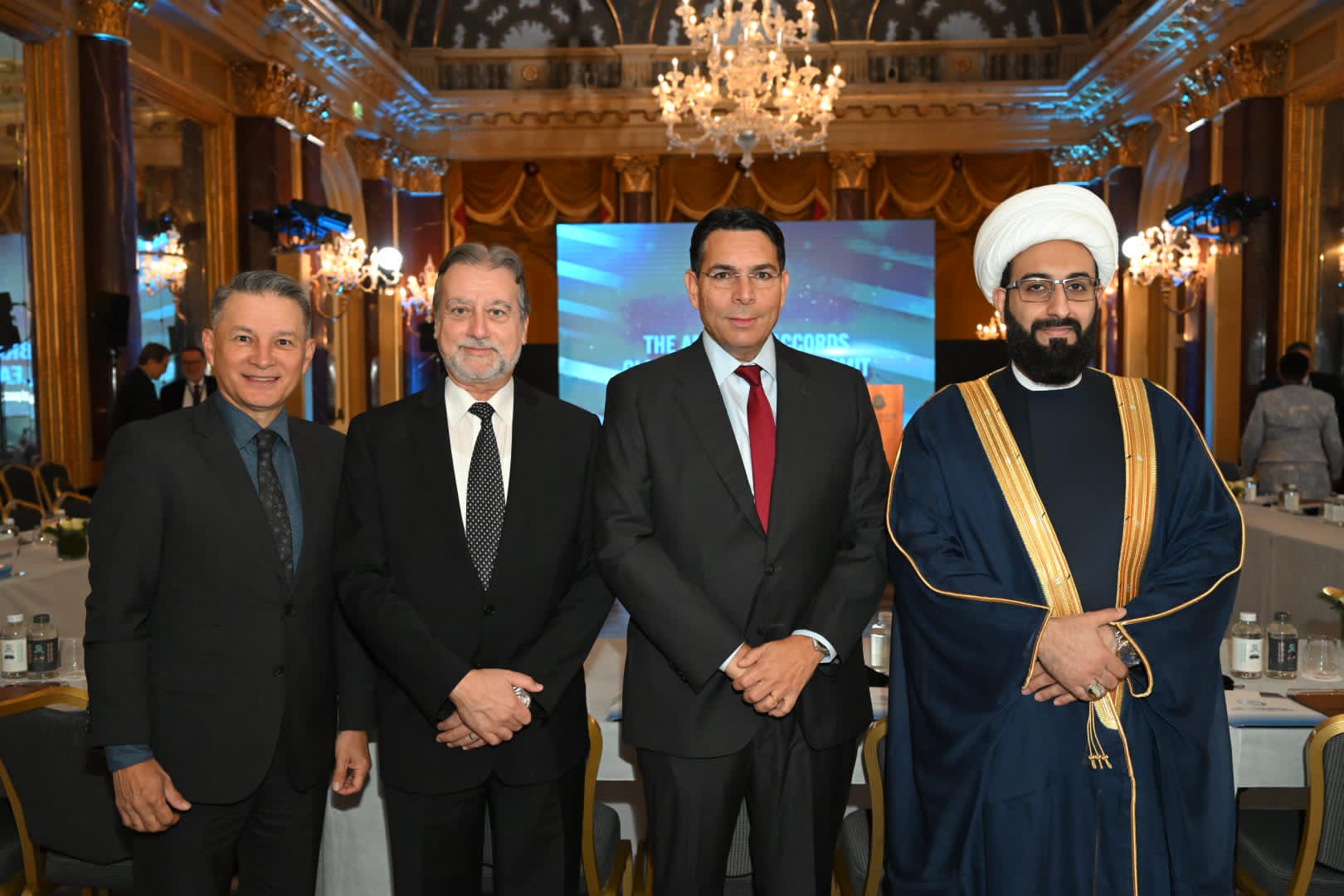 World leaders, ambassadors, diplomats, entrepreneurs, lawmakers, academics, and clergy from over thirty countries converged on Rome this week for the First Annual Abraham Accords Global Leadership Summit, an exclusive invitation-only event focused on new ways to increase peace and tolerance in the spirit of the Abraham Accords.

Ambassador Danny Danon presented an optimistic view of Israel’s recently elected government: “I bring good news from Jerusalem. The new Israeli government‘s first priority will be to increase signatories to the Abraham Accords. Prime Minister Netanyahu’s first state visit will be to Abu Dhabi, and we hope that Riyadh will follow. The Abraham Accords were not built in a day. The hardest part was going public. We have been in contact with the Saudis for years – I worked personally with them at the United Nations on matters of regional stability and security. It’s just a matter of time before courageous leaders step out of the shadows and full peace is achieved between all the children of Abraham. I expect we’ll see an agreement between Israel and Saudi Arabia this year.”

He went on to stress the potential historical impact of the summit: “At the Abraham Accords Global Leadership Summit, dozens of nations came together to work towards peace – with practical measures taken to bring additional countries into the fold – while simultaneously creating bonds across six continents. We pray that the seeds we planted here today will grow into unprecedented global peace and coexistence for generations to come.”

The event celebrated the seismic change that the Abraham Accords have already brought to the Middle East and North Africa in two short years with an emphasis put on how to glean and export the secrets that turned bitter advisories into indispensable allies and friends in such a short time. To this end, delegates from the United Arab Emirates, Bahrain, Morocco, and Israel shared their insights with policy shapers from around the world.

Rabbi Dr. Elie Abadie, Senior Rabbi of the United Arab Emirates also focused on his personal story: “As a young Jewish boy, fleeing my hometown of Beirut, I would have never dreamed that one day I would be serving as a Rabbi in an Arab country. Never mind an Arab country with a rapidly growing Jewish community that has signed a peace accord with the State of Israel. We are living in profound times and must seize the opportunities that lay before us.”.

Imam Mohammad Tawhidi, an Iranian-born Shi’a Muslim Scholar and Vice President of The Global Imams Council predicted that there was a reason for hope beyond the Arab world: “It is hard for some people to imagine that Israel and Iran were close allies just 43 years ago. I come here today, as a free Iranian to tell you that peace between Israel, Iran, and even between the Shi’a and the Sunni world is closer than ever. The people of Iran have seen the fruits of the Abraham Accords, they have witnessed how fast peace can be built and many remember the days of Israeli tourists visiting Tehran and long for those days to return.”

The summit concluded with the presentation of the Abrahamic Values Pledge, a joint declaration where delegates declared their support of shared Abrahamic values and respect to tradition and family. They also confirmed their commitment to further educating their communities about the traditional values that have sustained religions and cultures and allowed them to impact the world positively, particularly emphasizing tolerance, co-existence, and economic peace.

The pledge read as follows:

We are united by our shared Abrahamic values that have sustained our societies for
thousands of years. We take immense pride in our mutual responsibility for one another.
While our shared humanity is constantly challenged by trends that question the traditional
values shared by all Abrahamic religions, our deep-rooted heritage has enabled us to build
a vibrant and well-knit society that is both entrepreneurial and innovative in its nature.
The spirit of the Abraham Accords has allowed our communities to reap the fruits of peace
and flourish in an ever-evolving socio-economic environment and has underscored the
importance of the following foundational pillars:
-Tolerance, Coexistence & Diversity
-Religion and Family
-Economic Peace
We agree to promote these pillars and bring them proactively to our communities in the
spheres of academia, governance, and community.
The Abraham Accords Global Leadership Summit values economic peace as a vehicle to
promote open markets, contributing to more peaceful behavior among states. Economic
peace has traditionally assisted in developing market-oriented economies that seek
increased collaboration with one another.
Our commitment to the central role of our tradition forms the cornerstone of our societies
and connects us as we recognize our shared past and build our common future. We
celebrate the traditional family values that have sustained and allowed religions and
cultures to impact the world in a positive way that has resulted in a commitment to a
strong sense of humanity, tolerance, and coexistence.
We hereby commit to take responsibility to further educate our communities in the
fundamental significance of the traditional Abrahamic values, and the importance of our
shared humanity that has flourished for thousands of years.