In that day, I will make Yerushalayim a stone for all the peoples to lift; all who lift it shall injure themselves. 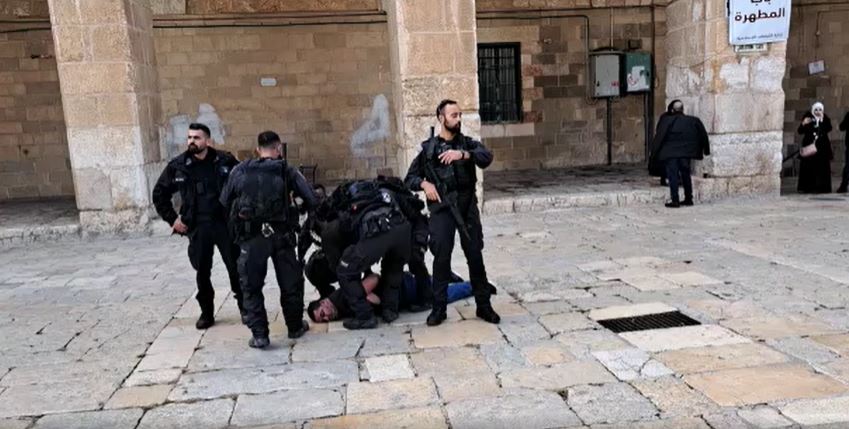 An Arab attacked a Jew who ascended to the Temple Mount on Tuesday afternoon. According to the victim, he was walking slightly behind a group of Jewish visitors to the site when an Arab attacked him from behind and broke his glasses. The Arab was wrestled to the ground and was arrested by the police.

“I stood a little further away from the rest when I noticed the Arab approaching,” the victim told Beyadenu, a Temple Mount activist organization. “I signaled to the policemen to watch him but while I was signaling, I felt someone coming up behind me, grab at me, and trying to strangle me. I fell to the ground and managed to get away, thank God. My glasses were broken and my shirt was torn. The policemen ran to him and took control of him.”

Roi Zaga, a guide for Beyadenu who accompanied the group, said, “We were in the western part of the mountain. Suddenly I saw the policemen running. I turned around and saw them taking control of an Arab man. One of the Jewish visitors stood next to them, visibly upset. His glasses were broken and his shirt was torn.”

Tom Nisani, CEO of the Beyadenu organization, responded in a statement.

“The Arabs roam freely on the Temple Mount as compared to the groups of Jews who are restricted in every way,” Nisani said. “This encourages the Arabs to feel like they own the Temple Mount and can act as they wish. There must be a change in the attitude of the Israeli government to the Temple Mount in order to prevent such incidents. Our compliments and gratitude to the policemen who responded quickly. It must be ensured that the terrorist will now go to prison for a long time.”

Nisani also noted that on Monday, a group of Arabs taunted Jewish visitors to the Temple Mount with cries of, “Khaybar, Khaybar, ya Yahud.” This is an antisemitic chant used by Muslims to intimidate Jews.

Khaybar is a historic Arabian oasis north of Medina in present-day Saudi Arabia that is religiously significant for Islamic history. This slogan recalls a series of seventh-century battles between Mohammed and local Jews during the first few years of Islam’s establishment.  As retold in the Quran and other textual sources, Mohammed’s forces took action against Khaybar in response to purported acts of Jewish treachery. Ultimately, these battles resulted in the subjugation, mass expulsion, or slaughter of the area’s tribal Jewish communities.

“Invoking this slogan today at such a demonstration problematically shifts the complex Israeli-Palestinian conflict into a religious battle between Islam and Judaism. Moreover, in celebrating a past military defeat of Jews, this chant can be perceived as a threat of armed violence or forcible expulsion against Jews today.”