And this stone, which I have set up as a pillar, shall be Hashem's abode; and of all that You give me, I will set aside a tithe for You.” 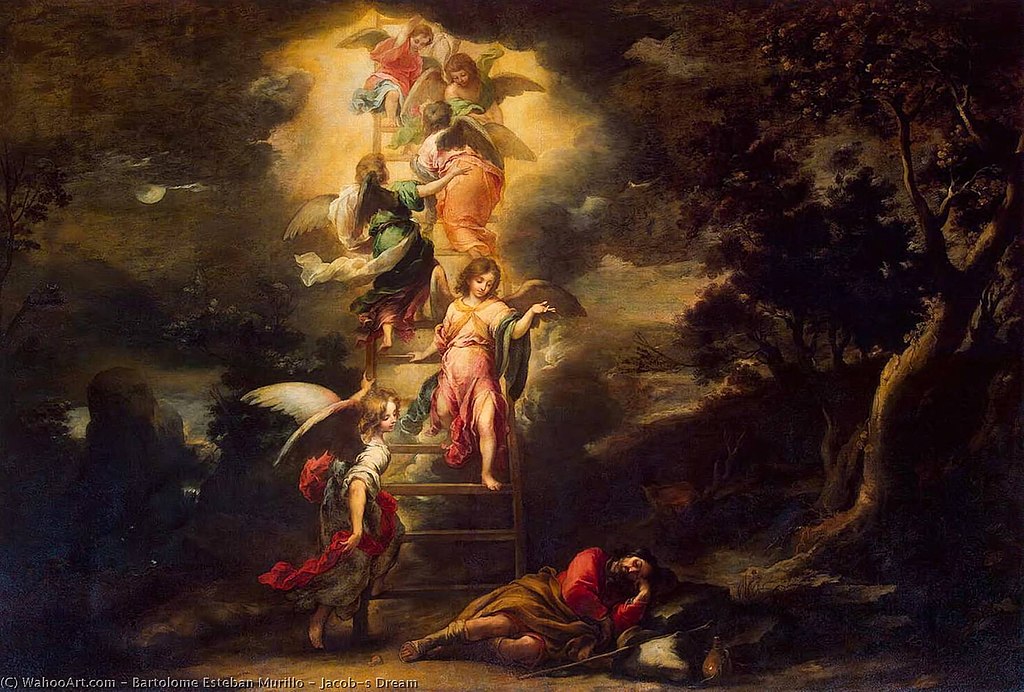 At the beginning of this week’s Torah portion, Vayetze, we find Jacob on the run. He left home in the wake of the events surrounding his acquisition of his father’s blessings. Jacob’s brother Esau vowed to kill Jacob after the death of their father Isaac. At their mother Rebekah’s behest, Jacob left home for the home of Laban, Rebekah’s brother.

Traveling alone, Jacob stopped for the night and had a dream. In his dream, Jacob saw the famous vision of a ladder to heaven with angels ascending and descending on it. In the dream, God promised to protect Jacob on his journey.

And Hashem was standing beside him and He said, “I am Hashem, the God of your father Avraham and the God of Yitzchak: the ground on which you are lying I will assign to you and to your offspring. Your descendants shall be as the dust of the earth; you shall spread out to the west and to the east, to the north and to the south. All the families of the earth shall bless themselves by you and your descendants. Remember, I am with you: I will protect you wherever you go and will bring you back to this land. I will not leave you until I have done what I have promised you.”– Genesis 28:13-15

Early the next morning, when Jacob awoke, he made a vow to God.

Yaakov then made a vow, saying, “If Hashem remains with me, if He protects me on this journey that I am making, and gives me bread to eat and clothing to wear, and if I return safe to my father’s house—Hashem shall be my God. And this stone, which I have set up as a pillar, shall be Hashem’s abode; and of all that You give me, I will set aside a tithe for You.”– Genesis 28:20-22

Why did Jacob make this vow? Why did Jacob say, “If God will be with me and will watch over me on this journey,”? Didn’t we just read a few verses earlier that God promised that He would protect Jacob on this journey and that He would bring him back to the land? Why is Jacob now making a vow, as if he needs a guarantee from God that He will keep His word? It appears that Jacob is not confident in God’s promise of protection. Otherwise, what’s the point of the vow?

On the other hand, if God’s promise to Jacob was unconditional, as the text appears to say, what was the point of Jacob’s vow? Was it merely Jacob’s humility, thinking that maybe he could still lose a promise from God, even though God did not state any condition?

To answer this question, let’s ask another question. Do we have the power to undo God’s plan for the world? You’re probably thinking, “Of course not!” But it’s not so simple. Take, for example, the current state of the Jewish people in the land of Israel in our times. The millions of Jews ingathered from the four corners of the earth are a clear fulfillment of Biblical prophecy. Over and over, the Bible foretells a time in the future when, after a lengthy exile, the Jewish people will return to our homeland, take possession of it, and become, in the words of Deuteronomy 30, “more numerous and more prosperous” than our ancestors. These are God’s promises that have come true.

Now, none of the millions of Jews in Israel are forced to remain here. Any citizen of Israel has the free will to pick up and leave. In fact, there are today many Israeli citizens who have moved to other countries. Imagine for a moment that every single Jew in the current state of Israel were to decide to pick up and move to another country. Is there anything preventing this? Can we use our free will to undo the promises of God? What would happen to the Biblical prophecies of the ingathering of the exiles?

The answer is that God would find another way for his promises to be fulfilled. God does not stand in the way of our freedom to choose on an individual basis. If a given Jew chooses to leave the land and thereby chooses not to participate in the fulfillment of Biblical prophecy, God will not stand in that person’s way. Think of God as a master chess player. He will undoubtedly win the game. But which exact moves He makes along the way will be a response to our choices. He will find a way to maneuver the situation so that His will is done, despite our choices.

I’d like to suggest that this is how we ought to understand Jacob’s vow, as well as the traditional rabbinic interpretation I mentioned above. When the rabbis suggested that Jacob was concerned that perhaps his own sinfulness would prevent God’s promise from being fulfilled, he meant it. He was worried that he would acclimate himself to the sinful society that he was heading to. He feared that once acclimated, he would choose to remain there, worshipping the local gods, and never return to the land of his fathers.

“But what about God’s promise?” you may ask. God would find a way to fulfill it with or without Jacob. Perhaps Jacob’s repentant offspring would return at a later date, fulfilling God’s promise to “bring you back to this land.” Regardless of such hypothetical speculation, the point is that while the fulfillment of God’s promises is certain, the manner of their fulfillment is impacted by the choices we make.

And therein lies the purpose of Jacob’s vow. As we explained, the manner of fulfillment of God’s promises is a combination of God’s unerring and certain word and our choice to participate in the fulfillment. Jacob had no doubt in the certainty of God’s promise. With his vow, Jacob committed himself to uphold his own end of the bargain.

The lesson for us is powerful. Although as people of Biblical faith, we know that God’s plan for the world will be done, we can choose to help bring that plan to fruition, or to sit on the sidelines and watch someone else make it happen. The partnership between God and those who serve Him calls upon us to be active participants, aligning ourselves with God’s promises and thus meriting to play a part in their fulfillment.

Vayigash – Seeking the Comfort of Exile