Home » Heroes of Judea and Samaria: The man who saved Efrat’s hills 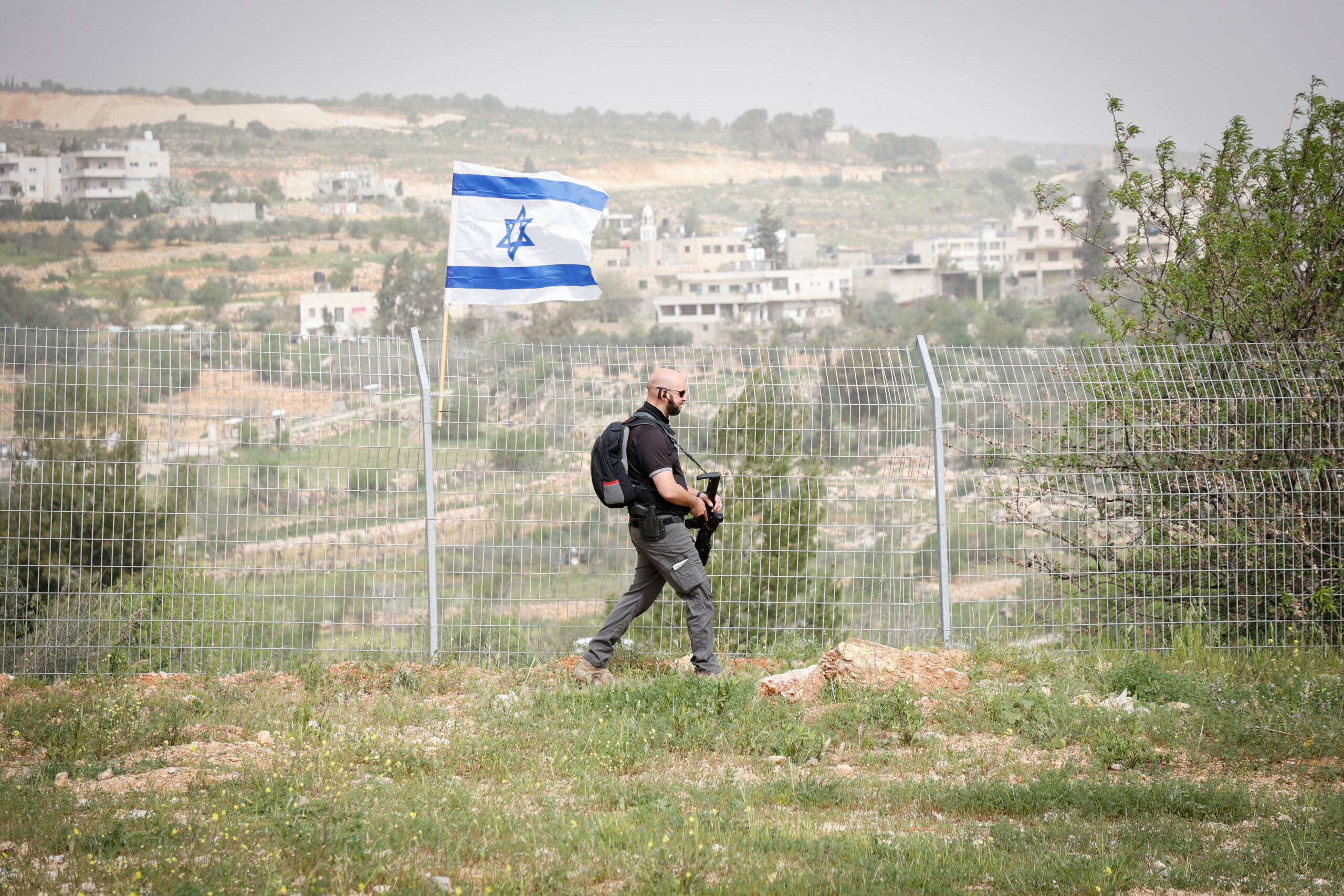 Born and raised in Brooklyn, New York, Josh Adler was just seventeen when he decided to leave a comfortable American life for Israel, then a slowly developing country.

His grandparents came from Germany, but were not Holocaust survivors, having emigrated to America just before the first window of the 1938 Kristallnacht pogrom was smashed. Adler credits the foresight of his grandparents to their admiration of the Beitar movement. Beitar was founded in 1923 in Riga, Latvia, by Vladimir Jabotinsky, one of the great Zionist leaders of the early twentieth century. Chapters sprang up across Europe, even during World War Two. Josh’s identity as a proud Zionist Jew was shaped as a child, by hearing the stories about the brave fighters of British Mandate era Jewish underground organizations like Lechi and the Irgun Zevai Leumi, which was closely affiliated with the Beitar movement.

Josh’s parents settled in Brooklyn, where his father worked in the diamond industry. Adler had no interest in inheriting his father’s business, which he admits to lacking the patience for. Growing up in the sixties, rebellion against “the system” was in the air, but Josh’s rebellion took a form different from most young people at the time. He became an active member of the Jewish Defense League (JDL), whose mission was to “protect Jews from antisemitism by whatever means necessary.”

The JDL was founded by the late Rabbi Meir Kahane, who eventually moved to Israel and became a member of the Knesset, before his party was banned from it due to its racist positions. Kahane was assassinated in 1990.

Through the decades of the Soviet Union’s Iron Curtain, when few Jews were allowed to leave the USSR, the JDL would disrupt virtually any effort by the Kremlin to normalize relations with Washington. Adler was “deep” in the organization, whose activists were wiretapped and often arrested by the FBI. Hearing rumors that he was on the FBI’s list – at just seventeen years old – he skipped his high school graduation and booked a one-way ticket to Israel.

Not knowing what to do upon arrival, he joined a Israel tour program for college students through the Yavneh organization and soon fell in love with the country. Adler formally made Aliyah and joined the IDF in 1977.

In 1978, President Jimmy Carter, Egyptian President Anwar Sadat, and Israeli Prime Minister Menachem Begin signed the Camp David Accords, establishing a framework for a peace treaty between Jerusalem and Cairo. Under the terms of the agreement, Israel would return the Sinai Peninsula that it had captured from Egypt during the Six-Day War. Incredibly, Israel agreed to hand over control of the strategic Suez Canal and an area rich in oil and resources to a country that had tried to annihilate it only a few years earlier.

In a New York Times interview dated October 19, 1980, Sadat boasted: “Poor Menachem, he has his problems … After all, I got back … the Sinai and the Alma oil fields, and what has Menachem got? A piece of paper.”

Deeply upset by the Camp David Accords, Adler believed that giving Sinai back to Israel’s enemies was a recipe for disaster. Together with other activists, he helped build a makeshift village in the Sinai Peninsula called Chatzar Adar. For months, they camped out in the Sinai Desert without electricity or running water in a fruitless effort to prevent its handover to Egypt. Adler describes life in an aluminum shack in the middle of the desert: “During the day, you would bake, and at night you’d freeze,” he said with a nostalgic smirk. The IDF eventually destroyed his tent village, but that didn’t deter him. He moved to Yamit, the leading settlement in the Israeli-controlled Sinai Peninsula and the last one to be destroyed and evacuated.

Adler, now a father of six with ten grandchildren, recalls standing on the rooftops of Yamit as the army tried various techniques to remove the protesters, including spraying foam on the roof to make it slippery. He still wouldn’t budge.

Eventually, he and his rag-tag group of activists couldn’t hold the line against the military any longer. Refusing to respond with violence, they were evacuated, and tearfully watched the demolition of Yamit as they were helplessly carried off by Israeli troops, many of whom risked their lives a little over a decade earlier to liberate that very land.

Although the Israeli government won this battle, Adler would soon have a bigger war to fight to protect the land God promised to the Jewish people.

There and Back Again

Adler, a small-framed man with a salt and pepper beard and ponytail, recalls how he finally mustered up the funds to purchase a home in Israel. Forced to return to America in 1984 as Israel was coping with hyperinflation and a severe economic crisis, he struggled to find work to support his family, lacking any practical education or training. Returning to New York City, he eventually found his footing and ran a successful photo store. But as King David said in Psalm 137, Adler never forgot Jerusalem.

On December 6, 1987, an Israeli was stabbed to death as he was shopping in the Gaza Strip. The next day, four Arabs in Gaza’s Jabalya refugee camp were killed in a traffic accident. Rumors began to spread among the Gazans that the four victims were killed by Israelis as a revenge attack. On the morning of December 9, mass rioting erupted in Jabalya, where an IDF soldier killed a 17-year-old rioter who threw a firebomb at an army patrol. This event ignited a wave of violent rioting that engulfed Judea, Samaria, Gaza, and Jerusalem for the next six years and which came to be known as the First Intifada.

Following the tumult closely from New York, Adler didn’t feel comfortable making money in America as his brethren in Jerusalem were suffering. He packed his bags, and together with his wife Marilyn and their two young children, Michaella and Aharon, they were soon on a flight back to Israel, where he knew he belonged.

He moved with his young family to a small village called Efrat, established only a few years earlier in the Judean hills just south of Bethlehem. Now a bustling town of over 14,000 residents, the Adlers were one of the first few hundred families to move there. The family settled down, hoping for peace and quiet. But it was not to be, for soon after their move the infamous Oslo Accords were signed.

The  Oslo Accords was a set of two separate agreements signed by the Israeli government and Yasser Arafat, the leader of the Palestine Liberation Organization (PLO). In theory, it was meant to forge peace between the Israelis and Arabs following the bloody years of the First Intifada. In reality, it enabled the PLO to freely obtain dangerous weapons they could previously only dream of. In retrospect, that historic agreement is viewed by many as a naive and catastrophic failure responsible for the murders of over one-thousand Israeli civilians, with scores more injured.

A threat to the Jewish communities of Judea and Samaria, the Oslo Accords required Israel to hand over control of large swaths of land in the Biblical heartland to a new entity called the ‘Palestinian Authority.’

Among the land slated to be handed over to the Palestinians were the Zayit, Tamar, and Dagan hilltops, hills originally slated to be part of the Israeli settlement of Efrat. These hills were not only rich with Biblical history, but also strategically critical to the protection of the rest of Efrat. According to many, giving those hills to the Palestinians would endanger the town’s 300 families.

Recognizing the danger, local activists Nadia Matar, Marilyn Adler, Eve Harow, Shimon Einstein and Sharon Katz decided to take matters into their own hands, with Adler playing a key role as the planner and recruiter. Learning from his experiences in the Sinai desert over a decade earlier, Adler helped the team outsmart the Israeli Army. In the dead of night, they fearlessly snuck mobile homes onto the empty hilltops of Zayit, Tamar, and Dagan for Israelis to live in – immediately creating facts on the ground. Despite pressure from the IDF and the local Arabs, and poor roads, Adler and his friends worked with Efrat council member Dudi Kochmeister to set up shanty villages on each hilltop. With tremendous dedication and sacrifice, they overcame Israeli, Arab, and international opposition, saving these hills for the Jewish people.

Today, these hilltops are thriving neighborhoods of bustling Efrat, home to close to two thousand Jewish families. Adler himself lives in an elevated home on the Zayit hilltop with a commanding view of the entire area, a daily reminder of the importance of the hills he and his friends fought for.

Despite his numerous confrontations with the army and government, Adler remains loyal to the State of Israel. Throughout all of his struggles, he “never laid a hand on a soldier.”

The chosen people remain strongly rooted in the holy land, thanks to Josh Adler – and the thousands of other humble heroes like him.