Though I walk through a valley of deepest darkness, I fear no harm, for You are with me; Your rod and Your staff—they comfort me. 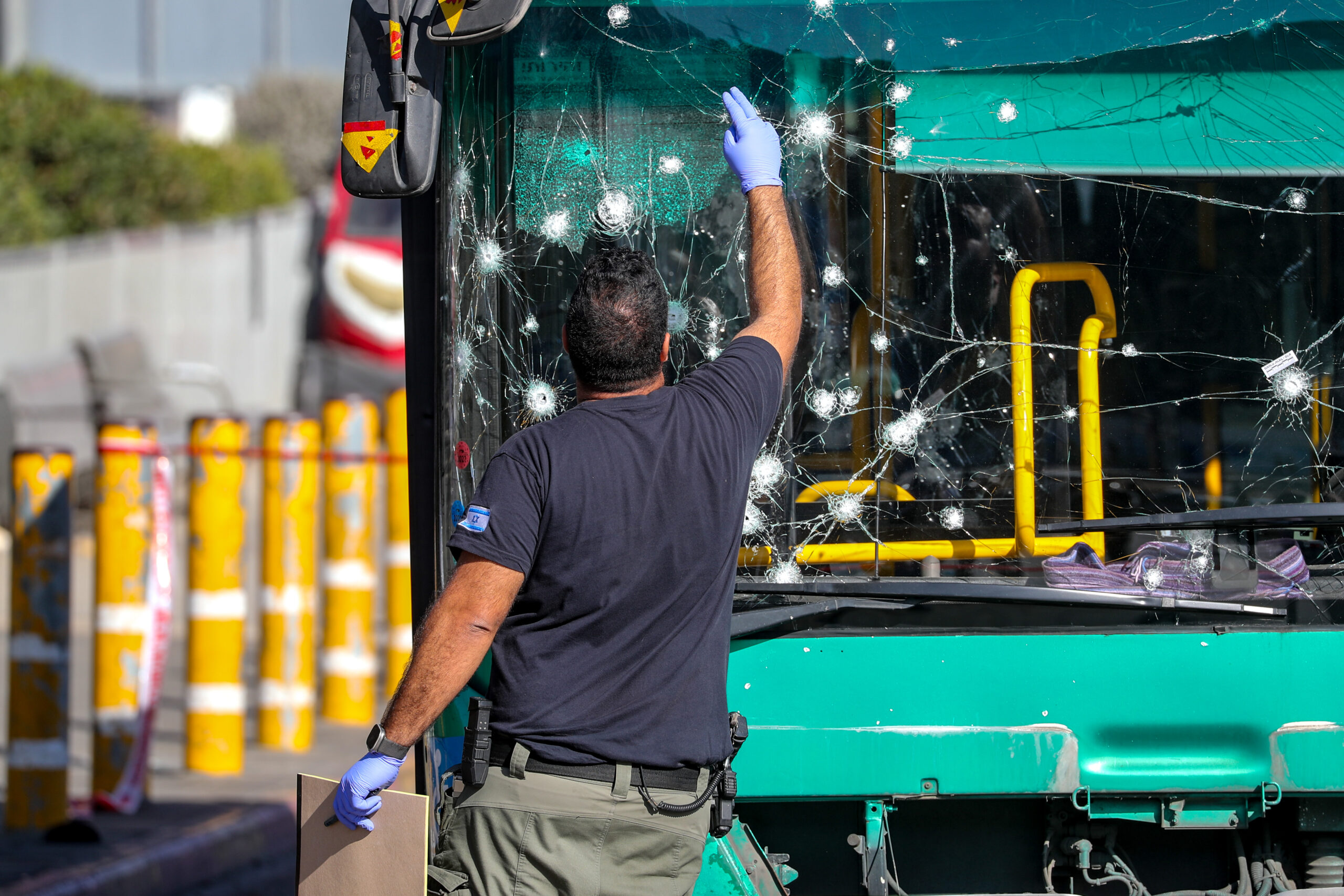 Rivka Lev was riding the 14 bus in Jerusalem when a suicide bomber dressed as a Hasidic Jew detonated an explosive vest in 2003. Known as the Davidka Square bus bombing, 17 people were killed in the attack and over 100 people were injured. Hamas claimed responsibility for the attack.

“The terrorist sat three rows from me,” Rivka said. “People all around me were killed. The bomb was full of ball bearings and nails. Some people were left sitting in their place with only a small wound. But they were killed.”

As a double bombing attack in Jerusalem killed a 16-year-old boy and wounded 20 other people on Wednesday, many survivors of terror attacks find themselves relieving painful memories.

The attack also marked the first bus bombing in 28 years, leaving many Israelis concerned that this may signal a return to the worst days of the intifadas.

The first bombing targeting public transportation in Israel was in 1994 and there have been countless bombing attacks since then with countless victims. The last bus bombing was in April 2016 in Jerusalem. Each of these attacks leaves an indelible scar on the soul of Israel. Israelis bear the nickname’Sabra’, comparing them to the prickly cactus fruit. But Israelis feel the pain, bearing memories of events no human should have to experience.

“I no longer listen to the news,” Rivka said. “But I heard about the attack this morning from a friend. I frequent that bus stop so it was hard for me to hear about it. This is our neighborhood and it is the holy city of Jerusalem.”

Rivka still has terror attacks from the bombing she survived.

“At first, I wasn’t sure that I was alive but through Divine intervention, I walked out of the bus with only light wounds,” Rivka said. “Perhaps because I was reading Psalms. But it is impossible to know why God spares one person and takes another.”

Living through the attack has strengthened her faith in God and left her with a clear message.

“I pray that God will bring Redemption in kindness very soon, that we should all turn to God now,” she said. “We need to strengthen ourselves in having faith in God, knowing that he loves us.”

In 2000, Chana Ferency was 19 years old and learning to be a nurse. Her ambition was to work in the emergency room. Chana grew up in Gush Etzion so she was familiar with terrorism but had never experienced it firsthand.

Soon after she began her studies at Shaarei Tzedek hospital in Jerusalem, the second intifada began. She could not know that in that year before she even received her certification, there would be no less than 47 mass attacks in Israel, many of them bus bombings.

“We were constantly on call,” Chana told Israel365. “Day and night, if we weren’t on duty, we were called in. There would be no explanation but we knew what was waiting for us in the emergency room. Even the office workers in the hospital had jobs to do in a mass attack.”

The nurse described the emotional toll that treating the victims of terror attacks took from healthcare workers.

“We were all trained in what to do and there was someone in charge but walking into the ward was a shock,” she recalled. Just under the surface was chaos. Sometimes, it was full-blown chaos despite all the training. Inside, I was emotional but on the outside, I had to act like I felt nothing. I did my job.”

In 2017, a truck driven by an Arab plowed into a group of soldiers, killing four and injuring 15. One victim stands out in Chana’s memory.

“I don’t remember why he was special but I still remember his name and his face,” Chana said. “After he died, we found out that he didn’t have a family so the entire emergency room staff went to the funeral.”

Chana preferred not to name the soldier.

When she heard of the explosions this morning, old memories returned.

“My first thoughts are not necessarily for the victims,” Chana said. “Of course, I pray for them. But because of my experiences, my first thoughts are for the staff in the hospital. These horrific attacks affect so many people. Every person that is killed or injured, of course. Some of these injuries affect the victim for life. But even the people who escape unharmed have to cope with what they witnessed. And all of the families have to cope with a member who has been traumatized.”

In 2019, Kay Wilson was on a hike with her friend, Kristen Luken, a Christian tourist, in the hills of Jerusalem. They were attacked by two Palestinian men. Luken was murdered. Wilson, who has since changed her name to Tal Hartuv (dew on the good mountain), was stabbed 13 times but survived.

“After surviving violence, you become sensitized,” Hartuv told Israel365. ”When I hear of an attack, I don’t think about politics. It is clear that we are already in the midst of an intifada. There have been so many attacks recently that are just glossed over because people have become desensitized by the media.”

In response to being attacked, Hartuv wrote a book about her recovery titled “The Rage Less Travelled”.

“Every victim, every witness, represents a story of recovery,” she said. “Not all of them succeed. The death of others is not ours to view. Watching death desensitizes us and scars us for life. Violence violates both the victim and the spectator.”

Hartuv has dedicated herself to anti-terrorism advocacy and peace advocacy, choosing life over continued violence.

“Death reminds us that we are here for a limited and unknown amount of time, in which we must act for the good of others,” she said. “I’ve seen death. I’ve seen it live and in slow motion- and not on Facebook. And unlike my body, these are scars that will never heal. Seeing the death of others deals us a fatal blow.”

David Rubin is a survivor of a terrorist attack and his son was also a victim of terrorism. In 2001, while driving home from Jerusalem, Rubin’s car was ambushed by three Fatah terrorists and he was shot in the leg by a gunman with an AK-47 assault rifle. Rubin’s three-year-old son was shot in the head causing a skull fracture and internal bleeding in the cerebellum. The bullet missed his brain stem by one millimeter and he survived.

Rubin said that he and his son were transformed by the experience and wanted to build something positive after the event. In 2004, Rubin established the Shiloh Israel Children’s Fund in order to help children recover from trauma. The organization supports therapeutic, educational, and recreational programs.

“Thank God, my son is physically okay now,” Rubin said. “But he is still dealing with the experience emotionally to this day.”

Rubin said that he and his son were transformed by the experience and wanted to build something positive after the event. In 2004, Rubin established the Shiloh Israel Children’s Fund in order to help children recover from trauma. The organization supports therapeutic, educational, and recreational programs.

“We saw so many people coping with the after effects,” Rubin said. “But children in Judea and Samaria have suffered disproportionately from terrorism.”

Rubin noted that the bombing this morning was inevitable.

“There have been so many shooting attacks that have gone unnoticed and under the media’s radar,” Rubin said. “A bus bombing is horrific but there is barely a reaction outside of Israel. It’s just considered par for the course.”