What does the Bible tell us about sinkholes in Israel?

And the earth opened her mouth and swallowed them up, and their households, and all the men that appertained unto Korach, and all their goods.

Home » What does the Bible tell us about sinkholes in Israel? 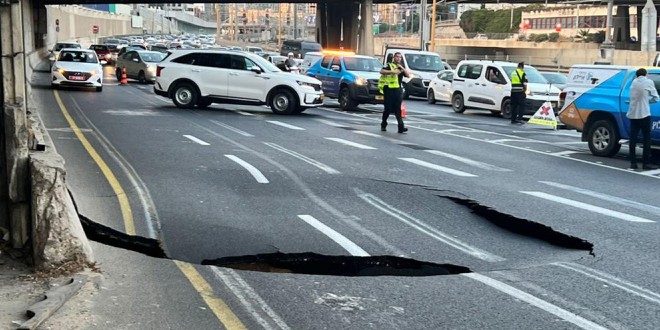 The sudden appearance of the earth opening underfoot is a Biblical image, even more so when it happens in Israel. On Monday morning, a sinkhole opened up in a subterranean parking lot in Hod Hasharon in central Israel, forcing the evacuation of three apartment buildings.

No injuries were reported and the buildings remain standing. Engineers determined that several walls necessary to support the structure had been removed, leaving the complex in danger of collapse.

Last year, a massive sinkhole opened up in the parking lot of Shaare Zedek Medical Center in Jerusalem. Several cars were swallowed up, but no people were injured in the incident.

A sinkhole is prominently featured in the Torah portion of Korach. The portion contains the Biblical account of a rebellious congregation being swallowed up by a sinkhole after challenging the leadership of Moses and Aaron.

In the story of Korach, sinkholes are the result of a challenge to Moses as leader of the Jewish people.

According to Jewish tradition, Korach and his followers did not die after being swallowed up in the earth (Numbers 16:32). They remain in Sheol, waiting for the arrival of the Messiah to release them.

A Midrash related by the Talmudic commentary called Tosafot (Kiddushin 31B) describes how Korach’s punishment is connected to the appearance of the Third Temple. Tosafot asks why Psalm 82 is described as a  ‘Mizmor’, a joyous song,  when the subject matter is the tragedies accompanying the destruction of the Temple. Tosafot explains that Asaf, a descendant of Korach, saw the salvation of his ancestor in the destruction of the Temple and Israel.

“Until now, I didn’t think that anybody would retrieve my cheap earthenware pitcher from the well,” she exclaimed. “But now, whoever retrieves the golden pitcher, will retrieve mine as well!”

Tosafot explains that the sons of Korach rejoiced when they witnessed the gates of the Second Temple sink into the ground. They understood that God would not allow the Temple to remain destroyed forever. The sons o Korach reasoned that when God came to rebuild the Third Temple, he would save them as well.

It is for this joyous song that the Sons of Korach will sing at the Third Temple that Asaf, who was from the family of Korach, sang a joyous Mizmor.