Now Moshe, tending the flock of his father-in-law Jethro, the priest of Midian, drove the flock into the wilderness, and came to Horeb, the mountain of Hashem. 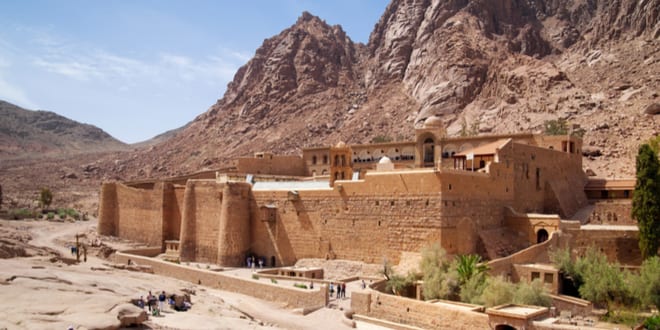 Theories about the true location of Mount Sinai abound but one investigative filmmaker calls on the audience to open their bibles and rank the candidates. The results may help archaeologists in their search for evidence of the historicity of the Exodus.

Investigative filmmaker Tim Mahoney released his new movie searching for physical evidence of Biblical Mount Sinai. In an approach unique to a film of this type, Mahoney presents six possible locations, presents the evidence he discovered, and challenges the viewer to decide. The movie is the result of 20 years of searching by Mahoney.

“I am not making Christian films,” Mahoney explained. “I am making investigative films as a Christian.”

“All my life I had believed the Bible stories were true. I know some people say, you don’t need any evidence; just have faith. But if there’s no hard evidence for any of it, had I been believing in a lie?”

Mahoney used five major criteria to narrow the possibilities down to six possible candidates. Three of the possible sites are presented in the first of two installments and a “scorecard” is offered to help the viewer decide. The scorecard helps the viewer rank the details of the journey from Egypt. The Israelites are recorded as stopping at seven campsites between the miraculous crossing of the Red Sea and Mount Sinai. The full list is recorded in the Book of Numbers chapter 33, while Exodus records only some of the stops but with more details of events along the way. The Bible gives a total timeframe of 45 to 60 days from leaving Goshen to reaching Mount Sinai.

Mount Sinai must be near Midian where Moses lived for 40 years after fleeing Egypt.

Mount Sinai is also described as being ‘the backside” (to the west) of the wilderness (Ex. 3:1).

Based on various interpretations of the Hebrew word “aleph” (typically meaning thousand), there would have been thousands to millions of Israelites camping at Mount Sinai. In light of this, there must be a large plain at the mountain. If this was so, there must be a nearby plain that’s large enough for the people to live out for a year.

The Bible says that the Israelites were able to wash their clothes at Sinai. Considering their population size, their large flocks and herds, and the fact they were at the mountain for nearly a year, the site needed to have a very large supply of water.

There needs to be a cave because the Bible describes that Elijah lodged there during his time at Mount Sinai (1 Kings 19:8-13).

For years, Jebel Musa (the mountain of Moses) in the southern Sinai Peninsula has been identified as the Biblical mountain but in recent years, several other mountains have been suggested as possible candidates.

Many believe Jabal al Lawz in Saudi Arabia is a probable site.

The movie opened in over 800 theaters across the USA on October 17-18 but the DVD can be purchased at the website. Part two will be released early in 2023.