When Hashem saw how corrupt the earth was, for all flesh had corrupted its ways on earth,

Home » Noach: The Flood, the Tower, and the battle for Western Civilization 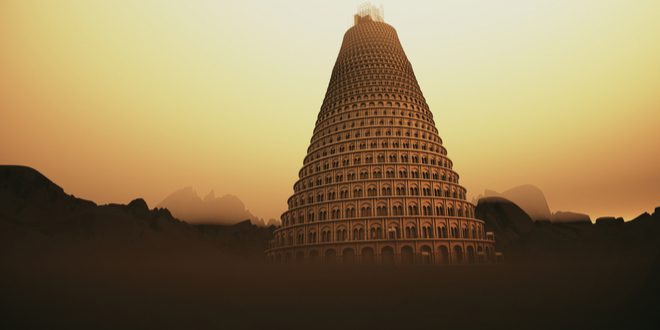 This week’s Torah portion, Noach, tells the stories of two failed societies. In each of these two stories, we encounter a breakdown in values that leads to dissolution and destruction.

First, the generation of the flood.

The Hebrew word translated here as “violence” is chamas, a word whose precise meaning is vague. It appears to be a general term for lawlessness and cruelty. According to the Jewish sages, chamas refers to rampant theft, violence, rape, and general disregard for law and order. The final phrase in the verses cited above, “for all flesh had corrupted its way upon the earth,” is understood to refer to a complete breakdown of sexual boundaries between the sexes and even between animals and humans.

The second society we encounter is that of the tower of Babel. Here, the nature of their wrongdoing is unclear from the Bible. All the Bible tells us is that everyone got together to build a tower. Why did God disperse them? The text is so vague that the Talmud was led to ask “What did they do?” (Sanhedrin 109a) The Talmud proceeds with numerous suggestions as to what sinister motives they possessed. Most of the opinions point to some motive of rebellion against God.

I’d like to suggest that there are two phrases in this story that reveal what was really going on. First, is the opening verse of the story.

And the entire earth was one language and single ideas. – Genesis 11:1

“One language and single ideas.” A few verses later, we see that it was this characteristic of that society that concerned God and led to His response.

And the Lord said, “Behold, they are one people, and they all have the same language. And this is what they have started to do, and now nothing which they plan to do will be impossible for them.” – Genesis 11:6

The second phrase that reveals the true nature of this society is found in their declaration of their plans for the tower.

And they said, “Come, let’s build ourselves a city, and a tower whose top will reach into heaven, and let us make a name for ourselves; otherwise we will be scattered abroad over the face of all the earth.”

Why did they want to build a city and a tower? Was it to better care for the needy? Was it in order to use the tower in the service of God?

“Let us make a name for ourselves.” The generation of the tower of Babel sought to glorify not God, but themselves.

Let’s return for a moment to the first problem with this society. Why was God so concerned about the fact that everyone had “the same language”? Why is this a problem? And why did God say that “nothing which they plan to do will be impossible for them”?

I’d like to suggest that the leaders of the tower of Babel society were the first totalitarian dictators.

Totalitarians have always needed to remove any possibility of dissent and difference of opinion as a precondition to hanging on to power. Control of information by criminalizing dissent is critical to wielding total control over society. Alongside this control of information, such dictators also typically engage in projects designed to aggrandize themselves in the eyes of the public such that people are led to believe that they cannot survive independent of these all-powerful governing authorities. By “making a name for ourselves” and suppressing dissent, dictators throughout history have made it near impossible for those who live under them to disperse and seek their own freedom and independence.

The generation of the flood and the generation of the Tower of Babel represent two ways that a healthy and free society can lose its way. Unfortunately, in today’s Western world, we see indications that both these templates of societal decay are afoot.

Rampant crime, looting, and the breakdown of sexual boundaries are endemic problems sweeping the US and European nations alike. At the same time, we see heavy-handed censorship that demands uniformity of speech and thought coupled with Communist-style promotion of the all-powerful state as the only path to survival. Tragically, this has become the direction of the current US government in cooperation with media and corporate elites who seek to limit personal freedom and undermine traditional Biblical values. The flood and the tower are both alive and well in 2022.

In the words of Ecclesiastes,

The Biblical narratives of the generation of flood and the Tower of Babel are, tragically, as relevant today as they ever were. These stories are followed by the introduction of Abraham, who we will meet in next week’s Torah portion. Then, as now, the answer to the dangers of the flood and the tower is the path of Abraham, the father of faith, who had the courage to call out the name of God in a hostile world.

We must continue to fight for the eternal values of law, order, personal freedom, and humility before God.

Rabbi Pesach Wolicki is Executive Director of the Center for Jewish-Christian Understanding and Cooperation. He is cohost of the weekly Shoulder to Shoulder podcast.