Let there be light: NASA releases high-resolution photo of the “Pillars of Creation” where stars are born

Hashem saw that the light was good, and Hashem separated the light from the darkness.

Home » Let there be light: NASA releases high-resolution photo of the “Pillars of Creation” where stars are born 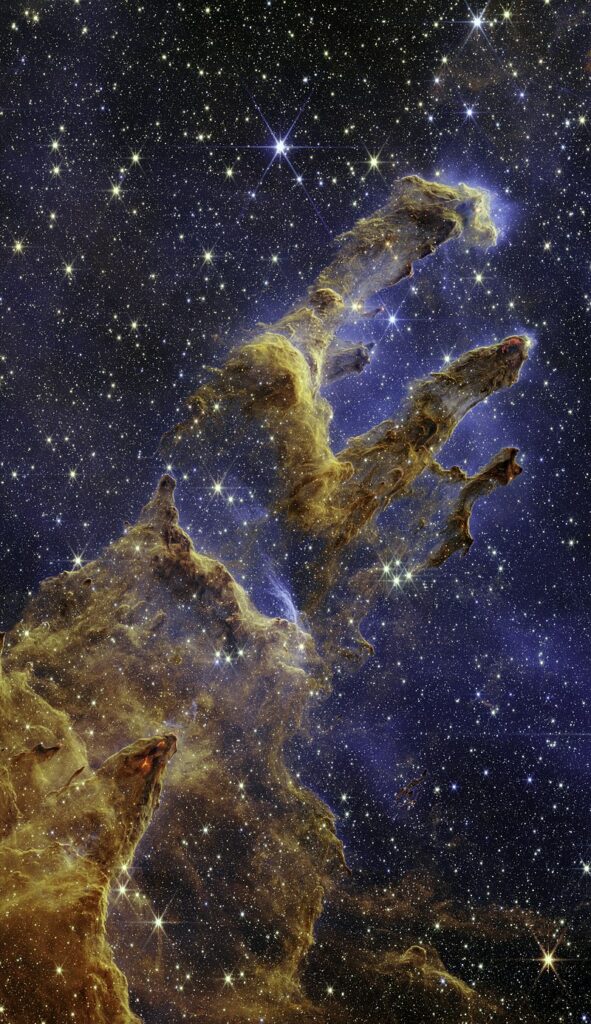 NASA has just released images of a cloud of dust in which stars are formed. One Orthodox Jewish physicist celebrated the discovery, saying that it actually reinforces the Biblical story of Creation.

NASA released images from the Pillars of Creation located in the Eagle Nebula in the constellation Serpens located about 6,500 light years from the Earth. The never-before-seen images give insights into the creation of stars.

“The most interesting thing about this image is that it’s actually showing us star formation in progress,” Anton Koekemoer, a research astronomer at STScI, told Space.com.

The pillars are actually an unstable dust cloud formation shaped by powerful stellar winds emanating from a cluster of large stars. They are held together by cosmic magnetic fields.

The image came from the James Webb Space Telescope was launched in December last year, replacing the Hubble Space Telescope as the largest optical telescope in space at a total cost of $10 billion. Its high resolution and sensitivity allow it to view objects too old, distant, or faint for the Hubble Telescope.

“I’m amazed at how well Webb can see into the dust and gas that is completely dark with Hubble,” Koekemoer said. “With Hubble, you don’t see any detail at all. But Webb, with its infrared vision, can penetrate directly into these regions and see the stars forming inside those dusty pillars. It’s extremely exciting.”

The red dots in the image are newborn stars, which scientists estimate are only a few hundred thousand years old. Called protostars, they are clouds of dust and gas so dense that they collapse under the weight of their own gravity. As the clouds collapse, they form rotating balls, which will eventually become so dense that the hydrogen atoms in their cores will begin to fuse together in the process of nuclear fusion, which makes stars shine. Before fusion, the temperature in the clouds is 390 degrees Fahrenheit but when fusion begins, that jumps up to 35 million degrees.

For scale, each of the dots takes up an area some 8 to 9 light-years across, larger than our entire solar system.

Dr. Gerald Schroeder is a scientist with over thirty years of experience in research and teaching. He earned his Bachelor’s, Master’s, and Doctorate degrees all at the Massachusetts Institute of Technology. He is also a lecturer at the Aish Hatorah Yeshiva in Jerusalem.

Dr. Schroeder stated emphatically, “No scientific discovery has ever contradicted that.”

Dr. Schroeder cited the book, A Universe from Nothing written by Lawrence Krauss and published in 2012. The main thesis of the book which has been adopted by scientific secularism can be summed up in one sentence:

“We have discovered that all signs suggest a universe that could and plausibly did arise from a deeper nothing—involving the absence of space itself and—which may one day return to nothing via processes that may not only be comprehensible but also processes that do not require any external control or direction.”

Dr. Schroeder explained that this was described in chapter eight of Proverbs which speaks about wisdom.

Hashem created me at the beginning of His course As the first of His works of old. Proverbs 8:22

The word for ‘beginning’ is ‘reishit’ which is also the first word of the Creation story in the beginning of Genesis.

“The Torah does not say that God created the world from something,” De. Schroeder said. “He began with the laws of nature, with wisdom. No scientific discovery has ever contradicted this.”