What does biblical tradition tell us about the solar eclipse over Israel?

And in that day —declares my God— I will make the sun set at noon, I will darken the earth on a sunny day.

Home » What does biblical tradition tell us about the solar eclipse over Israel? 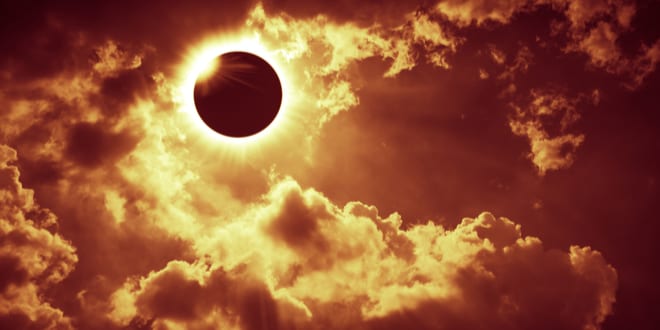 Israelis gazing at the heavens on Tuesday enjoyed a partial solar eclipse. In Jewish tradition, the event has great spiritual significance including acting as a harbinger of the end-of-days.

On Tuesday, a partial solar eclipse passed over Israel beginning at 12:58, peaking at 2:11, and ending at 3:22 PM. People in Israel could see 41%-47% of the Sun, depending on location, according to the Israel Space Agency.

A solar eclipse occurs when the Moon passes between Earth and the Sun, thereby obscuring Earth’s view of the Sun. For this reason, a solar eclipse can only occur when there is a new moon, coinciding with the beginning of a Hebrew month. In this case, the month of Cheshvan began at sundown on Monday.

The eclipse was visible from the North Atlantic Ocean, from most of the European continent with the exception of its southwestern part, the western part of Asia, and northeastern Africa.

According to the Israel Space Agency, the next solar eclipse will be on August 2, 2027.

In its discussion of eclipses, the Talmud (Sukkot 29a) specifically described solar eclipses as being a bad omen for the nations that base their calendars on the solar cycle. At the end of this section describing the omens contained within eclipses, the Talmud states a disclaimer: “When Israel does the will of the place (God), they have nothing to fear from all of this,” citing the Prophet Jeremiah as a source.

The same source in the Talmud specifies that lunar eclipses are a bad omen for Israel since Israel is spiritually represented by the moon. If the lunar eclipse takes place in the east side of the heavens, then it is a bad omen for all the nations in the east, and similarly, if it occurs in the western hemisphere of the sky, it is a bad sign for all the nations in the west.

A solar eclipse can only occur because the sun and the moon appear to be the same in diameter as seen from the earth. This is due to a coincidence that is unique and has not been found anywhere else in the galaxy. Though the sun is about 400 times farther away than the moon, the sun is also about 400 times bigger. If the distances or sizes were different than they actually are, eclipses would not take place.

Though initially described in equal terms, the verse then noted the sun and the moon were not equal, with the sun being called the “greater light” and the moon the “lesser light”. The Talmud explains that when God created the sun and the moon they were equal in every manner, including size and intensity. The moon complained, saying, “Two kings cannot share one crown.” God agreed and made the moon shine less intensely, compensating the moon by commanding Israel to set the calendar by its cycles.