The minds of both kings will be bent on evil; while sitting at the table together, they will lie to each other, but to no avail, for there is yet an appointed term. 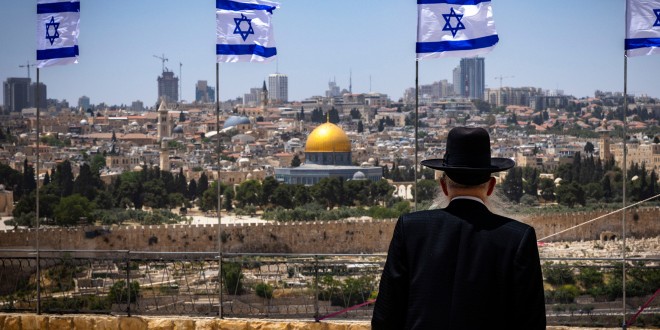 In an interview with the Arabic-language channel Hala television on Tuesday evening, interim Prime Minister Yair Lapid revealed his platform for the upcoming elections.

“We will take care of the freedom of worship of Muslims at al-Aqsa, who can go up to pray,” Lapid said. “We allow Jewish visitors to ascend the mount, but not to pray. They ascend and the visits are supervised to ensure that the status quo is not violated.”

The “status quo” Lapid referred to regarding Jerusalem is based on a firman (decree) of Ottoman sultan Osman III in 1757 that preserved the division of ownership and responsibilities of various Christian holy places. The details were further formalized in the 1949 United Nations Conciliation Commission after the 1947–1949 war. The firman and consequent status quo ensured Jewish right to visit their holy sites (albeit with limitations) but when Jordan illegally occupied Jerusalem, Hebron, and Bethlehem in 1948, Jews were barred from the holy sites in contravention of this status quo. Jews were not permitted back to their holy sites until the IDF conquered them in 1967.

Currently, there is no law prohibiting Jewish prayer on the Temple Mount. Jewish prayer is, in fact, protected by Israeli law ensuring freedom of religion. This law has been upheld several times in the Supreme Court, defending the right of Jews to pray on the Temple Mount, most notably in a 2014 Magistrate’s Court case brought by Rabbi Yehudah Glick. This ruling is based on legally protected freedom of religion.

In addition, a survey in May conducted by the Israel Democracy Institute, half of the respondents supported Jewish prayer on the Temple Mount while 40 percent said they opposed it. The rest were undecided.

During the interview, Lapid went on to address the Nation-State Law.

“I oppose the Nation-State law and I think it should be changed and a section of civil equality added to it,” Lapid told Hala.

“There were talks about this, that a section be added to the basic law: human dignity and freedom,” said Lapid, adding that since the law was passed in 2018 he has been against it.

The law was passed by the Knesset in 2018. According to the law, Israel would be defined as the nation-state of the Jewish people, and the right to self-determination in Israel would be unique to the Jewish people. The law also states that Israel should establish ethnic communities where every resident may preserve their culture and heritage. Hebrew would be considered the official language of the state while Arabic would be granted a special status.

The Hebrew calendar would become the official calendar of the state of Israel, and Hebrew law would serve as an inspiration to Israeli legislators.
In his interview, Lapid went on to reiterate his commitment to a “two-state solution” that would create a Palestinian state in Judea and Samaria. Last month, Lapid affirmed his commitment to a two-state solution in an address to the UN General Assembly.

According to a July survey conducted by the Israel Democracy Institute, only a minority of Israeli Jews (32%) said they would support a peace agreement between Israel and the P.A. if it meant dividing the land of Israel into two states. A survey published in Mako News claimed that 28% of Israelis support a two-state solution. In the same Mako survey, 28% of Israelis agreed that Lapid was suited to continue in the role of prime minister whereas 46% supported opposition leader Benjamin Netanyahu.

He also addressed the problem of violent crime in Arab society, laying the responsibility on the Israeli government.

He added that the issue was neglected for years. “The curve of violence went up and up. It’s not just the murders, it’s also the protectionism, also the rampage on the roads in the south.”

“There are years of neglect here that built very, very strong criminal organizations and it will take time for us to deal with it,” he said.