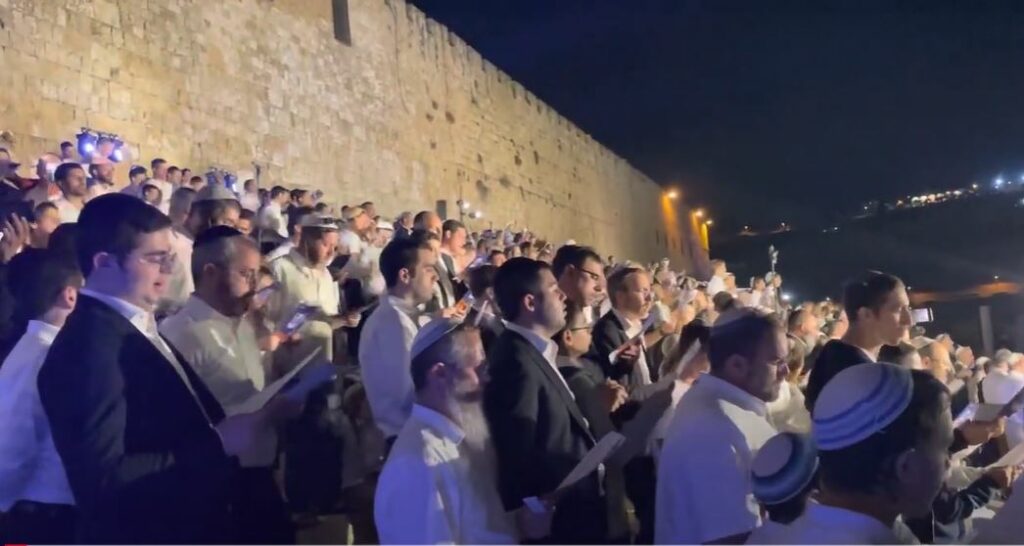 On Thursday night, 600 Jewish men from the tribe of Levi held a rehearsal on the steps leading up to the Temple Mount to prepare to play their role in providing the musical accompaniment for the Third Temple service.

Israel365 News correspondent Joshua Wander spoke with Yitzchak Weiss, who arranged the music and is one of the organizers of the event or, in his own words, “the father of this idea.”

“The idea is to bring back the singing of the Levites and to renew it,” Weis said.

He explained that the idea first came to him when he was the principal of the Mizmor music school in Givat Washington. The school was opened in 2010 for the purpose of developing higher learning in music for Observant Jews.

“I wanted to make something special for Jewish music, not just to learn music to be a singer” eiss explained. “I asked myself what is the essence, the plus that we can give to music. We thought about composing music to the text of the Bible that the Levites were singing in the Temple and to make [comtemporary] music for it. We started the project, giving some students to compose music. And then we thought, why shouldn’t we make a living choir.”

The school began to spread the word in order to gather a group of Levites. In the Bible, the tribe of Levi included Moses and Aaron. Kohanim (priests) are descendants of Aaron and his descendants became a subset of the tribe of Levi. The other members of the tribe were chosen by God to forfeit their portions of land in Israel and to serve in the Temple. The Levites performed various functions in the Temple including guarding as well a serving all the musical needs.

Jewish communities are scrupulous about perpetuating the status of the Levites which is passed from father to son. Only Jewish men whose fathers were Levites are considered eligible. They are recognized for conspicuous honors in religious services and their status as Levites is inscribed on their gravestones.

Weiss noted that gathering together a group of Levites for such an undertaking was quite difficult since they represent only about 4% of the Jewish population.

“We realized that if we held rehearsals in one place, people would have to come from far away,” Weiss said. “We understood that we had to develop a larger list of Levites. So in 2019, we decided to do a massive singing event for Levites.”

About 300 Levites came to that event.

“We wanted to make a choir but then the Corona came,” Weiss said. The event on Thursday was the first post-pandemic rehearsal for the Levites, bringing together about 600 men to practice a medley from the Hallel service composed of Psalms 113-118 which is recited ‎on major and minor festivals.

“I believe the Third Temple is about unity and the ingathering of the exiles,” Weiss said. “So the music itself is from the East and the West, from all types of congregations and traditions. Also the instruments. We have piano and drums and cello, but we also have a qanun, [a type of Middle Eastern zither], and an oud, [a Middle Eastern lute]. These are representative of the instruments that were in the Temple. There was a brass section, wind instruments, stringed instruments, and percussion.”

The participating Levites were divided into three separate choral groups to practice their parts, after which they all came together to perform with instrumental accompaniment.

“This is not theory or practical,” Weiss said. “This is tradition. We are bringing back Levites singing. I don’t know if that is the way it is going to be in the Third Temple. But for 2,000 years, the Levites didn’t sing.”

Weiss mentioned the tradition that the Levites wash the hands of the Kohanim before they bless the congregation during prayer.

“That’s all the Levites did for the past 2,000 years,,” Weiss said. “I am bringing back the context for being a Levite. That’s my vision.”

Weiss emphasized that he is not a Levite, underscoring the selflessness of his efforts.

The event was co-sponsored by the Jerusalem municipality.

“That is an important detail,” Wander noted. “The municipal government is helping to prepare for the Third Temple.”

In the days that the Temples stood in Jerusalem, the Levites sang on the 15 steps— corresponding to the 15 Songs of Ascent in Psalms15 —that led from the Ezrat Nashim (“Court of Women”) to the Ezrat Yisrael(“Court of Israelites”). The Mishna states that there were never less than 12 Levites standing on the platform, but their number could be increased indefinitely. While ordinarily no minor was permitted to enter the Azarah (“Courtyard”) to take part in the service, the young Levites were permitted to join in the singing when the adult Levites stood up to sing.