Joyfully shall you draw water From the fountains of triumph, 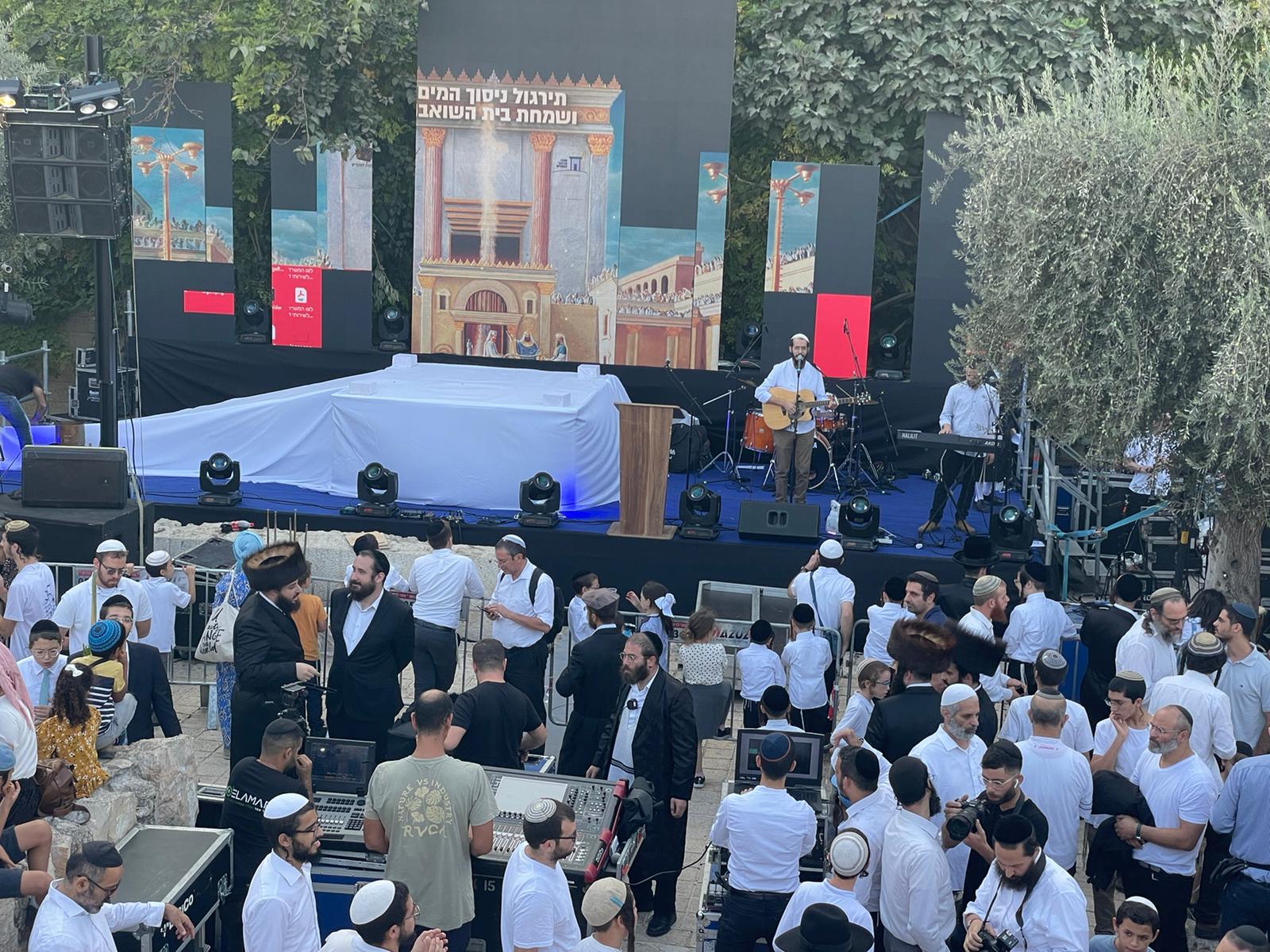 On Tuesday, a full-dress reenactment of the water libation as it was performed in the Temple was held in Jerusalem with several hundred participants led by Kohanim in priestly garb, accompanied by Levites playing musical instruments.

The event began at Shaar Hashpot (the dung gate) in Jerusalem’s Old City where participants joined Kohanim (priests) in Biblically mandated vestments and Levites with musical instruments, also wearing special vestments. The musically gifted Levites led the ceremony with joyous music on drums, violin, guitar, and clarinet, winding down ancient wlakways into the valley below the Temple Mount. The crowd sang and danced as they passed from the archaeological remains of the ancient City of David, through an Arab village, to the Shiloach (Siloam) Spring which was used in Temple times. The procession was punctuated by stops during which four-foot-long pure silver trumpets were sounded.

At the head of the parade was the gold vessel, the water jug.

At the Shiloach Pool, the jug was filled. The procession climbed back up to the top of the mountain. A model altar and its utensils had been set up in an open area adjacent to the Western Wall. The altar was decorated with large leafy willow branches as was done in the Temple.

The ceremony culminated in the priestly blessing after which the once-in-seven-years Hakhel ceremony was held.

Though not explicitly mandated in the Torah, the water libation is part of the oral tradition passed down from Moses. Sukkot is a joyous holiday and the water libation was the focal point of this joy. In the Temple, the ceremony would take fifteen hours with accompanying celebrations lasting all night until the Temple service began again the next morning. Nations came from around the world to take part in the Sukkoth celebrations making it international worship of  God.

In Temple times, a libation of water was made together with the pouring out of wine at the morning service on the last six days of the week-long Sukkot holiday. Kohanim descended from the Temple to the Shiloach Spring at the base of Mount Moriah, where they filled the flask with three log of spring water (approximately two pints) and returned to the Temple.

Two Kohanim then ascended the stone altar in the Temple’s inner courtyard, placing two silver cups on the southwestern corner. One Kohen poured the water from the silver flask while the second Kohen simultaneously poured wine from the second cup, both liquids flowing into holes in the altar specially prepared for this ceremony.

The Shiloach Pool (Siloam in English, Silwan in Arabic) has a huge Biblical import that will re-emerge when the Third Temple is built. The Pool of Siloam was the starting point for pilgrims who made the annual pilgrimage to Jerusalem for the Biblical feasts. They would use the pool to wash and ritually purify themselves before ascending by foot to the inner court of the Temple Mount to bring their sacrificial offerings. Located outside the walls of the Old City of Jerusalem to the southeast, the pool is fed by the waters of the Gihon Spring which are carried there by the Siloam Tunnel, also known as Hezekiah’s Tunnel. Sometimes referred to in the Bible as the Lower Pool, the pool was built during the reign of Hezekiah (715–687 BCE) to replace an older Canaanite tunnel, known Biblically as the Upper Pool, that was vulnerable to attackers. The new pool and tunnel left besieging armies without access to the spring’s waters.  Archeologists believe that during the Second Temple Era the waters continued to flow south and were collected in an additional, larger pool. This pool was discovered during the summer of 2004 and is continuing to be uncovered today.

It should be noted that the year after Shemitah is auspicious for the arrival of the Messiah. The Babylonian Talmud in the Tractate of Sanhedrin, 97a, brings the verse from Amos:

This verse comes in the context of a prophecy about God bringing the nation of Israel back from exile among the nations. Amidst descriptions of the days preceding the Messiah, the Talmud says:

“As it is written, in that day I will raise up the tabernacle of David that is fallen. Our Rabbis taught: in the seven-year cycle at the end of which the son of David will come in the first year, this verse will be fulfilled.”

On Rosh Hashanna, two weeks ago, the Shemittah (Sabbatical year) ended. The Talmud is stating explicitly that the Messiah will come in the first year after the Shemitah.  It should be noted that the Talmud describes the days before the Messiah in-depth, and they are especially difficult times.