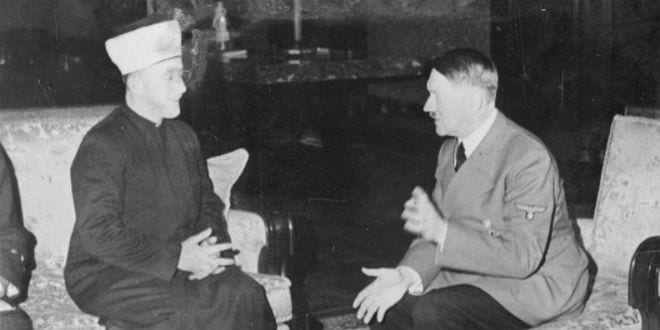 Today in history, on October 10, 732, one of world history’s most decisive battles saved Europe from becoming Islamic.  Interestingly, none other than Adolf Hitler regretted this development.  Why—and why his assessment was wrong—is discussed below.

Precisely one hundred years after the death of Islam’s prophet Muhammad in 632 — a century which had seen the conquest of thousands of square miles of formerly Christian lands, including Syria, Egypt, North Africa, and Spain — the scimitar of Islam found itself in the heart of Europe in 732, facing that continent’s chief military power, the Franks.

After the Muslim hordes, which reportedly numbered 80,000 men, had ravaged most of southwestern France, slaughtering and enslaving countless victims, they met and clashed with 30,000 Frankish infantrymen under the leadership of Charles Martel, on October 10, somewhere between Poitiers and Tours. An anonymous medieval Arab chronicler describes the battle as follows:

Near the river Owar [Loire], the two great hosts of the two languages [Arabic and Latin] and the two creeds [Islam and Christianity] were set in array against each other. The hearts of Abd al-Rahman, his captains and his men were filled with wrath and pride, and they were the first to begin to fight. The Muslim horsemen dashed fierce and frequent forward against the battalions of the Franks, who resisted manfully, and many fell dead on either side, until the going down of the sun.

Entirely consisting of wild headlong charges, the Muslim attack proved ineffective, for “the men of the north stood as motionless as a wall, they were like a belt of ice frozen together, and not to be dissolved, as they slew the Arab with the sword. The Austrasians [eastern Franks], vast of limb, and iron of hand, hewed on bravely in the thick of the fight,” writes one chronicler. The Franks refused to break ranks and allow successive horsemen to gallop through the gaps, which Arab cavalry tactics relied on. Instead, they tightened their ranks and, “drawn up in a band around their chief [Charles], the people of the Austrasians carried all before them. Their tireless hands drove their swords down to the breasts [of the foe].”

At one point, Allah’s warriors surrounded and trapped Charles, but “he fought as fiercely as the hungry wolf falls upon the stag. By the grace of Our Lord, he wrought a great slaughter upon the enemies of Christian faith,” writes Denis the chronicler. “Then was he first called ‘Martel,’ for as a hammer of iron, of steel, and of every other metal, even so he dashed and smote in the battle all his enemies.”

As night descended on the field of carnage, the two bloodied armies disengaged and withdrew to their camps. At the crack of dawn, the Franks prepared to resume battle, only to discover that the Muslims had all fled under the cover of darkness. Their master, Abdul, had been killed in fighting the day before, and the Berbers — freed of his whip and having tasted Frankish mettle — apparently preferred life and some plunder over martyrdom. They all fled back south — still looting, burning, and enslaving all and sundry as they went. Aware that his strength lay in his “wall of ice,” Charles did not give chase.

The aftermath “was, as all cavalry battles, a gory mess, strewn with thousands of wounded or dying horses, abandoned plunder, and dead and wounded Arabs. Few of the wounded were taken prisoner — given their previous record of murder and pillage.” The oldest sources give astronomical numbers of slain Muslims, with only a small fraction of slain Franks. Whatever the true numbers, significantly fewer numbers of Franks than Muslims fell in that battle. Even Arab chronicles refer to the engagement as the “Pavement of Martyrs,” suggesting that the earth was littered with Muslim corpses.

“The joyful tidings were soon diffused over the Catholic world” and the surviving chronicles of the day — including that of the aforesaid and anonymous Arab — portray this victory in epic if not apocalyptic terms.

Indeed, of all the many battles between Islam and Christendom, Tours has, beginning with the contemporary chronicles up until the modern era, been one of if not the most celebrated in the West. For although the Mediterranean was lost, and although raids on the European coastline became a permanent feature, Islam was confined to the Iberian Peninsula, leaving Western Europe to develop organically.

It is for this reason that, well into the twentieth century, leading Western historians, such as Godefroid Kurth (d. 1916), still saw Tours as “one of the great events in the history of the world, as upon its issue depended whether Christian Civilization should continue or Islam prevail throughout Europe.”

It is also precisely because of this outcome that the leader of Nazi Germany, Adolf Hitler, once reportedly lamented,

Had Charles Martel not been victorious at Poitiers — already, you see, the world had fallen into the hands of the Jews, so gutless a thing was Christianity! — then we should in all probability have been converted to Mohammedanism, that cult which glorifies heroism and which opens the seventh Heaven to the bold warrior alone. Then the Germanic races would have conquered the world. Christianity alone prevented them from doing so.

In other words, the führer—who further accused Christianity of promoting “meekness and flabbiness”—believed what many in the West continue to believe, particularly those whose worldview is colored by Hollywood: that, historically, Christianity only bred weak and feeble men, especially when compared to more “robust” peoples, in this case, Muslims.

What this popular view fails to answer is the simple observation: if Medieval Christians were weak and feeble, especially in comparison to Muslims, why did they, not only defeat their jihadist enemies in hand-to-hand combat, but ensure that Western civilization flourish, as amply demonstrated in Defenders of the West: The Christian Heroes Who Stood Against Islam?