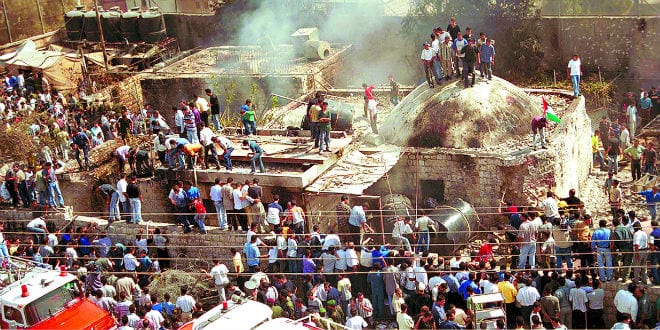 The Israeli security establishment announced on Thursday that they would ban Jews from visiting the Tomb of Biblical Joseph located in Shechem (Nablus).  The decision comes as the IDF is carrying out nightly raids as part of Operation Breakwater focused on curtailing Palestinian terrorism. Kan News reported the story on Thursday, adding that the IDF is seeking to limit its activity in Shechem in order to allow the Palestinian Authority’s security forces more autonomy to operate there.

In 1995, in accordance with the Oslo Accords, the jurisdiction of Nablus was handed over to the Palestinian Authority. However, Israel retained control of several religious sites, one of which was Joseph’s Tomb. The Interim Agreement stipulated that: “Both sides shall respect and protect the religious rights of Jews, Christians, Muslims and Samaritans concerning the protection and free access to the holy sites and freedom of worship and practice.” In 1996, Palestinian rioters murdered six IDF soldiers at the army outpost at the site and destroyed the religious site. The site was then turned over to PA security forces, after which it was targeted by arson and ransacked.

After the events of October 2000, the IDF prohibited Israeli access to the tomb. In 2002, the tomb was retaken by the IDF, and shortly afterward, in response to numerous requests, they renewed guarded tours of the tomb. One day every month, at midnight, as many as 800 visitors were allowed to pray at the gravesite.  However, soon after, citing security reasons, Israel re-imposed a ban on Jewish pilgrims obtaining special permits and traveling to the tomb. A few months later, the tomb was ransacked yet again. The IDF responded it had no plans to secure the site.

In 2007, at the request of several MKs, a group of Jews was allowed to visit the site, reporting that the dome was gradually being destroyed and the surrounding area was being turned into a garbage dump. In 2008, the site was renovated.

As of 2009, monthly visits to the tomb in bullet-proof vehicles under heavy IDF protection are permitted. In late April 2009, a group of Jewish worshipers found the headstone smashed and swastikas painted on the walls, and boot prints on the grave itself.

On 24 April 2011, PA police officers opened fire on three cars of Israeli worshipers after they finished praying at Joseph’s tomb. An Israeli citizen was killed, and three others were wounded.

Palestinian violence at Joseph’s Tomb is not in response to any constant Israeli military presence or attempts to establish a Jewish presence there. Palestinian rioters object to Jewish prayer at the site, going so far as to burn the building to the ground in 2000, claiming it was better to destroy the tomb rather than allow any other religion access.