Hamas warns Red Heifers signal a new stage in the “Judaization of the mosques” on Temple Mount; calls for violence

Home » Hamas warns Red Heifers signal a new stage in the “Judaization of the mosques” on Temple Mount; calls for violence 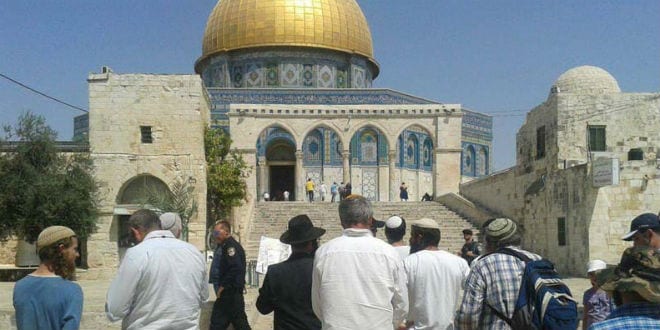 Arab media are citing the arrival of the red heifers in Israel as a threat to the “Al Aqsa Mosque” in Jerusalem. The announcement comes during the Jewish high holidays and in a period when the IDF is engaged in ongoing operations to combat terrorism in Samaria.

Arab-language media, including the  “Al Manar” channel, which is closely associated with Hezbollah, are reporting on the intention of the Temple organizations to make a sacrifice on the Temple Mount. The Arab announcement comes just a few weeks after Boneh Israel, an organization that connects Christian lovers of Israel to the Holy Land, brought five young red cows to Israel with the intention of reinstating the Torah commandment associated with the Red Heifer.

Palestinian leaders are warning against Jews performing religious rituals during the holidays such as blowing the shofar (ram’s horn). The Israeli police have responded by restricting Jews from blowing the shofar in areas adjacent to the Temple Mount despite court rulings that this activity is protected by law.

The Hamas journal Al–Rassala published an article claiming that the slogan “Al Aqsa is in Danger” is no longer sufficient because the Israelis are already working on manifesting the Temple rituals that would  “Judaize the holy mosques”.

At a street rally held in Gaza last week, several speakers warned that Jews would hold religious ceremonies at the Temple Mount during the holidays. They especially warned against the blowing of the shofar and animal sacrifices, calling for a general uprising inside Israel, and called to prepare for an action similar to the one that led to the “Guardian of the Walls” operation last year.

Rabbi Yosef Berger, the rabbi of King David’s Tomb on Mount Zion, noted that the Palestinian reaction is based in misrepresentations of the Bible.

“The ceremony of the Red Heifer may only be performed at a specific location on the Mount of Olives,” the rabbi explained to Israel365News. “It is not performed on the Temple Mount, as they claimed. Also, the young cows that were brought to Israel were less than one year old and must be at least two years old to be suitable for the ceremony.”

Rabbi Berger noted that on a deeper level, the Arab approach was based on lies.

“The Muslims have used violence to maintain a Palestinian monopoly at Judaism’s holiest site,” he noted. “They have effectively prevented the establishment of the prophetic house of prayer for all nations. The Temple of Solomon was the source of global peace and all 70 nations came together to celebrate the Biblical feast of Sukkoth.”

“When the US president announced his intention to establish his embassy in Jerusalem, many people predicted this would lead to ar. What actually happened was the signing of the Abraham Accords. Jerusalem is the source of peace. Ishmael is a man of war and conflict.”

“I predict that if the Jews begin praying on the Temple Mount, this will increase peace in the world, perhaps even calm the situation in Ukrain.”

Tensions in Jerusalem have been rising during the Jewish holiday season. Over the two days of Rosh Hashanna, a record 1,083 Jews went up to the Temple Mount. This completes the record of 51,254 Jews who ascended the Temple Mount this year, 5782.

At the same time, masked Arabs used the Muslim sites to launch attacks, throwing stones and explosive fireworks at police and Jewish visitors to Judaism’s holiest site. Arabs have been clashing with police in Jerusalem’s Old City for the past three days.

Video released by police appeared to show fireworks being shot from an alcove above a door to the mosque, which a spokesman for the force accused the Palestinians of “desecrating.”

Clashes also took place around the nearby Lion’s Gate. During the holiday, police officers arrested 16 people on suspicion of disturbances, violent riots, and incitement. There were no casualties reported to Israeli security forces.

The flight to Israel and preparations cost over $250,000 dollars. Now that they are in Israel, the heifers will need to be raised until they are at least two years old. There are five heifers and the cost to feed them is $10 a day per cow. $50 feeds the entire group of cows for one day can clisk on the image below.