US Jewish leaders, Erdogan meet for the first time in three years

Home » US Jewish leaders, Erdogan meet for the first time in three years 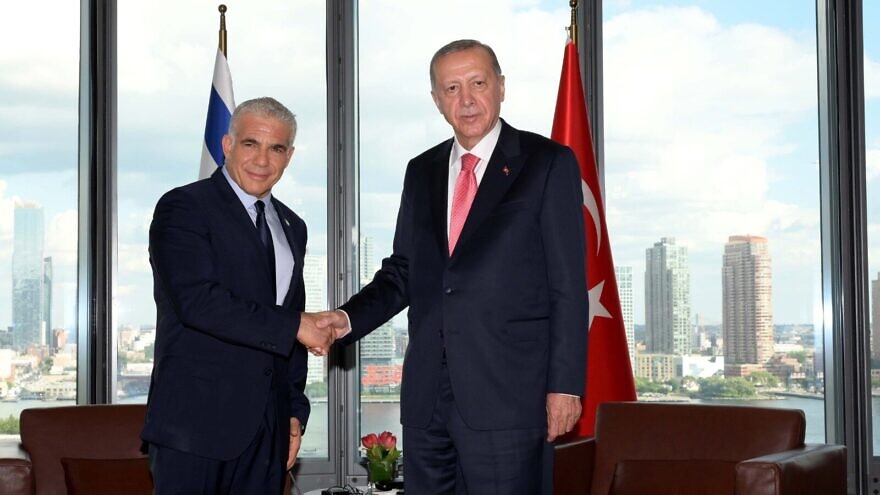 Behind the scenes of the annual U.N. General Assembly meeting last week, a group of American Jewish organizations was quietly working to improve ties between the global community, Israel and the world body.

Representatives from organizations under the umbrella of the Conference of Presidents of Major American Jewish Organizations held a number of high-level meetings with world leaders in New York City.

Dan Mariaschin, CEO of B’nai B’rith International, told JNS he was present for a meeting at the Turkish mission to the United Nations with President Recep Tayyip Erdogan, a leader who has had a cold and often adversarial relationship with Israel. The two countries recently announced a reopening of full diplomatic relations.

“This is the first time in three years that that a meeting has taken place between representatives of the Jewish community and the president of Turkey. Anything that can be done to lower the temperature, to bring more stability to the region, I think is in everybody’s interest,” Mariaschin said.

“We’re also mindful at the same time that there is an important relationship going on in the eastern Mediterranean between Israel, Greece and Cyprus, related not only to energy but to other issues as well. But when you take the two together, the bottom line really is can we move towards more stability in the region? And that’s why these meetings take place.”

Jewish leaders raised concerns about Hamas’s base in Turkey and Erdogan’s embrace of the Islamist organization, which openly seeks Israel’s destruction.

“It’s a terrorist organization. Our advice to any government that has relations with Hamas is that that relationship clearly can bring about no positive result. So, the issue was raised [with Erdogan] for sure,” said Mariaschin.

Mariaschin said he and other Jewish leaders raised a host of matters with foreign dignitaries, including Iran, Holocaust restitution and strengthening and developing relations between Israel and other nations. The group also pressed leaders to take action on the United Nations’ ongoing bias against Israel.

“This year we’re talking about the [U.N. Human Rights Council-sponsored] Commission of Inquiry against Israel. This commission, which has no shelf life [i.e., no expiry to its mandate], is headed by avowed critics, more than critics, enemies, of Israel. We talked about the need to press those who are leading that commission to resign their positions, because they’re not objective,” said Mariaschin.

Jewish leaders from across the political and denominational also sat down with Israeli Prime Minister Yair Lapid prior to his General Assembly speech on Thursday. While Mariaschin noted that not every Jewish organization is completely aligned with every position of an Israeli government at a given time, “we all came together because of our support for the State of Israel, our support for a strong and viable state of Israel, and particularly here at the United Nations, an organization where under the U.N. roof there’s so much bias against the State of Israel.”

It was vital, he said, that the American Jewish organizations and Lapid meet to show solidarity.

In his General Assembly speech, Lapid said, “I am not a guest in this building. Israel is a proud sovereign nation, and an equal member of the United Nations.” It was part of a deliberate and persistent strategy by Israeli officials at the U.N. of countering delegitimization efforts, including by a Commission of Inquiry member who recently questioned Israel’s standing as a U.N. member state.

Mariaschin noted there has been progress at the U.N. lately with regards to Israel, including the passage of an Israel-sponsored resolution condemning Holocaust denial and distortion and the work to resolve issues related to bias at UNESCO. Still, he said, the U.N. General Assembly meeting is a perfect time to remind world leaders just how far there is to go.

“There was a resolution criticizing Israel for not giving vaccines to the Palestinians when in fact, just weeks before, [Palestinian Authority President Mahmoud Abbas] said he didn’t want Israeli vaccines. There are the [U.N.] Palestinian committees that were set up in the wake of the ‘Zionism is racism’ resolution back in the mid-1970s, that are still there, budgeted and staffed, and their only reason for existence is to delegitimize and demonize the State of Israel,” said Mariaschin.

“There are several Israelis who hold positions now in the U.N. system. That is important, and we have to note it. But, there still is a lot more work to be done,” he said.