Wicked deeds are an abomination to kings, For the throne is established by righteousness. 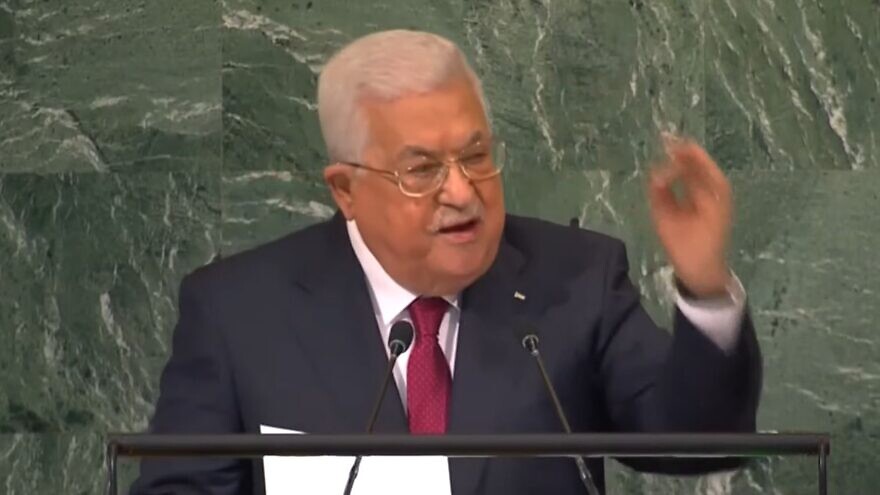 Palestinian Authority President Mahmoud Abbas condemned Israel in the strongest terms before the U.N. General Assembly in New York on Friday, dismissing a concessionary speech made by Israeli Prime Minister Yair Lapid the day before.

Claiming “Israel does not believe in peace” and blaming it for intentionally “destroying the two-state solution,” Abbas accused Israel of a litany of crimes, from killing Palestinians “in broad daylight” to targeting Christian and Muslim holy sites in Jerusalem (“our eternal capital”) to preventing Arabs in Jerusalem from voting in Palestinian elections.

He said the P.A. would pursue Israel in international forums, including the International Criminal Court in the Hague.

He added that Israel committed “50 massacres” and had established “Jewish racist terrorist organizations” led by Knesset members, which waged terror against Palestinians.

Abbas also expressed support for “martyrs,” a Palestinian euphemism for terrorists who have carried out attacks against Israeli civilians and soldiers.

“I would like to pay tribute to the martyrs of the Palestinian people who have led the way to freedom and independence with their blood,” he said.

“I would like to pay tribute to the brave prisoners who are living martyrs,” he added.

Abbas singled out one prisoner, Nasser Abu Hamid, a Palestinian prisoner suffering from cancer, which the P.A. has made a cause celebre.

Abu Hamid confessed in December 2002 to the murder of seven Israelis. He was handed three life sentences and 50 years of additional imprisonment.

Describing him as a “hero and a martyr,” Abbas admitted that Abu Hamid had “committed a crime” and then accused Israel of having failed to provide medical treatment for his cancer or of allowing his mother to visit.

It was only toward the end of his speech that Abbas acknowledged remarks by Lapid and U.S. President Joe Biden at the U.N. General Assembly in favor of a two-state solution.

“This is, of course, a positive development,” he said, adding that “the real test” would be if Israel returns to the negotiating table “tomorrow” and stops “expanding the settlements and killing and demolishing.”