PM Lapid endorses Palestinian state at United Nations, but Israelis do not support him

The minds of both kings will be bent on evil; while sitting at the table together, they will lie to each other, but to no avail, for there is yet an appointed term.

Home » PM Lapid endorses Palestinian state at United Nations, but Israelis do not support him 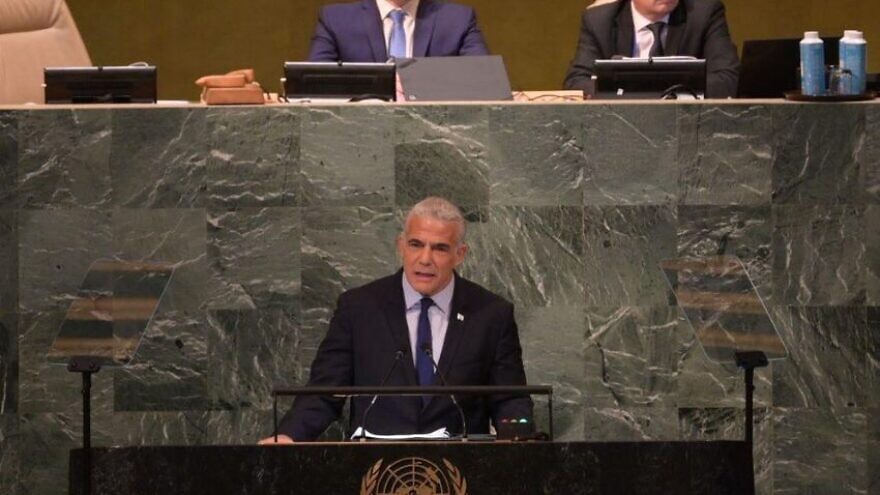 Israeli Prime Minister Yair Lapid supported the creation of a Palestinian state in a speech addressing the United Nations General Assembly on Thursday, sparking a swift denunciation from Israel’s right.

“Despite all the obstacles, still today a large majority of Israelis support the vision of this two-state solution. I am one of them,” Lapid said.

The two-state solution calls for the creation of a militarized Arab state inside the borders of Israel that has been ethnically cleansed of Jews and with its exclusively Muslim capital in Jerusalem.

“An agreement with the Palestinians, based on two states for two peoples, is the right thing for Israel’s security, for Israel’s economy and for the future of our children. Peace is not a compromise. It is the most courageous decision we can make,” he said.

Lapid added that Israel has “only one condition: That a future Palestinian state will be a peaceful one. That it will not become another terror base from which to threaten the well-being, and the very existence of Israel. That we will have the ability to protect the security of all the citizens of Israel, at all times.”

“Now he intends to give them a state of terror in the heart of the country, a state that will threaten us all,” he added.

Yariv Levin, No.2 on the Likud Party Knesset list after Netanyahu as well as chairman of Likud and the opposition faction, said Lapid “surrendered shamefully” to the Palestinian Authority and “dealt a fatal blow to Israel’s political standing.”

“Instead of standing up to the world and saying out loud that the Land of Israel belongs to the people of Israel, Lapid bowed down to the haters of Israel,” he said, adding that Lapid had undone years of political achievements pushed through by Netanyahu.

Former Israeli Ambassador to the U.N. Danny Danon accused Lapid of focusing on the Nov. 1 elections in Israel. “The spotlight that Lapid turned on the Palestinian issue instead of the Iranian threat proves that Lapid is only concerned with his election campaign and not with promoting the interests of the State of Israel,” he said.

According to a July survey conducted by the Israel Democracy Institute, only a minority of Israeli Jews (32%) said they would support a peace agreement between Israel and the P.A. if it meant dividing the land of Israel into two states. A survey published in Mako News on Friday claimed that 28% of Israelis support a two-state solution. In the same Mako survey, 28% of Israelis agreed that Lapid was suited to continue in the role of prime minister whereas 46% supported opposition leader Benjamin Netanyahu.