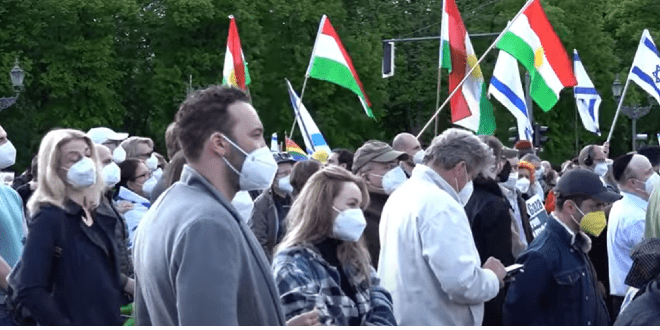 Protests have continued in Iran, according to reports posted on social media, after a woman was killed by Iran’s morality police.

Mahsa Amini, 22, was on a visit to Tehran with her family when she was detained by a police unit according to reports. She subsequently died after the encounter, having fallen into a coma. Tehran police have confirmed Amini had been detained with other women.

The “morality” police are the oppressive frontline of the Iranian regime and they are used primarily to target women for not dressing in a modest manner.

According to one video posted by a user called @Iranhrm there were protests in western Iran and state security anti-riot units had to be posted outside the governor’s office to stop the protests.

There has been an outpouring of anger in Iran that has even caused the regime to react. Iranian President Ebrahim Raisi has reportedly ordered the interior minister to open an inquiry into the case.

Reports have also appeared on Iran’s Fars News pro-government media about the incident. This shows the government is concerned about the killing and knows it cannot merely hide it.

Iran’s regime is deeply oppressive but nevertheless tries to have a veneer of legality to its conduct. This means that although it has massacred protesters in the past and often hangs people after trials that do not meet fair standards, it still tries to explain itself to its own people and the world.

Protests get shut down by police

Images posted to social media show security forces brutalizing protesters. The apparent killing of a woman for not wearing her hijab or headscarf to the standards of the “morality” police has outraged average people.

People in her hometown have expressed anger and blamed the government for killing the woman. In towns near Saqqez, a video shows women removing their headscarves in protest against the regime. This is an area in western Iran where many of the people are from the Kurdish minority. The Kurdish media outlet Rudaw notes that Amini was Kurdish.

“The sudden and suspicious death of a Kurdish woman held in an Iranian prison on Friday has caused an outrage on social media, with her family vowing to file a lawsuit against the police.

“Mahsa (Zhina) Amini, 22, was detained by Iran’s morality police, which enforces strict rules like compulsory headscarf on women while visiting the capital city of Tehran earlier this week. Hours later, she was taken to a hospital where she passed away on Friday,” Rudaw says.

“Kiaresh, her brother, told media outlets that he was waiting outside the police station in Tehran for his sister to be released when an ambulance suddenly transported her to a hospital. He was later told that she had a heart attack – something the brother doubts,” the report says.

“There were only two hours between her arrest and being taken to hospital,” he said, adding that “I have nothing to lose. I will not let this end without making a noise.”

Iran’s regime has tried to claim that she suffered from a heart condition. However, she was young and protesters do not accept this explanation. People have posted graphic images, showing her in a coma before she died.

Artists and others have contributed to making protest posts and the hashtag about her death has been spread widely. One report by @no_itsmyturn said that there had been more than one million tweets with the hashtag.

Iran pro-regime media Fars News says it consulted sources that say Amini had cardiac arrest, and after being resuscitated, she suffered cardiac arrest 2 more times and was revived again.

The report claimed she had type 1 diabetes and said that she died after being taken to the emergency room and after doctors tried CPR. “Before this, the counter-revolutionary media had announced the cause of death as a beating by the police, but a few hours ago, the police released a video.”

Overall the sense in Iran among those who are protesting is that this is one more example of the regime’s callous brutality and the impunity of the police to beat and harass and kill ordinary people.